Media stories insinuated that Biden was beloved during the visit in his role as “Comforter in Chief” while Texas Gov. Greg Abbott was allegedly reviled by his own people. But the articles painted a distorted, incomplete picture of the mixed reactions to Biden during his trip to Uvalde. 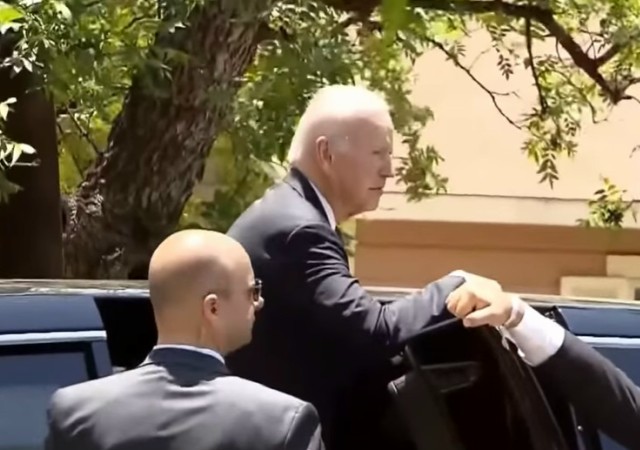 During their visit, the Bidens attended a memorial service held at the school for the victims and afterward went to Mass. President Biden also reportedly met with the family members of some of the victims and first responders.

As the Bidens arrived, they were greeted with a smattering of “cheers” which sounded like just a few people clapping and cheering out of a crowd of both locals and demonstrators from other parts of the country.

President Biden and the First Lady arrive at the memorial for the Uvalde victims at the Robb Elementary School.

The crowd cheered for them as they walked up. pic.twitter.com/pAXZDHpOCo

Texas Gov. Greg Abbott was also at the memorial service. As he arrived, Abbott was met with some scattered boos and calls for “change,” as seen in the below video clip:

#Happeningnow Crowd Boos Texas Gov Greg Abbott as he arrives at the memorial outside of Uvalde Elementary School.#Uvalde #Texas pic.twitter.com/QWDOfXcvEw

Many of the stories insinuate that Biden was beloved during his visit as “Comforter in Chief” while Abbott was allegedly reviled by his own people. But the stories paint a distorted, incomplete picture of the reactions to Biden during his trip to Uvalde.

As Biden left Mass on Sunday, the crowd that was gathered there had a mixture of reactions, with several booing and jeering while others yelled “do something!” and “thank you!” The boos are faintly heard in the first clip and better in the second, shorter clip:

A group of demonstrators outside Sacred Heart Church in Uvalde, TX today shout "Do something," as President Joe Biden and FLOTUS Jill Biden depart mass.

"We will!" Biden tells them, before heading to a meeting with families of the victims and survivors from Tuesday's shooting. pic.twitter.com/mmq9FJMzxf

CLUELESS: President Biden looks absolutely CLUELESS as residents of Uvalde boo and chant “DO SOMETHING” as he leaves Catholic Mass in Uvalde Texas | @TPUSA pic.twitter.com/NnED5IZ2dK

Apparently, the agitated nature of the crowd bothered the Secret Service so much that they didn’t allow Biden to walk up and talk to them:

HAPPENING NOW: “DO SOMETHING! DO SOMETHING!” Uvalde residents exclaim to President Biden.

Secret service told the community President would meet and shake hands with them, but is met with angry chants and instead leaves.

This after Catholic Service in honor of victims. pic.twitter.com/kgaGIoKLzc

Also left out of most media reports I’ve seen is that the small group booing Abbott as he arrived at the school memorial service were Biden supporters, according to Dallas news station WFAA:

While some people came to pay their respects, others came to have their voices heard.

”We need change governor,” voices cried from the crowds

Gov. Greg Abbott was booed by some of the president’s supporters when he arrived.

In addition, KERA immigration reporter Stella Chavez was asked by CNN’s Brian Stelter on his low-rated Sunday morning “Reliable Sources” program about how people felt about Biden coming to Uvalde. Her response confirms there while there were mixed reactions about the visit, it stoked “a lot of outrage”:

“I think it depends on who you ask,” Chavez said during an appearance on Reliable Sources. “I think, for the most part, the families who were affected want to focus on their loved ones who were killed. And I think having the leader of our country come here and express, you know, his condolences is important to them. But I also know, I’ve heard people say, you know, now is not the time for him to come here.”

Asked why that is, Chavez said, “I think some people are concerned about politicizing this event. And I’ve heard a lot of outrage from people. But I’ve also heard from folks who say, ‘I don’t want to focus on that, on what could have happened, what should’ve happened, I just want to focus on the kids.’ So I would just say it depends on who you ask.”

Understandably, after these unspeakable tragedies, people look to leaders to “do something” regardless of party, but they are also not shy about expressing their anger towards those same leaders. So it’s not surprising at all that the reactions were what they were to Biden and Abbott, to the extent that the handful of people either cheering or jeering are definitive and reliable indicators of majority sentiment in one way or another in the area.

The problem here is not so much how the people reacted – although a convincing case could be made that maybe memorial services and Catholic masses aren’t the places to do it – but instead how The Usual Suspects on the left and in the press portrayed it for partisan gain. Ideally in these situations, politics would be put on the back burner as people from different backgrounds came together to work on solutions that make communities safer while not infringing on the Constitutional rights of others.

But as history has shown us repeatedly, Democrats and their media allies never let a crisis go to waste and never hesitate to obscenely politicize things – in some cases, even as the events are unfolding. That is, unfortunately, pretty much what happened Sunday, which is why it was worth correcting what was initially reported to have happened, just for the record.

If you
Feel comfort from Biden, you’ve already lost

I don’t even pay attention to this corrupt pervert and his teleprompter.

Rather, my eyes and ears are on the psychos behind the curtain.

It’s very much like the situation where the crowd was shouting “F.U. Biden” but the kindly reporter, attempting to protect Biden, flipped to something else.

This type of thing is very common. When Biden missteps, screws up, falls down, says the wrong thing, makes a fool out of himself, his handlers quickly step in and twist it, flip it, or cover it up.

Not boo, Biden. They were calling out Beau Biden.

They keep telling Brandon he is in charge and beloved. But, His cognitive skills have declined.

Have you noticed the CHANGE in F Joe Biden? The numerous trips to his Delaware basement are less, his stride is less Parkinsonian, his longer trips more often! It’s almost as if there is a new and different FJB.!! Dementia is one way…a U-turn means someone else. Paging Mark Twain.

How much of the Ukraine $ will get diverted to make schools less “soft” as targets? None…ok- just so we’re clear on that.

Schools are swimming in COVID cash and diverting it to CRT usage. Just so we’re clear on that.

I know all I need to know about our “do something” leaders.

Biden is doing something. He is threatening to take away Free Lunches for Poor Kids.

It’s not the job of schools to feed students: that’s parents’ jobs.

Hasn’t it been the practice, for thousands of years, to pay people to boo/cheer?

It’s certainly been a practice of late to bus your supporters in to seed the crowd, as was the case here.

Very few people are fooled by this kind of fake news. It’s too common, too transparent and, frankly, too bizarre to be given any credence.

The only ones who fall for it, want it to be true.

According to official White House sources, people there weren’t booing Biden.
They were booing some guy named Brandon.

A memorial for murdered children and teachers isn’t the place for partisanship or bickering no matter their ideological beliefs.

I miss when we used to be humans.

I miss when we used to be free humans.

Biden says you are free to do what you are told.

I’m concerned at the idiots who were yelling “Do something!” They don’t realize that this administration is particularly inept at finding a solution to a problem that doesn’t align with their narrative.

I have no doubt as to what that ‘something’ will be, and that it will do exactly nothing to prevent this kind of tragedy.

“Mein Furher: DO something!”

We’re not gonna fall for that again, are we? (Or allow weak people who do to drag the rest of us into fascism)

I”m wondering how many of those people that “Cheered for Biden” and “Booed for Abbott” actually were Uvalde citizens and not just people shipped in just to get those reactions. I wouldn’t put it past the Biden regime to do just that to further their twisted political agenda.

All the people cheering Brandon were illegal aliens. Americans were booing

HERE’s one for robinette bidet joe ho
PPPFFFFFFTTT! hope you get ALL the odor and it’s effect’s.
ITS SPECIAL! just for TURDS like you bidet!