Israel’s Ynet News: “[S]everal marchers were attacked and injured by Palestinians in several locations around the Old City in the clashes that preceded the rally.” 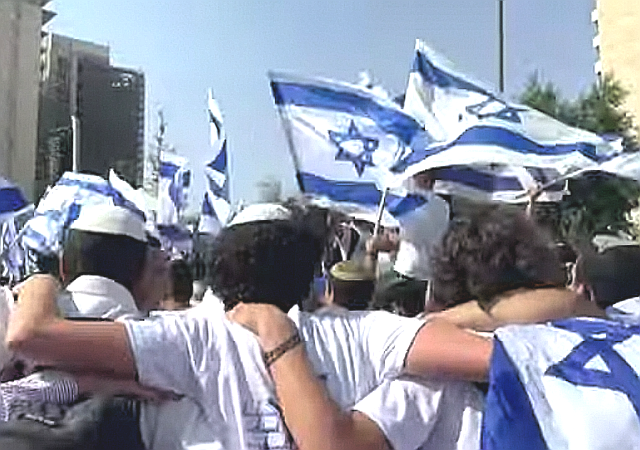 Despite threats from the terrorist group Hamas and violent clashes by the Palestinian mobs, tens of thousands of Jews and patriotic Israelis marched through the Holy City to mark this year’s Jerusalem Day. “Over 50,000 Jewish nationalists were marching through and around Jerusalem’s Old City on Sunday afternoon to mark Jerusalem Day,” The Times of Israel reported.

The annual Jerusalem Day March celebrates Israel’s taking control of the Old City and East Jerusalem in the 1967 Six-Day War. The flag march draws thousands of Israelis to the Holy City each year.

[Thousands of] flag-waving Israelis poured into the narrow, stone streets of Jerusalem’s Old City to celebrate its reunification in the traditional flag march.

Ahead of the main rally, large crowds of yeshiva students and other jolly civilians marched through Old City and other parts of the capital singing and dancing in impromptu parades. (…)

Other rallies were held in Tel Aviv, Rishon Lezion and other locations all over the country.

“Meanwhile, several marchers were attacked and injured by Palestinians in several locations around the Old City in the clashes that preceded the rally,” the Ynet reported. “One bandaged marcher who was covered in blood told a Ynet photographer he was hit on the head with a bottle of beer, and that he also suffered a cut to his hand.”

“Video reportedly from the scene showed police closing the doors to al-Aqsa mosque with chains as rioters inside threw chairs, fireworks and other objects onto security forces from windows above them. During the visits to the Temple Mount in the morning,” the newspaper added.

There were reports of injured Palestinian rioters following their clash with the police and Jerusalem Day marcher in and around the Temple Mount. “The Palestinian Red Crescent says it has treated 40 people in and around the Old City since this morning, amid clashes on Jerusalem Day. According to the emergency service, 15 of those injured have been taken to hospitals.” The Times of Israel reported. The news website noted that the injuries to the Palestinian rioters were cause as they “clashed with police on the Temple Mount, and with Jewish Israelis in the alleyways of the Old City.”

Hamas Threatens Israel With “War” Over the March

Gaza-based terrorist group Hamas threatened Israel with “war” if the march was allowed to go ahead. “They can avoid a war and escalation if they stop this mad (march),” senior Hamas official Bassem Naim told Reuters.

The terrorist group told Palestinians to disrupt the march. “Let tomorrow, Sunday, become a public revolt for our people in defense of Jerusalem and the Aqsa Mosque,” Hamas declared a statement ahead of the event.

In light of Hamas’ threats. Israeli is on alter for terrorist attacks and rocket fire from Hamas and Hezbollah terrorist groups. “Security forces are on high alert ahead of Jerusalem Day today, readying for possible rocket fire from both Gaza and Lebanon as well as violent clashes with Palestinians in the capital and the West Bank,” The Jerusalem Post reported.

Our Past Coverage of Jerusalem Day

In recent years, the Legal Insurrection has done several posts on the Jerusalem Day celebrations and its historic significance.

In June 2016, Professor William A. Jacobson was at the Western Wall to witness the march. “Jerusalem Day is a very nationalistic holiday, similar to our July 4th Independence Day, with flags displayed almost everywhere,” he noted in his post.

The day is marked as per the Jewish calendar. As Professor Miriam Elman explained in her informative June 2016 post for the Legal Insurrection, the Jerusalem Day is “held on the 28th day of the Hebrew month of Iyar—six weeks after the Passover seder and one week before the eve of the holiday of Shavuot.”

The day “celebrates the reunification of Israel’s capital city, when Jewish forces brought Jerusalem “back to Jewish sovereignty”,” she wrote. Her post is a must-read for anyone interested in learning more about this historic day.

Footage of the 2016 Jerusalem Day celebrations taken by Prof. Jacobson

The Israeli citizens are many times braver and smarter than their “leaders”.

Hmm, reminds me of the US.

Not when Bibi was in charge, nor many before him.

Yea, even when Netanyahu was in charge.

He presided over the further sinking of Israel. Nothing got better under him.