“U.S. Capitol police are bracing for large demonstrations that are being organized by far-right groups to protest abortion rights” 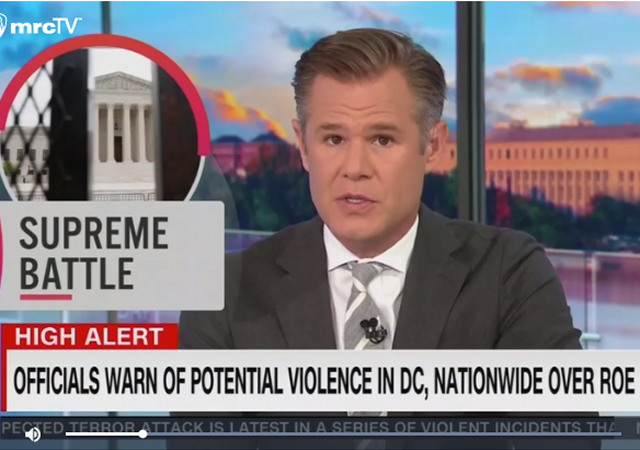 As far left activists are planning to show up at the homes of Supreme Court justices and barge into churches over the possible overturning of Roe, CNN wants you to know that the real threat of violence is coming from the far right.

It is not an exaggeration to say that CNN is no longer a news organization and hasn’t been one for a long time.

This is a complete warping of reality for a political narrative. You might even say it’s disinformation.

As the left continues to threaten Supreme Court justices and engage in acts of violence in anticipation that the Court may strike down Roe v. Wade, CNN’s New Day finally got around to covering hypothetical Roe-related violence…from the “far-right.”

Well, here in Washington and all across the country, law enforcement is bracing for potential violence following the release of the Supreme Court draft opinion that was published earlier this week on Roe v. Wade. CNN has learned that the U.S. Capitol police are bracing for large demonstrations that are being organized by far-right groups to protest abortion rights. CNN’s Whitney Wild is live this morning outside the Supreme Court with the latest. Brittany, sorry, Whitney, what are authorities fearing could happen?

Marquardt then introduced law enforcement correspondent Whitney Wild, who was reporting across the street from the Supreme Court which has been fortified with non-scalable fencing. Wild claimed that “several members of law enforcement” have a concern that people “could use the Roe v. Wade opinion as justification for that. And that could include the possibility that someone would commit an act of violence against abortion providers, against the clinics, against members of the judiciary, members of the federal government, and that also includes members of the Supreme Court.”

Here’s another segment on the same topic:

Ah yes. The BLM linked group putting the addresses of six Supreme Court Justices and their families up on a map for harassment is totally coming from the right. Ridiculous. https://t.co/kp1mGedks6

Tucker did a great, and very sarcastic, segment on this last night. Check it out:

According to CNN, the real threat to Supreme Court justices and our justice system comes not from people who are mad about Alito’s opinion, but from people who are happy about it. The ones who are celebrating are the dangerous ones.https://t.co/E6eKMTWpLD pic.twitter.com/9QLNcs0Bay

Tucker then brought on Buck Sexton who gave a possible reason for why CNN is doing this. His theory is that if something bad happens, the liberal media wants to be able to say that tensions were high on both sides:

Democrats are the ones that freak out when they don't get their way through childish tantrums. They don't petition the court. They threaten to or try to burn down the court. pic.twitter.com/EPb0YERN8A

Will CNN get a call from the Disinformation Governance Board? I’m guessing no.

Tucker Carlson had a field day with this last night. his opening was all about how these “right” wings were doing this along with the summer of love.

Been saying big IF the leader’s magic works it could be but no where near as violent as Leftists would.
Get 1 Judge to change opinion ( via Roberts on Obama Care) it sinks and Leftists win.

And the Democrats Propaganda Ministry still pushing the Jan6 insurrectionists

Wow. That is staggeringly stupid, even for CNN.

It’s never been ab out being ‘intelligent’ – the limo libs need their marching orders.

I have a different theory about why CNN would completely reverse the truth this way.

They don’t like it. The truth makes them feel bad. And we all know that bad emotions are traumatizing. So they said something that made them feel good instead.

That, and their remaining audience, regardless of how small, will eat it up with a spoon.

Irv, what theory is required? The American left has adopted Hitler’s Big Lie theory. Pelosi and Schumer have been spouting Hitler-grade lies DAILY for years.

Great Maker, the only people that might believe CNN and this nonsense are the lunatic left. But that’s sorta the idea. Get your political base all worked up over a non-issue right before the Nov. 2022 midterm elections where you’re generally acknowledged to lose, and lose big, to your Republican rivals and hope that’s enough to pull you through. Of course, it won’t be enough. If you think this is bad then you ain’t seen nothing yet. As the democrats get increasingly desperate over the outcome of the 2022 midterm election you can be assured that more hysterical & lunatic nonsense will be coming from the propaganda department of the democrat party (aka CNN).

The midterms will be so rife with cheating and fraud that it may be much less a blowout than it rightfully would be. Who’s going to stop the millions and millions of very-recently imported illegal immigrant non-citizens from voting? Certainly not democrats. I don’t know how we stop it either, but we’d best be getting organized to do something other than sit by and watch it happen.

It is their only hope.
Video everything, and make sure you let poll workers know every move is being observed.

Illegal to record in a polling location

2018 elections were the last real elections America will ever have. Democrats WILL steal the elections in November. Losing would mean:

From the far right eh CNN? Suuuuuuuure it will!

Cue fbi entrapment plots in 3, 2, oh who are we kidding! They were probably already underway before this story even broke!

This is stupid. Who does CNN think they are fooling? The Two Joys aren’t that silly.

For those following along: I don’t have Pomona pneumonia. None of the Petri dish things are showing anything. I’ll be talking with someone from infectious diseases later today. Based on my recent travel history, it could be valley fever.

There have been great advances in treating Valley Fever over my lifetime. 40 years ago, doctors had no idea what caused it. Now they know it’s fungal and affects both people and dogs. Lives in the soil, only in this area, and is disturbed by our constant construction. Everyone who lives in the area for more than a couple years “gets” it, but most have no ill effects. If you don’t live here permanently, often just leaving the area is enough to get it back into remission. Hope that’s all it takes for you.

They are fooling all of their regular viewers who drink their kool aid daily. The viewers say thank you and ask for more.

This is the same crap they did with the Tea Party rallies. I attended 8-9 of these rallies and they were never more violent than a typical family picnic, moms pushing strollers, business men in suits skipping lunch to attend, people walking their dogs…. Yet CNN and their ilk would be reporting “although there were no reports of violent incidents, the atmosphere of impending violence was palpable”. Is there anyone left who still believes anything these turds say?

“Is there anyone left who still believes anything these turds say?”

The vast majority of Biden voters (i.e. 2/3s of California and NY).

The DNC have been projecting for a couple of decades now. I think this means that the liberal left is planning for violence and trying to divert blame. It will wave this headline to claim it wasn’t them.

I’m anticipating a kitchen sink filled with a deadly viral soup to be tossed.

The people who worry me are the millenials still clinging to their masks. a) you aren’t in danger. b) you were never in danger. I am amazed that they can maintain bodyweight on a diet of pure kool-aid.

It will be a repeat of the right-wing violence that occurred when Roe v. Wade was initially decided, i.e. none. Liberals projecting their own craziness on their enemies again.

The Democrats are a fascist party no ifs ands or buts.

The Babylon Bee could just take this CNN article as-is and post it there. It’s already so absurd one could hardly do anything to make it more of a parody of itself than it already is.

This is an alternate pressure-SCOTUS strategy. Prepare the battlespace by blaming the “far right”, arrest some protesters alleged to be “far right”, most likely a false flag op, and then pressure SCOTUS to disavow the “violent far right” by reversing this decision.