It’s not stopping road trips. A GasBuddy survey found that “58% of Americans plan to road trip this summer.” 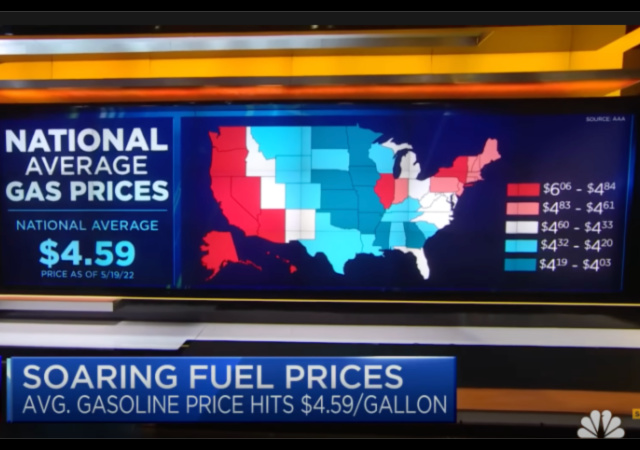 Fox Business reported that gas averages at least $4 a gallon in all 50 states. I know ethanol gas is under $4 here in OKC but non-ethanol gas (which I will always choose!) is above $4.

AAA spokesman Andrew Gross said: “The high cost of oil, the key ingredient in gasoline, is driving these high pump prices for consumers. Even the annual seasonal demand dip for gasoline during the lull between spring break and Memorial Day, which would normally help lower prices, is having no effect this year.”

Houston, home to many refineries, hit over $4.00 a gallon for the first time in the city’s history. The city averages $4.16 a gallon for regular unleaded. Dallas and Fort Worth average $4.40 a gallon.

I’m still planning on my Boston road trip with my mom! Four days to get there, stopping at Revolutionary War and Civil War battlegrounds. It’ll be fun.

I’m not the only one who still plans on hitting the road. A GasBuddy survey found that “58% of Americans plan to road trip this summer.” This is higher than last year when America averaged $1.50 a gallon.

However, two-thirds of the 58% have not confirmed any plans. Inflation is also a thorn in their sides.

Still, though, the numbers are impressive:

“Against a backdrop of gas prices that have continued to set new records ahead of Memorial Day, Americans have been resilient in their desire to hit the road, but we’re certainly seeing increased hesitancy due to rising prices at the pump. Soaring inflation has led to uncertainty over rising costs,” said Patrick De Haan, head of petroleum analysis for GasBuddy. “The COVID factor is still present, but has been dwarfed by Americans’ concern over high gas prices and dwindling affordable travel options to make use of the best months of the year.”

Nearly 70% of people surveyed said their travel plans have been affected by high gas prices, an increase of 24% over 2021. While more than one-third indicated that high inflation has made planning more difficult, and the majority (65%) are taking only one or two road trips.

“It’s making it hard for people to be able to plan when costs are constantly going up,” said De Haan.

“Consumer confidence is lower than we’ve seen in many years. Some sources even suggest that confidence is lower than during the 2008 recession,” said Dafna Gabel, vice president, Strategic Insights for PDI Software. “Those surveyed in 2022 shared that inflation has impacted behavior at the pump and in-store across the U.S., and barring significant shifts in inflation, these behavior adjustments are expected to continue.”

“We’re seeing gas prices kind of disconnect with the price of oil because refineries are struggling to keep up with insatiable demand,” said De Haan. “So, it’s going to be a pricey summer.”

What more can anyone say than WAY TO GO, YOU RETARDED PEDOPHILE BASTARD!. Let’s Go Brandon

Choosing to drive IS, in fact, the effect of inflation:

People aren’t flying as much or taking more expensive vacations due to the increased travel costs. Cars are more economical than the other modes.

I’m all prepared. I have $10,000 saved up for emergencies so that when the SHTF I’ll be able to buy enough gas to last till next Tuesday. But if my family is hungry I will buy 4 cheeseburgers and one large fry instead.

And not just the price of the alternatives.
People take road trips because they don’t want to be stripped and anal-probed at airports, disarmed and subjected to vax mandates by cruise lines (and then quarantined anyway), demean themselves by applying for the humiliation of a REAL ID, and every other indignity dreamt up by our police state since the Patriot Act. Driving down highways was the last remaining way to vacation in full liberty. So they made it ultra-expensive. Fuck them, they won’t rob me of my retirement. If I have to pay it to stay free, I’ll pay it.

Biden, or better said, his handlers, are not worried about soaring gas prices.
This is actually what they want, and they most likely see it as an achievement.

Google upstream oil investment and you will see that in 2014 when Obama asked the banks to start shifting the loans from oil and gas production to green projects, they did.

When you pay 3 to 4 times more to heat your home next Winter than last Winter, you will know why.

Not mentioned is the 1 million bpd less refinery capacity Nationally today v 2019. Sending refined stocks abroad doesn’t help either. The North East is about to have a very tight diesel and aviation fuel market due to drawdown in stock and the regional lack of refinery capacity. North east dropped 850K bpd in refinery capacity in the last five years.

Normally, the USA actually exchanges refined stocks with Europe. They use more Diesel and we use more gas. So, we send them diesel and they send us back gas. But, with the shortage, Europe has no gas to send us. And, we are actually backing off on diesel exports. The US refiners ran at 95.1 % last week and exports of diesel were down.
That should help ease the immediate crisis.

It just goes to show that nations can commit suicide the same as people. In our case, Democrats and Republicans are like Chinese twins joined at the spine. What one does affects the life of the other.

One has been swallowing poison while the other is drinking Kool aid.

Biden’s crippling of the gas and oil industry also has a direct effect on food prices. My wheat farmer friend says that his “job is converting diesel fuel to wheat.” Also, you have more diesel fuel required to get the food to market.

So food prices are strongly linked to fuel costs. Biden wants to curtail oil production and force us to buy electric cars, but that won’t produce food. To produce food, you need tractors and combines, which need diesel. Every time Biden closes a pipeline or cancels oil leases, it raises food prices.

The day he announced the shutdown of the XL pipeline and drilling on federal lands I said well there goes the economy,wish I was wrong.

We were already seeing a global shortage of Nitrogen fertilizer due to the high cost of natural gas. Europe (with the exception of Russia) shut down their fertilizer plants because natural gas was too expensive. Africa and Asia followed. Then the Chinese shutdown phosphate exports and the Ukraine war shut down potash exports from Russia and Belarus.

There is a technical term for this: Fucked.

Time for the American Petroleum Institute to tell The Hologram to go pound sand, then open up dormant rigs and pumps, and restart Keystone….they WILL have the full support of real American’s.

This “support” will amount to what exactly?

“Support” isn’t going to accomplish a damn thing- ONLY ACTIVELY ENGAGING IN SOLVING THE PROBLEM is.

Step #1 is to de-RINO the GOPe and replace with true MAGA conservatives who have both a brain and a backbone.

Fail on that step and the rest is impossible.

At this point it is just cruelty from this administration why they do not open up lands to more oil drilling.

No, its not cruelty, its cause and effect- straight from Marxism.

Petroleum ( not just gas but everything ) is a lynchpin commodity. It touches everything in terms of driving costs.

The #1 goal of the left is to take the “wealth” of the US middle class and business in general ( defined as everything from property, business, holdings and even cash) and get it “redistributed”.

It creates an artificial “entitlement” class who got that benefit from the redistributed which often act as “overseers” for the “ruling class” because they “owe” them.

Don’t believe the hype ( cover story) that the left ( and the RINO) are stupid, dumb, out-of-touch and all that- its all camouflage.

This is meticulously planned for a managed decline and executed with surgical precision- have no false belief that anything short of a true MAGA takeover will stop it.

This is why they hate and have to destroy Trump and anyone who holds those values and the left forms alliances with the RINO and nothing ever changed until Trump.

This might not work though because the automobile grants independence. People understand that fact and will not give up that independence voluntarily. The flip side is that the d/prog hate the automobile not because of climate concerns so much as the independence it grants. See all the flak about suburbs and exurbs. Make gas too expensive and folks might abandon these locations. Do it nationwide and there’s no need for sweeping zoning reforms in every County, Town or Village.

That’s my point. Theoretical outcomes as the result of esoteric behind the scenes policies are hard to explain.

Rising fuel prices to the point of demand destruction and blatant, public calls for getting rid of ICE vehicles is something everyone can understand.

everyone talks about gasoline while seldom mentioning diesel…the fuel
that delivers the gas to the stations. same fuel delivers everything to your stores, grows your food,etc.
right now I have had to add 10$ per hour of tilling (one hour min since most jobs take 20 minutes) just to pay for the offroad diesel (NOT taxed) running 5.80-6.40 a gallon while on-road would be lucky to find it below 6.50/gallon. also have to cover the gas used to haul the tractor/tiller around as well as mtx on tow vehicle,tractor,trailer.
and its (diesel) going up here locally tomorrow by another 15cents.
part of the high cost of gasoline includes the delivery costs that diesel drives.