Processing has sped up, but will it stick? After all, ICE is preparing for a “historic” surge of migrants at the border. 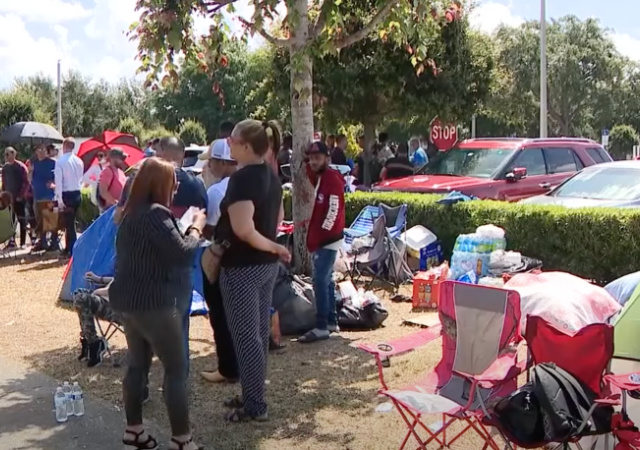 The border crisis is not just along the Rio Grande. It’s affecting the country.

The migrants who do not get expelled by the border patrol have to show up at the local ICE facility where they choose to live.

Orlando’s ICE office saw lines wrap around the building with people camping outside waiting to be checked in. The lines consist of recent arrivals and illegal immigrants. The office had 250 people waiting outside last week.

The Orlando facility encouraged people to make appointments, which might be helping. But will it stick? If the Biden administration gets rid of Title 42, the number of people coming into America could triple.

ICE is already preparing for an “historic” surge at the border:

But it is the latest sign of the pressure that ICE and CBP have been under due to the massive migrant surge at the border. More than 221,000 migrants were encountered in March, and that number is expected to rise in the months ahead — particularly with the end of the Title 42 public health order later this month. That order has been used to quickly expel migrants since March 2020 due to the COVID-19 pandemic.

ICE said in August 2020 that there were approximately 3.3 million people on the “non-detained docket,” meaning those who are in immigration proceedings but are not being detained. Last month, in a report delivered to Congress, ICE said that number was now 3.7 million. CBP statistics, meanwhile, indicate that more than one million people have been released into the U.S. since February 2021. More than 65,000 migrants were released in March alone.

Florida Gov. Ron DeSantis warned people not to come to Florida, reminding the migrants that Biden has made promises no one can keep:

“Life will not be easy for you, because we are obligated to uphold the immigration laws of this country, even if our federal government and other states won’t,” the statement said. “Florida is not a sanctuary state, and our social programs are designed to serve the citizens of our state. The governor will protect the sovereignty of the state of Florida.”

The governor’s office said that those migrants “have been done a great disservice by the Biden administration.”

“They have encouraged you to make dangerous treks, oftentimes at great physical distress to you and your family,” the statement said. “Sometimes, this has even meant putting your fate into the hands of dangerous coyotes and human traffickers.”

“There is a legal process to obtain full American citizenship, which is an essential part of the promise of America. In Florida, we will uphold the law,” DeSantis’ office said.

I amazed that there are some people showing up!

Can a president be charged with treason?

Biden isn’t ‘president’, but he’s accountable. His inner circle (his idiot wife included) are traitors, including the real person pulling the levers: Obama, and at the behest of the likes of Soros and Xi.

Our government is at war with us.

Not Biden. He’s fully protected with ten layers of insulation, not counting his Depends. He can’t even be charged with missing half of his brain.

And Bitch McConnell isn’t even PRETENDING he’s going to do a thing about it if the RINOs make him Senate ‘leader’ again.

Anyone hoping to salvage McConnell: I have a rino I want to sell you. Putting McConnell anywhere near GOP senate leadership is surrender. So is making that wimp McCarthy Speaker in a GOP House.

I thought DeSantis was shipping them back or to Dc, Vermont?

The center is NOT holding

Load them up on the next train to Delaware or DC. Ilhan, the bruthahumpa’s, community could used a few thousand, as well.

Four words: Blow darts and buses.
Or boxcars. At this point, I don’t care.