Fight Against School Equity Agenda And De-Leveling “Being Won on the Ground by the Parents” In Barrington, Rhode Island

Fight Against School Equity Agenda And De-Leveling “Being Won on the Ground by the Parents” In Barrington, Rhode Island

“A student doing well in a subject doesn’t take away from another student, but it’s this ideology of diversity, equity and inclusion” 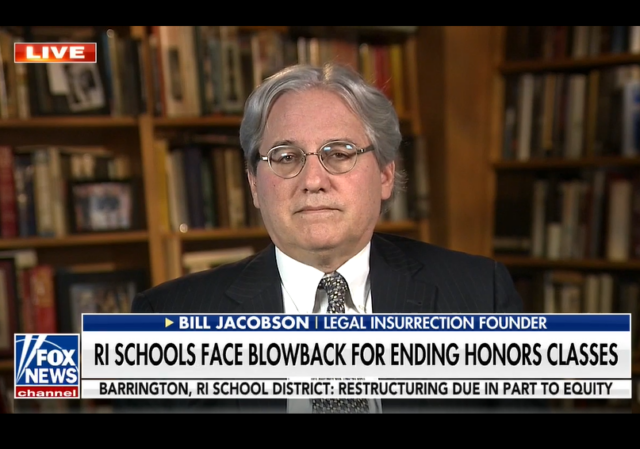 Coverage by Fox News went viral, Rhode Island parents enraged at school board for removing honors classes in ‘equity obsession’. I was quoted in the story:

Bill Jacobson, a long-time Barrington resident and founder of Legal Insurrection, said, “De-leveling is part of an agenda of equalizing outcomes. This equal-results approach stems from critical race theory and diversity, equity and inclusion, which posit that unequal outcomes are the result of systemic bias and discrimination. ‘Equity’ in particular is the codeword for bringing high achievers down to equalize outcomes,” Jacobson said. “‘Equity’ has become an unhealthy obsession, and parents are seeing the impact.”

Barrington mother Ellen Schaffer was featured in our prior post, and was interviewed today on Fox & Friends First:

Parents of Barrington, Rhode Island schoolchildren are expressing their outrage after the school district decided to eliminate honors courses under a new “equity and inclusion” agenda.

Ellen Schaffer, a mother outraged by the rationale, slammed the school district Wednesday for its attempt to create a melting pot of students of all abilities, telling “Fox & Friends First” host Todd Piro that students need a more “tailored” approach to reach their full potential.

“That’s the rationale, but how it happens really doesn’t turn out that way,” she added.

“It’s hard for a lot of parents to accept that there’s maybe something greater at play that isn’t just what we can take at face value,” she responded, adding, “Really, if we want to work in the name of equity, we need to focus on equal opportunity…”

“I think it’s something that can be won, but it’s being won on the ground by the parents who have kids in the school system right now. And what’s remarkable is that it is across party lines. Over 500 parents signed an open letter, protesting this and stating we are Democrats, Republicans and Independents — and independents are about half of the voters in the town. So it can be won because now the parents have awakened to this woke agenda and de-leveling is just code word for it’s often called equity. It’s called other things, but it’s trying to prevent anyone from excelling because it might make others who don’t excel academically, feel bad, but we know that’s not true. It’s always been a source of pride in this town that our math team does so well that our students do so well. A student doing well in a subject doesn’t take away from another student, but it’s this ideology of diversity, equity and inclusion. And this is the equity portion of it, which means everybody has to be equal, but parents don’t want that. What they want is equal opportunity for their children, but allow the gifted children to excel. So it’s really infuriated the community.”

Marxism, achieving ‘equity’ by dragging everyone into the gutter.

Doing away with IEPs for students with disabilities makes school more equitable?

Open up your Blue Books and explain . . .

Was anyone aware that the largest baby formula plant in the United States has been shut down for 3 months and the Biden administration isn’t allowing it to open back up?

Worse, the alleged contamination was not even sourced to the plant, thus creating an inequitable situation for producers, mother, and child. This is reminiscent of Biden shutting down the oil pipeline, then hunting (pun intended) for foreign servicers.

Abbot Labs announced the plant would be up and running in 2 weeks. The bigger story is that the FDA shut down the plant over 4 cases of possible contamination at the plant which turned out to be false. 4 cases. Add the FDA to the list of federal agencies that need a thorough housecleaning.

We’re not in Kansas anymore…..

Wasn’t she the one that showed a video of someone in her computer wiping the hard drive in real time?

The School Boards were just beginning to play with hetrogenous vs homogeneous classes back in the late ’50s.
Homogeneous classes are much simpler for teachers: they don’t have to be bothered with answering students brighter than themselves; they can just shame the brighter students (and their parents) into “helping Dumb Danny”

“A student doing well in a subject doesn’t take away from another student. ”

It’s that way now but it wasn’t always. Grading ‘on the curve’ was designed to distribute grades using a bell curve which guaranteed a certain number of A’s and F’s. I was in a class where 100% was an A and 92% was an F. If you were lucky enough to be in a fraternity or sorority that circulated the answers to the test, you were OK. I sincerely hope those days are gone.

And significantly embarrassing for the lower performers.
We really need more emphasis on trade vs college tracks.
I was being privately taught calculus in 8th grade while classmates struggled with basic algebra. My teacher let me work 1on1 with kids in the back while he taught the rest. They were embarrassed and wanted to drop out. And some did in HS.

They should have been given trade instruction. They could have been taught plumbing, welding, carpentry which all would have involved basic math. Those are the types of math problems I made for them. And sports math taught them percentage, average, trends etc.

So anyone who doesn’t know calculus or struggles with basic algebra (in the 8th grade) should be tracked into trades? How wonderfully condescending!

No. However, all forms of general federal education assistance; Pell grant, subsidized loans, should have a minimum threshold to meet that matches the difficulty of a particular academic program with student ability to comprehend, complete and graduate in that program.

If someone of average intelligence and a demonstrated academic competency that scales as average wants to pursue an academic career path in theoretical physics and pays their own way that’s fine.

If they want Uncle Sugar to pay for that then hell no.

One has to lament the passing of the classical education. The proponents of “equity” apparently never heard the legend of Procrustes and have created the educational equivalent of his famous bed (with, sorry to say, the same result for the poor victim forced to lie in the bed).

All very laudable, but the leftward drift is unstoppable. An occasional win (usually reversed by subsequent chicanery) only provides false hope. More sweeping and messy measures are called for.

Leftists are “levelers,” and levelers NEVER level up.

Growing up, my closest friends were Jewish. I learned a lot from them. My father was the “don’t speak unless spoken to” kind of parent. My mother had her own struggles with anxiety and depression.

So it was really my overachieving Jewish friends that made me a more serious student and made me want to excel. Their parents pushed them to excel, and I learned by their example.

I saw the same commitment to academic excellence in Japan. And my Japanese wife demanded it in our children.

What a disgrace it is to stigmatize excellence in education. We’re all the poorer for it.

Wife on school board one of last single room school houses in State. Mainstreamed kid with behavior problems while daughter still in school. Daughter said 90% of day was spent reading as teacher dealt with kid. No-one learned anything.