Meanwhile, one gubernatorial candidate creates a buzz with her pithy, three-word platform. 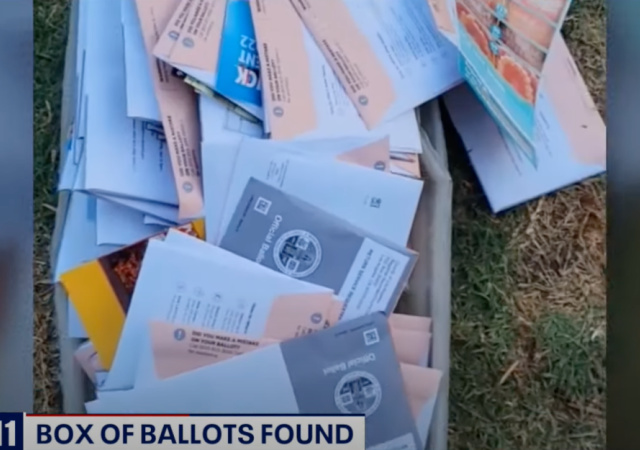 The Los Angeles County Registrar’s Office and the U.S. Postal Service are investigating over 100 unopened mail-in ballots found in a box on a sidewalk in East Hollywood over the weekend.

The ballots were found by Christina Repaci, who was walking her dog Saturday evening.

“I turned the corner and I just saw this box of envelopes, and it was a USPS box. I picked some envelopes up and I saw they were ballots,” said Repaci.

Repaci said she took them home for safekeeping while trying to figure out what to do next. She sent videos of the ballots to popular social media accounts to share the content and ask for guidance on next steps. Repaci said she called several politicians and the LA County Sheriff’s Department.

“I actually called the Sheriff’s Department. I couldn’t get through, so I emailed them,” she said. “I got an email back from a deputy basically in so many words saying it wasn’t their problem, and to contact the USPS.”

California is revving up for its primary election, slated for June 7th.  The initial investigation indicates that this is a case of simple theft as opposed to election tampering.

“Early signs indicate that this was an incident of mail theft and not a directed attempt at disrupting the election.”

Christina says she’s grateful an investigation is underway. And that 104 voters whose ballots were dumped miles from their destinations won’t miss out on their precious right.

“It’s a privilege to vote in any country,” she said. “As a woman I know that we didn’t have rights many years ago. I take that very seriously.”

The California Secretary of State says all registered voters should receive a ballot in the mail by the end of this week.

Given the amount of theft resulting from soft-on-crime policies, especially in the Los Angeles County area, mail theft is certainly a reasonable explanation.  However, this discovery does not instill any confidence in California election integrity.

Interestingly, over 20 candidates officially on the ballot are vying for a chance to be California governor in a challenge to Gavin Newsom. One of the most intriguing candidates listed in the Official Voter Information Guide and running as a write-in candidate is Mariana Dawson.

In a candidate voter guide published by the California Secretary of State, Dawson’s image is accompanied by a pithy three-word statement: “F all politicians.” Dawson is running without a party preference.

…Dawson’s website described herself as “a self-made woman of mixed heritage—half Creole, half Salvadorian—who has worked across a full spectrum of California jobs.”

“I have no political resume or affiliations,” she wrote. “I have lived in the city, and in a rural community. I am not a millionaire. I value success and successful people, but do not support corporate monopolies.
​
“I am one Californian ready to take a stand and work toward solutions that are doable and that prioritize harmony of life for everyday people in our state,” she added. “Winning means real help is coming. And losing will only make me fight harder for my economic existence, and my ability to stay in the state I love.”

Her platform touched on issues that extend across the entire political-ideological spectrum, including being pro-law enforcement, pro-self defense, pro-gun rights restoration and reinstating the death penalty.

She said she is against Critical Race Theory, wants to break up monopolies, and wants to “find a cure” for fentanyl addiction.

Her simple statement has garnered a great deal of interest.

Got my election book in the mail today & I don’t know about you guys, but I’m voting for Mariana Dawson pic.twitter.com/HIfWHxOrLk

I would hazard to guess no other candidate will generate nearly as much buzz!

So, at this point, I project another November in which a big, red wave rolls washes over every place but California.

I’m sure there’s some sort of innocent, benign explanation for this. Actually, no, there isn’t. Someone is already working on an election steal and they’re sloppy.

It doesn’t matter if it was for intention of election fraud. It shows that mail in balloting is unsecure and increases the possibility of fraud.

Everyone should go to the poll to vote on election day. No early voting. Absentee ballot only for a reason not for convenience alone.

People have fought and died for your right to vote. If you can not be troubled to drive or walk a few minutes to a polling place to cast your vote on election day, you don’t deserve their sacrifice and you shouldn’t vote.

Ima figuring CA mass-mail-without- request mail-in ballots don’t require any form of voter ID – that if you mail in one it by default is assumed valid. So there was nothing to prevent this dogwalker from filling this box of ballots out and voting 20x fraudulently. Do the mail-in ballots at least have unique ID numbers so it’s visible if a voter got his/her vote stollen when/if they try to vote? Even if they do the 50%+ of non voters means 50%+ of fraud votes will be invisible. As well if I was a crooked pol with the right connections how hard would it be to have an employee at the printer with the contract to print the forms print a few thousand blanks for a few thousand bucks?

All in all I have no confidence in vote integrity in any state that mass-mails mail-in ballots. You get to cheat without having the difficulty of actually having a warm body show up – so mass-mailings enable mass-fraud. But to vote fraudsters (and the Dem Party) I guess that’s a feature – not a bug.

If I may request something. Last night I had the experience of watching the documentary movie 2000 Mules. It carefully and precisely shows in detail HOW the 2020 election was stolen. Nothing has been done, which would not be that hard, to prevent a recurrence. It is available theatrically or online.

Small correction. It shows some of how it was done. It does not, however, deal with the midnight ballot drops, the shenanigans at the tabulation centers what with blocking windows and locking out observers, and the whole shutting down the counting in 6 states at once which had never been done before and violated the law in most of those states.

Now it seems like the only use for California ballots are good for – just like the NY Times and Washington Post – are picking up dog poop.

Besides: don’t ALL dog walkers eventually discover boxes of mail in ballots on the sidewalk?

Probably doesn’t matter anyway. There isn’t any Republican Party in California since they all declared each other RINOs and threw themselves out of the party.

In particular: Milquetoast McCarthy, who is seeking to be the next Boehner.

These ballots are awaiting a full airing by the Disinformation Governing Board.

The use of all mail-in ballots should be banned for all domestic U.S. voters and they should only be allowed for Americans and U.S. military personnel living/stationed abroad.

What about people who are homebound, or in hospital? Or people who will be away from home on election day? There has to be some way to accommodate them, but it needs to be a lot more secure than our current system.

I think in some countries they have a mobile polling station, complete with an election judge and poll watchers, going bed to bed in hospitals, so patients can vote in person. Of course in the USA, where there are thousands of precincts each with their own ballots, it would be impossible for such a station to carry around several copies each of all of them, but with modern technology that’s a solved problem. All the different ballots, from the whole state or even the whole country, can be uploaded on a secure server, and the election judge could input the patient’s name and address, determine that they are indeed registered to vote, and print the appropriate ballot for that address. Check the voter’s ID, let them fill the ballot in in privacy, then put it in an envelope to be securely sent to the voter’s district election board, and ink the voter’s finger.

The same thing could be done on military bases, but they would have to be allowed to vote early because they might be out on a mission on election day.

And the same thing could be done at all polling places in the country, so anyone who is anywhere in the USA on election day should be able to vote in person, with the appropriate ballot for their address. After checking their ID and inking their finger so they can only do it once. US consulates overseas can also have the same facility.

Leftists plan is a mailed ballot for every person on rolls, live, dead, moved to another state, illegals signed up on motor vehicle license. Flood the system and let the hacking cover the missing is my guess.