Dept. of Education Should Think Twice Before Attempting to Weaponize Title IX

Dept. of Education Should Think Twice Before Attempting to Weaponize Title IX

Biden adminstration about to propose new regulation reinstating the bad elements of the Obama policies that led to due process denial and campus kangaroo courts. 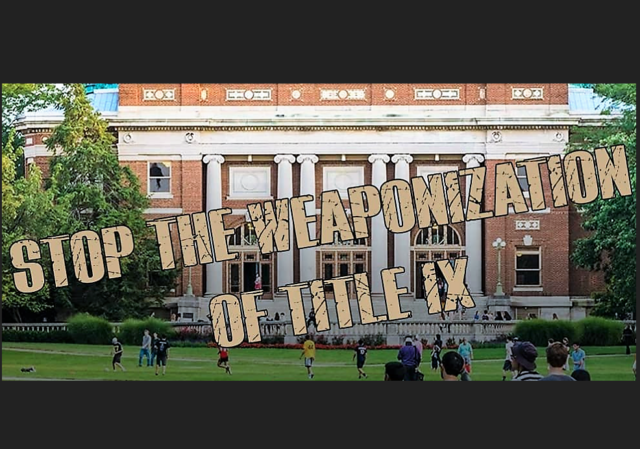 Title IX is the federal law that bans sex discrimination in schools. Unfortunately during the Obama Administration, Title IX became the pretext for the abrogation of free speech and campus due process, all in the name of curbing sexual harassment.

Orwellian “free speech” zones and speech codes — reminiscent of the thought control tactics used in totalitarian societies — became commonplace. And campus Kangaroo Courts dispensed with the presumption of innocence, impartial investigations, and cross-examination. No surprise, expelled students eventually filed over 700 lawsuits against their colleges, claiming a lack of due process.

To counter these endemic problems, the Trump Administration issued a new Title IX regulation in 2020, rooted firmly in the Constitution. But campus feminists were outraged, claiming that women would face greater barriers in seeking justice – and downplaying the fact that 40-50% of campus sexual assault allegations are later determined to be unfounded.

Seeking to curry favor with the female electorate, presidential candidate Joe Biden promised a “quick end” to the Trump-era policy. On March 8, 2021, Biden issued an Executive Order to rework the 2020 regulation, vowing the new policy would bring an end to “discrimination on the basis of sexual orientation or gender identity.”

During the ensuing months, concerns about campus free speech and due process became more pronounced. And two new hot-button issues — women’s sports and parental rights — began to dominate the headlines.

A recent Knight-Ipsos poll reveals that 84% of college students say free speech rights are extremely or very important. But a FIRE survey of 481 colleges reported only 12% received a “green-light” rating. A green-light score only means that the college did not have overt policies restricting open debate.

Due process is essential to assure that decisions of “innocence” or “guilt” are accurate and reliable. To date, over 170 cases have been decided against universities that failed to uphold due process.

This new definition would allow transgender athletes to compete in women’s sports, even though transgenders enjoy numerous physical advantages over biological females. This contradicts the whole purpose of Title IX, which is to assure fairness for all students regardless of sex.

A Gallup poll found 62% of Americans believe transgenders should be allowed to compete only with athletes of their birth sex. To date, 12 states have enacted laws that ban the athletic competition of transgenders against biological females.

If the proposed Title IX policy goes into effect, parents will have no say regarding the exposure of their own children to curricula on sexual orientation and gender identity. In addition, children could be gender “transitioned,” placed on hormonal treatment, and assigned a new name without parents’ knowledge or consent.

These four issues have become embedded into the national consciousness in the past year following reports of an Ohio professor who was disciplined because he refused to use a student’s preferred pronoun, as high-dollar settlements were announced for gross violations of due process, and as transgender athletes dominated a growing number of athletic events.

The tale of Yaeli Martinez is especially disturbing. Following bouts of depression, California LGBT workers claimed her mental health problems were caused by her “hetero-normative” status. Moved into foster care and placed on testosterone treatments, her depression spiraled out of control, compelling her to step in front of a speeding train. At the funeral home, her mom begged to see her daughter’s body for the last time. “The gentleman from the funeral home told me there’s nothing really that you can see or recognize,” the grieving mother later recounted.

Last month, the issue was catapulted into the November elections, as Ronna McDaniel, chair of the Republican National Committee, catalogued a series of encroachments of parental rights and proclaimed, “The days of ceding cultural issues to the Left are over. Democrats will feel it come November.”

Consistent with public opinion polls and the enactment of numerous state-level laws, 80 organizations have signaled their opposition to the upcoming Title IX regulation. Given these developments, the Department of Education would do well to abandon its plan to weaponize our nation’s schools.

Edward E. Bartlett is the president of SAVE, a national policy organization working to assure fairness and due process in schools.

It’s depressing to see something like Title IX that young women worked so hard for 50 years ago being sacrificed to make faux women happy. I guess they’re too worried about being able to kill their babies to notice other things slipping away. But then back in the early 70s women sacrificed the ERA on the altar of abortion.

“This contradicts the whole purpose of Title IX, which is to assure fairness for all students regardless of sex.”

Fair? Who said life was fair?
There’s supposed to be equality under the law and that’s it. That doesn’t equal ‘fair’.

As you could see very clearly Barry Goldwater in 1984 with the support of Ronald Raegan put cable companies under federal regulation in order to protect the ability get speech out in the public square even against the will of the corporate owners of the air waves.

Functionally it is exactly the same as if we put free speech regulations on social media (which I fully support).

By the way WE don’t believe in no government say over private enterprises (see for example Ron DeSantis and the many regulations he put into law in Florida).

Stop using that out of context cold war era line to misrepresent what conservatism actually is. The 20th century Republican Party would not recognize the “MUH GOVERNMENT BAAAD MUH CORPORATE GOOD BUILD YER OWN GOOGLE” lines of today.

I agree! I just missed being able to play on a girls’ basketball team in high school prior to Title IX…..and, now my granddaughter may also miss having the opportunity.

Feminism has mutated into fauxminism.

Why would they stop it?? They’re on a tear before the election. EVERYTHING is on the table, including treason, oppression, violence and martial law.

How can Title IX be weaponized when ‘woman’ cannot be defined? I am so confused….

Title IX is considered by that organ of State power to be primarily a tool to compel submission of individuals to the State. Of course it will be weaponized. In the end, that is why it was created.

Education doesn’t seem to be going well. Maybe zero out their budget.

Or declaw by block granting 99.99% of budget to the States. They can have .01% to collect data and publish reports on Student performance among districts and States. Let each State decide how to do spend the money if we can’t stop the spending.

Better yet, close it all down. Schools worked fine before the Dept of Ed.

So long as decisions about education are not made nationally by a largely unaccountable federal bureaucracy that overrides local and State mores and culture, which is the source of the problems, that’s fine.

Close it would be great but then that would deprive a Senate education committee chairman of his power, not to mention the ranking member who hopes to become chairman. Same thing over in the House. Ds and Rs guard their power with vigor.

Reflects some of my thinking on a lot of Fed agencies. I think a lot of them need to have their regulatory authority stripped from them and if not disbanded then perhaps have them refocused into research and advisory roles. Look closely at issues, write up reports and present them to Congress and or White House, but it’s up to Congress to pass the recommendations in those reports to law as part of a bill, or not, and the White House to either give it’s approval to said bill or veto it. Then the only way it becomes law is by Congressional override or those who want it passed will have to wait for a more friendly administration.

Yes indeed. Congress has standing committees of jurisdiction. These committees can review documentation, hear testimony and make recommendations for modifications to the HoR and the Senate. If our public servants in Congress find that too burdensome or time consuming they can begin to dismantle the programs, agencies and departments they claim they can’t effectively oversee.

It should be a crime to encourage little kids to think they can actually change their sex. Although they can change their appearance to look something like the other sex, in nearly all cases they:
1. Can never have children of their own.
2. Can never experience an orgasm.
3. Will be dependent on taking hormones all their life.

When I was a little kid, I was impressionable and made stupid decisions. I can imagine how many little kids would decide to try to change sex if a charismatic teacher made it seem like the cool thing to do. Studies show that at least 80% would later regret that decision, in most cases after they have been rendered sterile.

Can never experience an orgasm.
And if they’re too young to even comprehend “orgasm” then you probably shouldn’t even be talking to them about “transgenderism’.

the fact that 40-50% of campus sexual assault allegations are later determined to be unfounded.

And most of the rest are not determined to be founded, and are probably not, but it can’t be proven.

Attempting to weaponize?
Where have you been for the last 30 years?

This is why winning the presidency is important and no the Democrats do not worry about what we will do because instead of coming up with positive uses for the DOE we delude ourselves into thinking we will get 60 votes to disband it.