“managed to attract just 29,000 viewers in the advertiser-coveted 25-54 demographic” 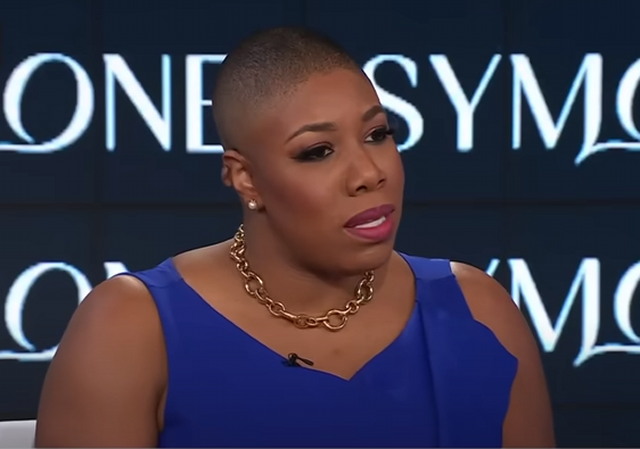 Symone Sanders, who worked for the Bernie Sanders 2016 campaign, before jumping to the Joe Biden campaign and ultimately the VP office of Kamala Harris, is now a host on MSNBC.

Her new show launched this past weekend, but not many people were watching.

Her first guest was First Lady Jill Biden, but that didn’t seem to help much.

Symone Sanders’ popularity is about as bad as the approval rating of her former boss.

The ex-Biden administration official who was most recently a top spokesperson for Vice President Kamala Harris tanked in her debut this past weekend on MSNBC, according to newly released Nielsen ratings.

For context, there are individual broadcasters on YouTube who get far better numbers than those.

Here’s a sample of what you missed.

Joseph Curl of the Daily Wire has more:

Before her new show debuted, Sanders, 32, said “I’m not here to be a spokesperson for the Biden administration. I had that job already,” according to The Hill.

“I’m going to be honest, and sometimes the honesty means that what I have to say is not what the administration would have to say. And that’s fine, because it’s my show,” she said.

Sanders’ program airs Saturday and Sunday at 4 p.m ET. “We’re going to do today’s headlines, but we’re going to go deeper. We’re going to get to the weeds,” said Sanders, who also has served as a CNN commentator.

“I’m a millennial, and the only reason, frankly, I was turning on the TV was because of the job that I worked,” she said. “When I wake up in the morning, I’m checking Twitter, I’m checking Instagram, I check my email, I check my text messages, and I would not turn on the TV … and then the first time I see a television that’s on is when I walk into my office.”

“So my show is going to reach people like me: young people who are engaged, who are paying attention, who care, but who may not be watching TV as regularly,” Sanders said.

Sanders had better start engaging with a higher volume of viewers or her show won’t last very long.

Will she end up playing the race card when the show is canceled?

There is absolutely no doubt she will.

Only her hairdresser knows for sure….

I feel dreadful. I now know of approximately 35 things I do not have. Among them is the valley fever that we suspected. At this point I just think it’s a virus that I need to write out. I get these periodic fever spikes Roy break out at the most unbelievable sweats. Eventually those subside. I had one earlier this evening which is now winding down. I just want this over with. Once it is, I’ve got three other things that we need to attend to to get me back on all four cylinders again. Thank you for asking; I appreciate it.

That really stinks. Hope you get through it soon, GG.

Have you tried vitamin supplements? They got me through Covid rather well. Here’s the place that recommended them and I bought them from:

I’ll tell you an amazing story: my grandmother had symptoms you had. No doctor could figure it out. Finally, she was seen by a doctor who had military experience in the tropic. His diagnosis: MALARIA!

I called the infectious disease doctor that’s on my case. I called his office this morning. He’s on rounds of the hospital but they have sent him a note. Time will tell.

Hope you feel better soon and that shortly, very shortly, you will get this mess behind you.

But at least you are home.. That is huge… Thanks for the update.

That has done wonders for my morale.

Well, there’s your problem. You cant haul that payload on four cylinders! 🙂

You haven’t seen the cylinders!

Wishing you all the best in your recovery.

Couldn’t help but notice you didn’t say “IF her show is cancelled”……..

You have a good eye!

Well, she fills the hour. And the screen.

When they reported that Biden was taking the Beast on his foreign trips, I was never quite sure what was meant.

“Symone says”? How cheesy is that!

“Symone says: flop on your face”

Are you sure it’s not Simon? Mike Obama’s brother?

True, but just another crazy woman, of any color. Besides, most crazy women nowadays are white women.

that picture is wrong. the picture posted is of Magic Johnsons kid, EJ

Interesting that she has claimed to have alopecia. Yet she has a full head of hair growing. Another lie from a lunatic.

Or, be one of the hens on The Spew.

I had no idea that Bernie has a daughter. She looks like she eats at the colonel’s.

Don’t look too long or you will damage your eyes.

Perhaps the reason for the poor viewer ship is we have a market already saturated with former d/prog officials turned talking heads to lecture us?

definitely the recipient of an ugly stick assault–the chain around the neck is a nice touch–well, either msnbc or motel 6 and a mop

Motel 6 has a lock on the Hispanic Services employee market. Better work ethic and outcomes. Unlike the D-Prog Affirmative Action group.

“I’m Tom Bodett for Motel 6, and we’ll leave the light on for you.”

The bald head seems like a form of self mutilation to me. And the symbology of it, in light of what the Apostle Paul worte in his letters, would seem to be a woman who refuses to be under authority and in particular honoring / respectful of her husband.

As in “honey, I’m gonna make myself ugly. Hope you’re OK with that. You better be OK with that.” It’s especially warped in the sense that a husband has a vested interest in the health and wealfare of his wife, and vice versa. And where beauty is a factor in physical attraction, to make oneself ugo on purpose is selfish and inconsiderate of one’s spouse.

The woman is Fugly beyond reason.

Her voice is way too shrill. Got a migraine just listening just listening to that short clip. Jen Psaki will fit in well with this crowd and I hope she has the same success as Symone. With a couple more ex-Biden hires, MSNBC will become ANOTHER shadow government.