“Republicans look like they remain in the driver’s seat for November because voters don’t trust Democrats on the all-important issue of the economy.” 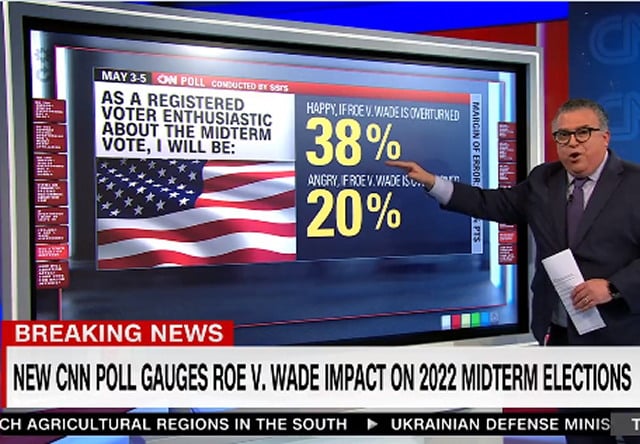 Democrats and the media are quite excited about the SCOTUS leak on Roe vs. Wade because they think it’s a chance to flip the script on the 2022 midterm elections, but it doesn’t look like that’s the case, according to new polling from CNN.

A poll they took after the leak suggested that the landscape of the midterms hasn’t changed. In fact, Republicans went up a little bit.

The national political environment has favored Republicans since last fall. And it has only gotten worse for Democrats in the months since as inflation has skyrocketed and President Joe Biden’s approval rating has dropped.

The recent leak of a draft US Supreme Court opinion that would overturn Roe v. Wade seemed to give Democrats a winning issue to rally base and swing voters in the midterm elections. After all, most Americans support the landmark 1973 high court decision that legalized abortion nationwide.

Our new CNN poll conducted by SSRS, however, shows that such hopes are likely unfounded. Republicans look like they remain in the driver’s seat for November because voters don’t trust Democrats on the all-important issue of the economy.

The May 3-5 CNN survey, conducted after the draft opinion became public, shows Republicans with a 49% to 42% advantage on the generic congressional ballot. If that 7-point lead held through the election, it would be as large a win for the GOP in the national House vote as it was in 2010 — when Republicans regained the House majority and ended up with 242 seats out of 435.

More to the point, it’s the widest edge for Republicans on the generic ballot in a CNN poll this entire cycle.

Stay with this video until the end. The people who want to overturn Roe are the most enthusiastic about voting in the midterms:

Americans remain broadly opposed to overturning the Roe v. Wade decision that legalized abortion nationwide, according to a new CNN poll conducted by SSRS, following the leak of a draft Supreme Court opinion that would strike down the landmark ruling. CNN's @davidchalian reports. pic.twitter.com/IwZDLyoyhM

CNN Poll: "As a Registered Voter Enthusiastic about the Midterm vote, will you be Happy or Angry if Roe v Wade is overturned"?

Narrative buster: In new CNN poll, taken *after* SCOTUS leak, GOP leads on generic ballot by 7 points & among the most enthusiastic voters, nearly twice as many say they’d be happy about overturning Roe vs. angry about it: https://t.co/CdaIWCagVw pic.twitter.com/h1X95H6xgh

Again, it’s all about the economy:

Behavior like this is also not going to help Democrats:

The energy is markedly more negative outside Kavanaugh’s house. The anger has become much more palpable than outside any other justices’ house. pic.twitter.com/zY2OY34hcA

The November elections will come down to turnout, but history favors Republicans on this.

The Dems have tried to gin up support by saying if Roe is overturned, then SCOTUS will overturn gay marriage, birth control, etc. But that is totally false, and the draft decision says that it will not apply to any of these areas other than abortion.

Alito’s draft does nothing of the sort. What he does is look to the text of the Constitution and finds that is silent on the issue of abortion. Then he takes the scalpel to Blackmun’s make-up reasoning/justifications.

In the end he and the others joining him conclude that the silence of the Constitution on the subject means the subject is outside the jurisdcition of fedgov.

Wrong on gay marriage. Ask that baker in Colorado if his rights were not violated because he didn’t want to celebrate some gay man’s “marriage”.

Dems just have a problem with states rights….that means people can exist with differences of opinion and can vote with their feet if they choose.

Children conceived through surrogacy or IVF are victims, because they are denied their birthrights to live as their DNA dictates, e.g., as heterosexuals.

We allow children to be BOUGHT so homosexuals can “have” children. They are chattel to the wannabe homosexual parents, and SCOTUS approved this by shoehorning homosexuals into marriage.

We all know, and don’t have to be lawyers (though I am) to know that marriage confers a bevy of rights that thread through all of life. The decision approving the fake concept of “gay” marriage fundamentally altered them all without any consideration at all about those too helpless to object.

SCOTUS is full of flotsam and jetsam, and we all know it, except the “justices” who fancy themselves our masters to dictate to us how to live. Arrogant bastards.

I say, let’s make those pro-gay marriage, forced to live, involuntarily, with a “gay” “couple.” See how they like it… And if they don’t, tough — it was decided for them, because we’ve turned them into chattel, just like the babies they have sentenced to this horrible dysfunctional awful life.

How can a right to marriage be a “privacy” issue. Marriage is by definition a public act formalizing and acknowledging private things.

This is not about takin away abortion rights, but about returning that right to the voters of a state.

Even if the leak and RvW repeal was in play, most voters approve the repeal. What the voters are basing that judgment on is that RvW was supposed to legalize abortion under certain conditions and states have ignore those conditions. That explains why the polls are showing a gain for Republicans.

The abortionists have had 50 years to codify abortion low via Congress but that didn’t. Now SCOTUS has ruled that it is not a constitutional issue but a states issue. These is no constitutional right to abortion. Its legality will be up to the individual states. No complicated. The people will vote state by state. That’s the way it is supposed to work in this country.

Still the other shoe to drop is the actual ruling, will it be as the leak suggests or has the purpose of the leak worked and the verdict is turned?

Agreed. And if the intimidation worked and RvW is upheld, then there is no branch of the government left that even pretends to uphold the law and Constitution. Which means that the Social Contract and the Political Contract are void. It is untidy establishing new ones.

Abortion is not the issue it was 20 years ago. Quality sonograms have helped the ‘hearts and minds part of this issue.

Lets assume the best; that the Alito draft is the ruling (5-4, better 6-3). Hearings in the various states in the coming years, featuring all these high-quality ultrasounds, will makes lots and lots uncomfortable as they see the truth of developing life. In many cases many will be seeing these windows to the womb for the first time since the MSM has done its best to keep these things out of public view since 1973. They have known all too much the power of these images have on the human heart.

During these hearings those who would kill regardless of the evidence will be revealed.

A lot of people don’t know how detailed ultrasound images can be. I knew I was having a daughter, not through the lack of seeing male anatomy, but by seeing female anatomy. It opens people’s eyes when they see it is not “a clump of cells” but an identifiable baby pretty early.

I have read that they specifically didn’t buy newer sonogram equipment at Planned Parenthood clinics because of this.

Science and technology will ultimately destroy support for abortion.

Eventually it will be possible to remove a baby from its mother’s womb and gestate it in a tank, or implant it into another woman. At that point there will be no possible justification for abortion.

If “Americans are broadly opposed to overturning Roe v Wade” as they suggest, then surely these abortion supporters wouldn’t mind letting We the People and/or our elected representatives decide, right?

I mean if there is such “broad support” for “pro choice” issues, that’d be reflected at the ballot box, right?

If the issue were to revert back to the states and there was “broad support” for killing babies in the womb, then they have nothing to fear even if Roe v Wade were overturned…right?

Or…perhaps they know that public support for abortion is in the minority, and they’d actually lose if it were put to the voters….

The problem abortion crowd has relied on abortion being a “right” in order to limit the debate. Bring up the question of morality and their response has always been “its a right” and they used the same answer when asked about the medical necessity for an abortion. That is because abortion is all but impossible to defend on moral or medical grounds for 99% of cases.

Slavery too was defended on the “it’s a right” basis. Ultimately it was defeated because of its immorality.

Don’t forget the other argument that always accompanied it:
“the actual ultimate victim isn’t really a person.”
The more things change…

Democrats are famous for defining disfavored persons as unpersons.

And then, in the ultimate irony, they call their political opponents Nazis.

Okay, so the leak won’t change the election—on to plan B. If they hurry and plant the ballots now they will be ready to harvest by November.

I think they’re on Plan H by now.

Don’t fall for this “poor me, we’re doomed” crap. They cheated in 2020 and they’ll cheat again this time unless we watch every dadblamed move they make, and verify it twice.

Marxocrats have proven REPEATEDLY they are enemies of our Constitution, will lie, cheat, and steal to achieve ANY goal, and simply cannot be trusted.

To approach them any differently is suicide. Our ‘real’ republicans need only “reach across the aisle” swinging 2×4’s and pipe wrenches…that is ALL that the Marxocrats deserve.

Apparently they have sent their most toxic and volatile to Kavanaugh’s crib,

Hey hey you dirty libs, stay away from SCOTUS’ Cribs.