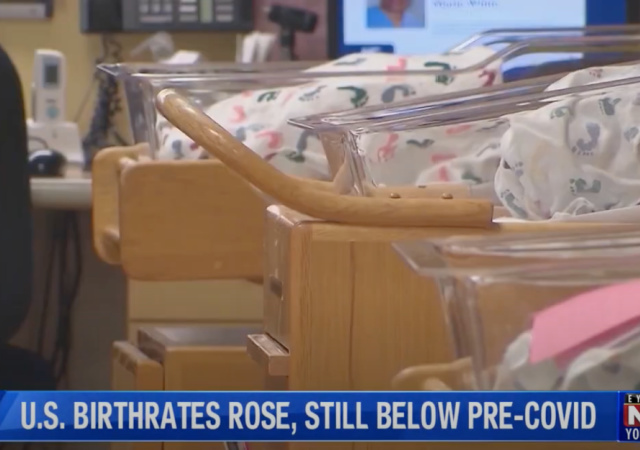 People had fun during the lockdowns. 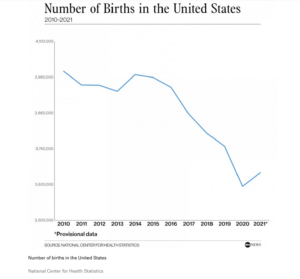 However, the total fertility rate — the number of births a hypothetical group of 1,000 people would have over their lifetimes — was 1,663.5 births per 1,000 women.

This is still below what experts refer to as replacement level, the level a population needs to replace itself, which is 2,100 births per 1,000 women.

The team looked at birth rates among women aged 25 and older increased while decreasing for those aged 24 and younger.

“That sort of suggests [that] when we saw the decline in births from 2019 to 2020, probably a lot of births were postponed,” Hamilton said. “People were waiting to see what happened [with the pandemic] and rates rose in older women as they may have proceeded to have that child.”

Women aged 35 to 44 had the most births. This fits the trend that women want to wait to have children.

Teenage births have been continuously falling since 2007 by an average of about 7% through last year.

“When you look at it across time, that’s a 77% decline since 1991 and 65% decline since 2017. That’s astonishing,” Hamilton said. “That’s certainly good news. And it will be interesting to see when we go into next year if it continues on.” 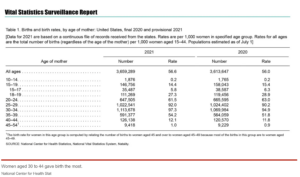 Premature babies are at a greater risk for problems with feeding, breathing, vision and hearing, as well as behavioral issues.

“Whenever you see an increase in preterm births, that’s concerning,” Joyce Martin, from the Division of Vital Statistics and co-author of the report, told ABC News. “And we saw an increase in early-term babies, and they’re at greater risk than later-term babies of not surviving the first year of life.”

We don’t need to reproduce at replacement rates, they are importing our replacements.

But the Latinos reproduce 2-3 times the average American

What is the breakdown by ideological alignment?

I would guess that Conservatives are at or above replacement rate, while Liberals are well below it. That is not a bad way for things to be.

The fact that 2nd and 3rd generation hispanics tend to be more conservative must be grating on the far left.

The teenage foreign nationals and anchor babies are having babies, which means they have two generations of children for our one.

I loath our self-appointed ruling class.

Diversity [dogma] (e.g. race) does not matter? One step forward.

2020 was still a pretty big COVID style year and there was a lot of free govt money to stay home and a lot of remote work and distancing in businesses that would rather not be such.

The 9 months it takes to have a baby could have some spillover from 2020 if the births were high in the early quarter. I’d be interested in the data throughout the year.

I’d rather have seen an increase in teen pregnancies.

On second glance, that looks like a textbook dead cat bounce