Another Democratic mayor of a border town lashed out at Biden: “You know we are totally being ignored here in the border.” 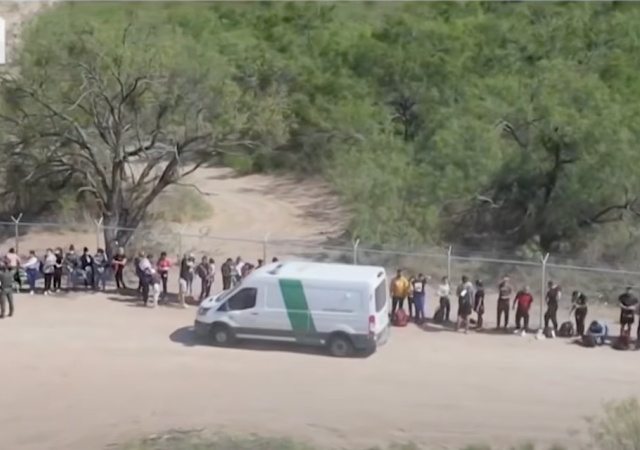 “You know, pretty much it tells us that the borders are being ignored. You know, it is bad because we are U.S. citizens also, we live in the border. You know, a high percentage of the population is Hispanic. So unfortunately that sends a huge message for us. You know we are totally being ignored here in the border and that’s not you know, what the U.S. should be about.”

These are exactly who the pedpohile-in-chief wants … his kind of people.

Not to worry. More came through than were sent back

You’re comment is not sarcasm – it’s true. Our schools and a lot of our government is infested with pedophiles, and they want their numbers to grow.

I didn’t mean it as sarcasm. Biden is a pedophile and leftists support him for it.

Then call your governor.

The US constitution delegates NO power to the federal government to administer immigration. It delegates power for naturalization (citizenship), but no more.

A state’s borders — including its international borders — are fully under control of the state. A state should be able to allow or prevent traffic across its international borders at will, even more so than is domestic borders, which are subject to federal strictures. (Though that has never stopped states like California from establishing “fruit nazi” checkpoints on their domestic borders.)

There are several agencies under federal jurisdiction that make your statement not entirely correct.

When the state’s borders are also national borders they are also under federal control.

Show me where the constitution says that.

There are a crapload of unconstitutional federal agencies. All that proves is that we didn’t push back hard enough.

Seriously, show me where the constitution says that the federal government has sole jurisdiction — or, in fact, any jurisdiction at all — over immigration.

It most certainly has the constitutional power to resist invasion, and if you don’t realize that it’s what we’re facing down here, you don’t know WTF you’re talking about.

It has two relevant duties with response to invasion:

To provide for calling forth the Militia to execute the Laws of the Union, suppress Insurrections and repel Invasions;

protect each of them [“every State in this Union”] against Invasion

Note this well. It isn’t the “country” being invaded, it is a state being invaded. The feds have the duty (not the “exclusive duty” to repel the invasion of any state — not just against foreigners, but against other states. States are sovereign — they have constitutions describing their borders by metes and bounds. The United States has no such thing.

Neither of those constitutional clauses are exclusive powers, as a state is always free to call forth its own militia to repel its own invasions. The only thing the fed can do that the states can’t (“exclusively”) is to muster the militia of other states in defense of the invasion of some given state.

Note that the constitution gives the feds only two responsibilities in this regard… and the feds are deliberately doing neither of them.

An effort by the Border Patrol that is welcome, and performance praised, by all People of America, neighbors, and others with common cause. Now for emigration reform to mitigate progress and collateral damage at both ends of the bridge and throughout.

If they really like incest and sex with miners, they should be sent to West Virginia.

That was rather coaled of you.

No doubt they were coming to try and register ‘Democrat’.