Biden and Harris Reportedly Divided Over Dealing With Student Debt

Biden and Harris Reportedly Divided Over Dealing With Student Debt 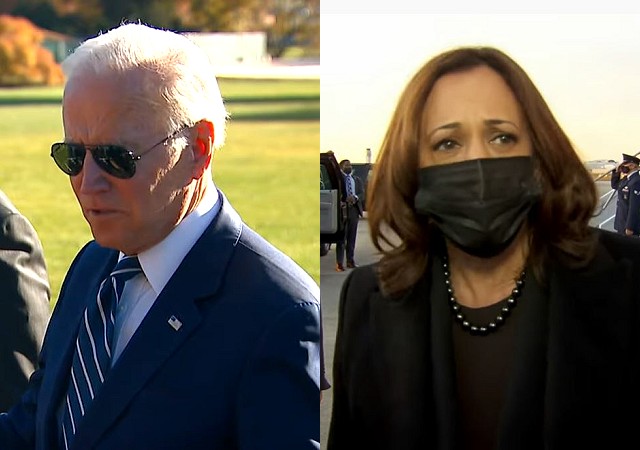 Now that Biden is sinking like a stone in polls, even with young voters, he is talking about canceling more student debt.

But there is apparently a conflict between Biden and his vice president on this topic.

Trouble in paradise? Say it ain’t so.

Early in April, Vice President KAMALA HARRIS’ office began collaborating with the White House on a social media video to promote the administration’s extension of its pause on federal student loan payments.

Harris’ office then decided against it, according to two White House officials familiar with the matter.

Ultimately, President JOE BIDEN released his own video and Harris issued a statement about the policy. It was a shift from December — the last time the administration extended the pause — when Harris and Biden both filmed social media videos about the extension that came down then and worked with advocates of student debt cancellation.

Privately, Harris has advocated for additional loan forgiveness. One White House source said her office seemed initially eager to participate in the administration’s public dialogue around student loans. But conscious of progressives pushing Biden to unilaterally cancel tens of thousands of dollars in student debt and that Biden is resisting such lobbying, the vice president has been increasingly wary of becoming part of the public face of the administration’s response.

Critics on Twitter are pointing out that Harris clearly has her own ambitions:

A Vice President who is unwilling to enthusiastically back *any* policy decision by the President should resign.

There are a lot of unprincipled politicians in DC, but it's almost funny extent to which the only thing Harris cares about is advancing her political career. Every policy she adopts and decision she makes is guided almost exclusively by that. https://t.co/OArldzgtx3

What neither Biden nor Harris seems to understand is the anger this stirs in many people.

‘A slap in the face’: Some Americans are mad over potential student loan forgiveness

As the president weighs broad student loan forgiveness, some Americans expressing frustration over a policy they see as unfair.

“While some may view this debt forgiveness as a slap in the face to people who were responsible and paid off their student loans, this is a bigger slap in the face to those Americans who never went to college,” Will Bach, a financial advisor based in Ohio, told Yahoo Finance.

Research has shown that a college degree generally boosts an individual’s earnings over their lifetime. And given that any broad-based forgiveness would cost tens of billions of dollars, all taxpayers — not just by those who have a college degree — would be contributing to the cost of cancellation.

“How can we honestly ask people who did not go to college to subsidize the lives of those who did decide to go to college?” Bach added. “To my knowledge, everyone with student loans voluntarily took them. Every instance of a student loan was a voluntary choice that person made.”

Biden’s mistake is listening to the Bernie/Warren wing of his party. They are pushing hard for this.

I released a new expert analysis on the huge benefits of student debt cancellation. The more President Biden cancels, the more it will close the racial wealth gap & the brighter the economic futures of Americans will be. @POTUS, it's the right thing.https://t.co/5XNyETDN9U

Near the White House, Senator Bernie Sanders at a protest about student debt.

Sanders says President Biden needs to “do the right thing. Cancel all student debt in this country.” pic.twitter.com/O2OK3g0Kmr

Harris: “It’s not my money and I’m just hoping to crawl back to Congress”

Whoever is in charge: “You’re not in charge and inflation will kill more votes than student forgiveness buys.”

Biden: “I’m for abortion of others.”

Harris: “I’m for abortion of others, too. In fact, I hoping you get aborted so I can move up.”

This is a teachable moment for the DNC and educational institutions that mandated billions of dollars in state of the art military… trillions of dollars in unbacked ‘C’redit emissions that is a first-order forcing of catastrophic anthropogenic climate… progressive inflation. They should consume the debt, swallow hard, and keep it down until digested with their own capital.

What neither Biden nor Harris seems to understand is the anger this stirs in many people.

No, I think she does understand. That is why she doesn’t want to be tied to it, not the ridiculous “it doesn’t go far enough”. Exactly how she avoids being tied to anything Biden does is another question. I’m not sure even our Democrat propaganda masters can save her from that.

Biden’s dementia is an apt reflection of a dying country. Like Biden, this once mighty nation is fading away fast. It’s sad to see it go, but nothing is permanent.

I wonder does anyone think things through ?
Does Congress have to send the President a bill for this ? and

What happens to the High School kids coming into college after the smoke clears? we end up in the same place eventually…