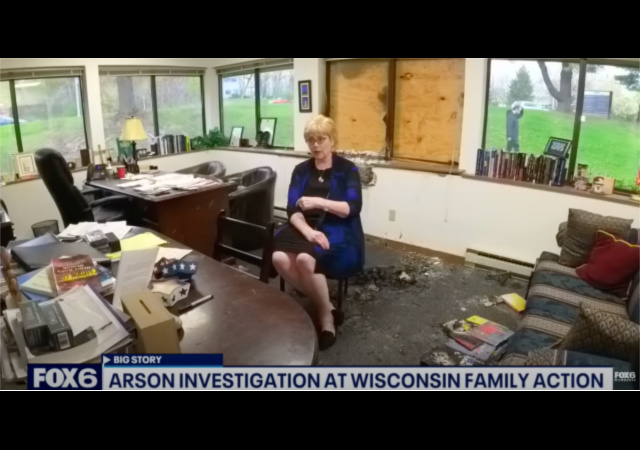 Our devout Catholic President Joe Biden condemned those who protested outside the homes of Justices Kavanaugh and Roberts and those who threw Molotov cocktails at a pro-life center in Madison, WI.

The pro-infanticide crowd has gone crazy since someone leaked a draft of Justice Samuel Alito’s opinion overturning Roe v. Wade. The administration refused to call them off during Friday’s press conference.

It’s also precious when the media call us “anti-abortion” and the other side “pro-choice.”

But I haven’t read anything from Biden about the protests and vandalism at Catholic churches. From The Hill:

“President Biden strongly condemns this attack and political violence of any stripe. The President has made clear throughout his time in public life that Americans have the fundamental right to express themselves under the Constitution, whatever their point of view,” a White House official told The Hill.

“But that expression must be peaceful and free of violence, vandalism, or attempts to intimidate,” the office added.

Psaki tweeted out a statement. The left went scorch earth on her.

.@POTUS strongly believes in the Constitutional right to protest. But that should never include violence, threats, or vandalism. Judges perform an incredibly important function in our society, and they must be able to do their jobs without concern for their personal safety.

Everything comes back to the bipartisan white power structure asserting its own monopoly over violence. We must accept the premise there is a proper, civilized way to engage in mass violence & that is solely thru institutions established & controlled by the ruling white elite 1/ https://t.co/xALVEELiyy

Abortion providers perform an incredibly important function in our society, and they must be able to do their jobs without concern for their personal safety too. https://t.co/lLzDcdsXSM

Biden never mentioned the Catholic churches vandalized since the leak. Churchgoers over the weekend, mainly Saturday, faced screaming fanatics as they tried to attend Mass. How about the radical group telling us to stuff ourselves with our Rosaries and threatening to burn the Eucharist?

We’re proud to see members of our Catholic Caucus @CatholicNYYRC standing up for their beliefs and for the fundamental rights of all unborn Americans.

Men sitting in the church’s rear pews were asked to pray outside to ensure that the leftist horde would not overrun the building https://t.co/EQ5FUUm1c2

Someone vandalized the Wisconsin Family Action’s Madison office. They threw Molotov cocktails into the office and littered the walls with graffiti.

But that is not the only office vandalized. A man posted a picture of a clinic his wife works at in Denton, TX. The clinic is an emergency pregnancy clinic that helps mothers during and after pregnancy.

My wife works at a pregnancy center in Denton, TX. It was vandalized last night. Please pray for the people who work there. They help women and their babies with anything from preborn to 3 years of age. They are beautiful people and don’t deserve this hate. #ProLife #Catholic pic.twitter.com/63BLvNDMkQ

In the future, when a time machine has been invented, they can take all the people who believe in abortion and send them back to their mother’s womb to be aborted.

These lefty activists are a very angry, soulless, lost group of fools. That said I do hope one of them gets caught in the act pulling this nonsense and gets beaten very very badly.

Give em the “Some sorry Leftist bum rushed Dave Chapelle and missed, then immediately got caught by his security guards, got curb stomped and had his ripped put of should so bad it was inverted” treatment eh? I’m all for it.

when you come to a person’s home in anger, you pose an implied threat to their family and loved ones–when you show up with molotovs, etc there’s no longer any “implied” threat to consider–you’re taking your own life in your hands–if the progs/leftists/whatever want to play for those sort of stakes, then they’d best be prepared to die for it as that’s likely going to be the outcome

They should identify which prosecutor promised the mob they wouldn’t be prosecuted for violating federal law and make an example of that scumbag lawyer.

These people are nucking futz.

I’m still pro-abortion. I’m not pro-choice. I do however accept that others have bodily autonomy and refuse to impose my wishes on them.

If only the pro and anti-choice crowds could be as mature.

Well, I was just responding to a specific comment in the article, but since you went there:

Pro-choice is not semantics. It’s accurate, and for many ‘pro choice’ people far more accurate than ‘pro abortion’. They’re not advocating abortion, they’re advocating having the choice.

Something anti-abortionists reject. They don’t want people to have the choice, so they’re anti-choice. No semantic games necessary – everything means exactly what it appears to mean.

“Pro-choice is not semantics. It’s accurate, and for many ‘pro choice’ people far more accurate than ‘pro abortion’. They’re not advocating abortion, they’re advocating having the choice.”

The choice of …? Please define.

I reject your characterisation of abortion as murder. I also refuse to prosecute women who miscarry for manslaughter.

I assure you nobody gives a shit what you think about that topic either, you pedantic, attention-whoring jackass.

“They’re not advocating abortion, they’re advocating having the choice.”

“Whether to carry to term or not.
Whether to have a baby or not.”

You mean, “Whether to have an abortion, or not.”

Waiting for law and order to be reinstated. Hopefully I won’t have to wait too long for equal justice under the law.

AIUI there is a federal law against picketing the home of a Supreme Court justice. Is anyone doing anything to enforce this law?

Finally, someone pointing out that this action is illegal. Judge Jeanine Pirro read from the statute on The Five today – up to a year in prison. Brandon and Garland are AWOL, as usual.

No criminal law can be applied against any Leftist engaged in an illegal act against anyone the Left hates. That, functionally, is the new “shadow of the penumbra” of modern times.

What? It became too obvious that the lunatic animals that support infanticide really have no place in a civilized society?