“The so-called conscience rule, unveiled in 2018 and finalized in 2019, was blocked by federal courts after dozens of states, cities and advocacy groups sued, and has never been implemented.” 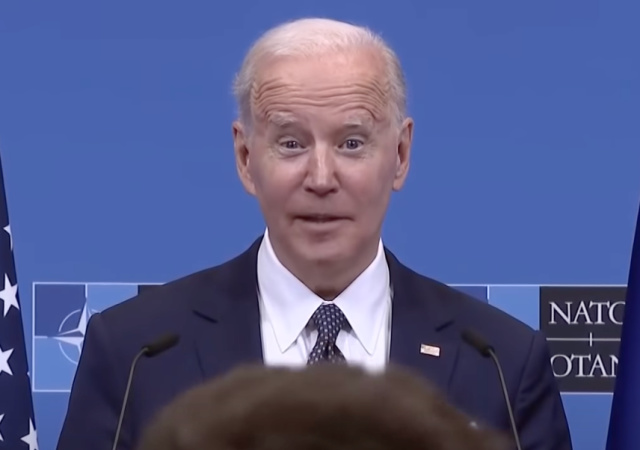 The midterms are drawing near, and Joe “I’m the Democratic Party” Biden’s poll numbers continue to crash.  Desperate Democrat incumbents are fleeing from his policies on the campaign trail (yet voting for them in Congress), and the administration is desperate to do something, anything to appeal to its radical left base.

Their latest move is to revoke a Trump-era policy from 2018-19 that never even took effect.  The “conscience” rule was intended to allow health care providers to not take part in abortions and other such “treatments” that violated their own conscience.  The pushback was fierce, and the rule was never implemented.  But that doesn’t stop the political theatrics of “revoking” it.

The Biden administration is preparing to scrap a Trump-era rule that allows medical workers to refuse to provide services that conflict with their religious or moral beliefs, three people familiar with the deliberations told POLITICO.

A spokesperson for the Department of Health and Human Services confirmed that the policy change is underway, saying: “HHS has made clear through the unified regulatory agenda that we are in the rulemaking process.”

. . . . The so-called conscience rule, unveiled in 2018 and finalized in 2019, was blocked by federal courts after dozens of states, cities and advocacy groups sued, and has never been implemented.

Had it gone forward, it would have allowed doctors, nurses, medical students, pharmacists and other health workers to refuse to provide abortions, contraception, gender affirming care, HIV and STD services, vasectomies or any procedure to which they object.

Rescinding the rule is seen by progressive advocates as a key part of dismantling the Trump administration’s legacy on reproductive rights, which Democrats promised to do once they took control of Washington. Last year, Biden moved to undo anti-abortion restrictions on the Title X family planning program and foreign aid, and many groups have pushed for the “conscience” rule to be next.

. . . . Many progressive groups that have called for the rule change say they’re reserving judgment until they see whether the Biden administration will completely undo the Trump administration rule or leave some aspects in place.

“We look forward to seeing the proposed rule’s text to ensure that the federal government safeguards patients’ need for high-quality health care,” said Audrey Sandusky, the spokesperson for the National Family Planning and Reproductive Health Association. Still, she added, “This action will go a long way toward strengthening patient access to high-quality health care and protecting the integrity of key HHS programs, including the Title X family planning program.”

The goal, as they clearly state, is to erase President Trump and his legacy. In this case, though, it seems a bit more like politics as usual than anything substantive. Revoking a rule that was never implemented is going to make these leftwing groups happy and won’t upset incumbent Democrats—or anyone else—so it probably feels like a “win” to Team Biden.

“I am so tired of waiting.

for the world to become good

and beautiful and kind?

Let us take a knife

and cut the world in two—

and see what worms are eating

Strange. Our community college has a big nursing program, and they’ve always allowed Jehovah’s Witnesses to avoid taking part in blood donations or transfusions. It seems nobody objects to respecting someone’s religious beliefs until the topic of abortion comes up.

The concept of freedom of conscience is very dangerous to totalitarian true believers in big govt and big brother. I wonder what will happen when these same folks are, at some future point, confronted with the force of the State to compel their own actions. Perhaps the only way these people will learn why retaining freedom of conscience is important is to create an object lesson. ‘Some men you just can’t reach’ ….unless you hit them with a 2×4.

The Biden people would first need to find some ‘virtue’ to signal with.

They’d need some stolen virtue, to go with their stolen valor.

Not going to move the needle appealing to the far left. You already have them even if Biden is a corpse.

If they really want to get votes, then they need to pretend to be centrist for a bit. Biden hasn’t pretended to be centrist, especially not fiscally, since before the election.

I wonder if rescinding this “conscience rule” also applies to the progressive idea of medical education and care based on race, identity and equity.

Or, to medical people whose ‘conscience’ tells them to harm patients based on their identity, race, religion, ideology or who cope by giggling.

Personally, I wouldn’t want angel of death types to be forced to treat me.

The Dumb-o-crats are narcissistic children, to the core. Never missing a chance to grandstand and strut about, patting themselves on the back for their alleged “enlightenment.”

Does anyone really want a doctor performing a procedure on them that the doctor was not comfortable he could do?

My biggest question is why exactly was this EO never implemented? While this is all talk from Biden, the same EO should not have been all talk from our side.

“The so-called conscience rule, unveiled in 2018 and finalized in 2019, was blocked by federal courts after dozens of states, cities and advocacy groups sued, and has never been implemented.”

I don’t understand why healthcare workers can’t just say, “Sorry, that’s not a service I provide.” My auto mechanic doesn’t work on transmissions and doesn’t do alignments. The way to not baking cakes for gay weddings is to not bake wedding cakes for anyone. If you don’t provide abortions in a discriminatory way (that is, providing abortions to some, but not others), there should be no problem to just not providing them to anyone.