Russian commander: “One of the tasks of the Russian army is to establish full control over the Donbas and southern Ukraine.” 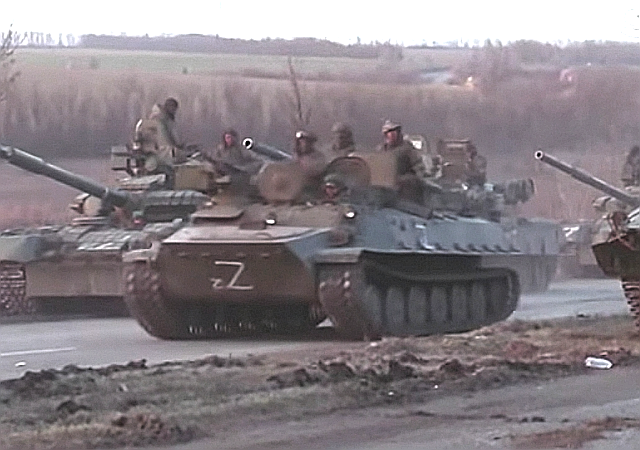 After nearly two months of fighting, Moscow appears to be getting close to capturing its first big Ukrainian city as Russian forces advance on the final pockets of resistance in the port city of Mariupol.

“The Azovstal steel and ironworks is the last stand for Ukrainian troops inside the besieged city of Mariupol, which is now almost entirely occupied by Russian forces,” UK’s SkyNews reported Saturday. “Ukraine’s presidential adviser has now said Russian forces are trying to conduct operations to storm the Azovstal plant and have resumed airstrikes,” the broadcaster added.

Ukrainian authorities are trying to evacuate the last remaining civilians from the Azovstal industrial area. “Up to 1,000 civilians have taken refuge in the warren-like network of service tunnels and utility passages that lie beneath the plant,” the British daily Telegraph reported.

The fall of Mariupol will create a secure land corridor between the Russian-controlled parts of eastern Ukraine and the Black Sea peninsula of Crimea, which Russia annexed in 2014.

Russian forces also seek to capture the entire southern coast of Ukraine, cutting off the country’s access to the sea, and creating another corridor connecting Russia to Transnistria, a pro-Moscow breakaway region in the eastern European country of Moldova, Russian military sources say.

“Russia is aiming to take full control of southern Ukraine as well as the eastern Donbas region,” the BBC reported Saturday, quoting a senior Russian general.

Hopes for a weekend truce in Ukraine to celebrate the Orthodox Easter faded with talks between Moscow and Kyiv stalled as Russia said it aimed to take full control over the east and south of its neighbour.

The war enters its third month on Sunday but a senior Russian military officer said “the second phase of the special operation” — as Moscow terms its invasion of Ukraine — had just begun.

“One of the tasks of the Russian army is to establish full control over the Donbas and southern Ukraine,” Major General Rustam Minnekaev said on Friday.

Russian forces, which withdrew from around Kyiv and the north of Ukraine after being frustrated in their attempts to take over the capital, already occupy much of the eastern Donbas region and the south.

Minnekaev said their focus was now to “provide a land corridor to Crimea,” which Russia annexed in 2014, and towards a breakaway pro-Russian region of Moldova, Transnistria, where the general claimed Russian-speaking people were “being oppressed”. (…)

The Kremlin has claimed the “liberation” of Mariupol, which is pivotal to its war plans nearly two months after President Vladimir Putin ordered the shock invasion of Russia’s Western-leaning neighbour.

The Russian military is training its sight on the southern port city of Odesa. On Saturday, several Russian missiles landed on the city. The missiles barrage hit a logistics terminal and residential blocks, news reports say. According to Ukrainian government sources, five civilians were killed and 18 injured in the strike.

The aim of the missile strike was to “destroy a logistics terminal in Odesa where a large number of weapons supplied by the United States and European nations were being stored, the [Russia] defence ministry said,” Reuters reported. The attack comes weeks after Russia declared U.S. and European military shipments to Ukraine as legitimate military targets.

Odesa is key to Western military supplies going to the besieged country. The port city is also believed to be the staging ground for the missile strike that sank Russia’s Black Sea flagship “Moskva” on April 14. The sinking of the Soviet-era missile cruiser angered the Kremlin, which responded by hitting Ukrainian capital Kyiv with missiles and airstrike.

The Russian invasion has driven millions of Ukrainians from their homes, the United Nations says. According to UN’s estimates, more than five million Ukrainians have been displace, with close to three million seeking refuge in neighboring Poland.

5,163,686 refugees have been displaced by Russia’s invasion of Ukraine. By far the largest number, 2,884,764, have crossed into neighboring Poland.

Of those who fled, women and children account for 90%. Men between the age of 18 and 60 are unable to leave as they are needed to help with the military effort to repel Russia’s invasion.

Unlike the migrant wave of 2015, when millions of men from North Africa and the Middle East swarmed Europe, the overwhelming number of refugees from Ukraine are women and children.

Can someone explain to me how Russia was allowed to annex the Crimea in 2015 with absolutely no lasting penalty from the UN or any other “watchdog”?

What sort of penalties do you believe that the UN or other watchdog org inherently possess and who would enforce them?

Tibet, perhaps. Kosovo, maybe. That said, they did not “annex” it. It was already legally their possession, and while Kiev was celebrating the Slavic Spring in the catastrophic world war Obama Spring series, Ukrainians, in the majority, in the south and east were disenfranchised, denied essential services, and under attack by a military and paramilitary axis aligned with the regime in Kiev, Zelensky for the past to years, and predictably voted to escape their oppression, invited Russians to join forces.

“Ukraine on Fire” is a movie that gives one a good look at the history of the players. No one is clean. Considering the corruption that is rampant and especially the special perks of top US politicos.. it was a mess before the invasion.

Oh please – an Oliver Stone movie is your go-to?

Mariopol, unfortunately, is not the first big city Russian forces have taken in this round of fighting.

It could be worse. It could be a general attack on the civilian population as in Serbia, Libya, Syria, Ukraine (Slavic Spring for the past eight years, two years under the current regime), and Afghanistan as an echo of Obama’s premature evacuation and segue to the second Iraq war across three continents.

“Unlike the migrant wave of 2015, when millions of men from North Africa and the Middle East swarmed Europe, the overwhelming number of refugees from Ukraine are women and children.”

Which parts of Europe are these women and children largely fleeing to? Because as I recall there’s been quite a bit of trouble with the other groups, particularly when it comes to women and respecting them. I’m kinda worried there’s a nasty double whammy brewing for these Ukranian refugees.

Mostly Poland, followed by Germany. I hope the find safety and shelter there.

We have several hundred thousand Ukrainian refugees here in our small country of Slovakia.

I spent the weekend at a friends house here in Nitra, Slovakia’s second largest city. He has turned the top floor of his 3 story house which has 3 apartments in it, into a refuge for 6 Ukrainian women and a small boy. In our small village near Bratislava we have several Ukrainian women living with families, and in the village next door someone has opened a house where 8 Ukrainian women are living.

We have no mosques in our country and according to the last Prime Minister “nor will we ever have” any mosques. The country changed the rules to make it very, very difficult to recognize any new “religions”, including Islam. I doubt you would find more than 100 Islamic people in the entire country. The Ukrainian women are safe here.

Several years ago when when people were leaving Syria, Slovakia allowed about 300 Syrians into the country but only Syrian CHRISTIANS! No muslims.

Russia seems determined to be the fly that conquers the fly paper.

And Hitler just wanted the Sudetenland….

Russia has legal title to and democratic consent in Crimea. They were invited by Ukrainians in the East, who have been disenfranchised, denied essential services, and under attack by the Kiev regime, military, and paramilitary axis since the Biden/Maidan/Slavic Spring, eight years, two years under Zelensky.

Those are Russian lies.
Russia was not invited in by the country of Ukraine, who have legal title to Crimea. Moral title to Crimea belongs to the Crimean Tatars, who were genocided by Russia.

Russia has no legal title to Crimea.
Russia has no democratic consent to Crimea because they force-migrated away the people that would vote against them.

Russia is a genocidal murderous regime that needs to get out of Ukraine and apologise.

Depends how far back one goes. Khrushchev gave the Crimea to the Ukrainian socialist republic (one big happy family). It was Russian to begin with. With the splintering of the USSR, Crimea went with Ukraine (note Ukraine and not “The Ukraine” as was the term when in the Soviet Union at the get go). Russia leased Crimea after that. As Ukraine became more anti-Russian after Maydan the Russians had second thoughts. This disenfranchisement of things Russian within Ukraine bubbled over and now spun totally out of control. As for all the weapons we are dumping into Ukraine…. how many will come back across the Southern Border to lay in wait to be used against us? It only takes two fired Stingers and proof of more to paralyze air travel in a country.

“Begin with” depends on how far back you want to go. Seems I recollect Russia was Ukrainian “to begin with”.

And you seem to be of the “We shouldn’t send any weapons because the Ukrainians will sell any weapons we provide them to the first terrorist they see.” group.

Quote
As for all the weapons we are dumping into Ukraine…. how many will come back across the Southern Border to lay in wait to be used against us? It only takes two fired Stingers and proof of more to paralyze air travel in a country.
Close Quote

The terrorists already have $85 Billion in first line US military weaponry we gave them free, why would they pay for any?

Russia did NOT lease Crimea. Russia only leased a small Naval Base in Crimea.

I haven’t seen a single media article from American sources criticizing tottering, dim-witted, feeble, incompetent dotard-puppet, Biden’s total failure of deterrence. The mere fact that this invasion happened on his which (as prior invasions occurred on Obama’s watch) already represents an appalling and obvious foreign policy failure. And, if President Trump had been in office while this invasion occurred, we’d never hear the end of media criticism.

Meanwhile, NATO and dotard Biden keep dithering, this alliance having been exposed as utterly feckless and useless. What the hell is the point of creating a grand, decades-old alliance intended to deter/contain Soviet aggression, if you can’t actually use it in a substantive manner?

And do what? Start a nuclear war with Russia? No thanks. Ukraine is a pawn in a game to weaken Russia, and the Russians stepped right into the bear trap.

Russia wants a lot of things. But can they actually take them with their forces on the ground? And if they fail, will they start using nuclear weapons?