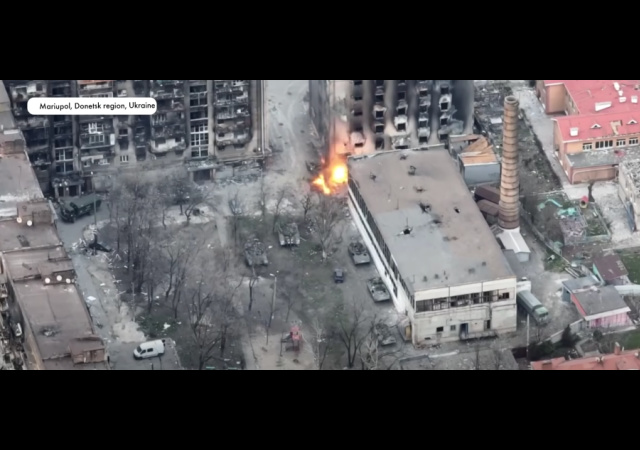 But Russia is also aiming for Kyiv over the alleged attacks on its border towns.

Sen. Steve Daines (R-MT) traveled to Bucha with Rep. Victoria Spartz (R-IN), who was born in Ukraine, and witnessed the war crimes committed by Russia. He went to Ukraine. President Joe Biden has not stepped foot in the country.

But Daines and Spartz went to Ukraine:

Sen. Steve Daines, R-Mont., became the first U.S. senator to visit Ukraine amid the Russian invasion, touring the mass graves in the city of Bucha and reporting “indisputable evidence of Putin’s war crimes.” He traveled with Rep. Victoria Spartz, R-Ind., who was herself born in Ukraine.

“While meeting with leaders in NATO countries bordering Ukraine, I was invited to meet Ukrainian officials in Kyiv and Bucha and see firsthand the butchery and war crimes committed by Putin,” Daines said in a statement. “There is indisputable evidence of Putin’s war crimes everywhere—the images of shallow mass graves filled with civilians, women and children are heart-wrenching.”

Daines told Fox News’ “Your World with Neil Cavuto” on Thursday, “I’ve seen a lot of horrific things over the years in terms of storm damages and accidents. I’ve never seen anything like this. I mean, these were children. These were children who were murdered.”

He went on: “It’s atrocities. It’s war crimes… there’s an irrefutable case being made right now for the war crimes of Vladimir Putin and the soldiers who committed them.”

Those defending Mariupol will not give up. But Russia is getting closer to capturing the important port city. The forces took over steel works in Mariupol:

Russia’s defence ministry has claimed it had captured the Ilyich steel works in Mariupol, one of the last industrial areas holding out in the besieged eastern city that has seen the war’s heaviest fighting and the worst humanitarian catastrophe.

Meanwhile, Ukraine said it had repelled Russian offensives in the town of Popasna and Rubizhne, in an area north of Mariupol. Both reports could not be independently confirmed.

Moscow now says its main war aim is capturing the Donbas, an eastern region of two provinces that are already partly held by Russian-backed separatists and that Russia wants Kyiv to cede. It has sent a new column of thousands of troops into the east for what Ukraine anticipates will be a major assault.

Moscow says it hopes to seize all of Mariupol soon, which would be the only big city it has captured so far.

The Moskva, the flagship of the Russian Black Sea fleet, sunk on Thursday. Ukraine claims it hit it with Neptune missiles. Russia said ammunition exploded onboard.

I’m guessing it’s the former because Russia hit a missile factory near Kyiv. The factory produces the missiles that supposedly hit the Moskva.

But Russia also insists that Ukraine shelled some of its border towns. Therefore Russia must step up its attacks and target Kyiv:

Russia’s defence ministry warned Friday it will intensify attacks on the Ukrainian capital Kyiv in response to strikes on Russian soil, after accusing Ukraine of targeting Russian border towns.

“The number and scale of missile strikes against targets in Kyiv will increase in response to any terrorist attacks or sabotage committed by the Kyiv nationalist regime on Russian territory,” the ministry said in a statement. Russia hit a “military” factory outside Kyiv late Thursday using Kalibr sea-based long-range missiles, it added.

Russia also threatened the U.S. if we keep arming Ukraine: “We call on the United States and its allies to stop the irresponsible militarization of Ukraine, which implies unpredictable consequences for regional and international security.”

One good thing that this is doing, it’s exposing the neocons and neolibs.

The Biden/Maidan/Slavic Spring, in the catastrophic Spring series, eight years, two years under the current regime. And an American Spring in progress. Throw another baby on the barbie… well, perhaps the midterms.

I see the Soviet gaslighters are out in force.

I think you mean they’re out in farce.

“”Russia’s defence ministry warned Friday it will intensify attacks on the Ukrainian capital Kyiv in response to strikes on Russian soil, after accusing Ukraine of targeting Russian border towns.””

Those Russians always did have a really unusual sense of humor.

Stalin reportedly said: Dark humor is like food; not everyone gets it.

Russian borders are sacred and inviolable!

It was entirely predictable that the Kremlin would (a) deny that the Ukrainians sank the Moskva even though that appears to be the case (b) then retaliate anyway by (c) inventing a false pretense for doing so.

That leaves the largest, most capable surface ships in the Black Sea Fleet the three 3800 ton displacement Admiral Grigorovich guided missile frigates. Hardly a replacement for the 12,000 ton Moskva. The three ships together displace the same tonnage as a Slava class cruiser. And they don’t have the command and control capabilities to function as a flagship.

Nations that aren’t Black Sea powers are exceedingly limited on the gross tonnage of the warship during peacetime, and are also limited on the number of days they can spend in the Black Sea.

But even nations that are Black Sea powers can’t send any ships through the straits once those nations become active belligerents in a war if those ships weren’t already homeported there before the outbreak hostilities.

The Turks have already denied passage to Russian warships per the provisions of the Montreux Convention. The Russians have two other Slavas, but they’re the flagships of the Northern and Pacific fleets. The Turks will deny them passage and the Russians certainly won’t be stupid enough to try to force those ships through.

So the Russians are stuck with what light surface forces they have in the Black Sea. They do have one Kilo class diesel-electric attack submarine and six improved Kilo class SSs. The improved Kilo subs are a threat as they do carry land attack cruise missiles. But of course they’re useless as command and control vessels.

I’ve seen most of the focus on the loss of the Moskva on her weaponry and the threat she posed. But the loss of her, the fleet flagship, and her command and control capabilities and her operations and planning spaces, limited though they are compared to the capabilities of our dedicated fleet flagships, carrier strike group flagships (aircraft carriers) and expeditionary strike group flagships (LHD/LHA amphibious assault ships) may prove more significant. They’ve basically lost the ability to command their fleet at sea.

May 9 is Victory Day in Russia; the day they celebrate their victory in the “Great Patriotic War” over Nazi Germany. Putin, it seems, wanted to have wrapped up his “special military operation in Ukraine by then and celebrate his own victory day. Imagine how joyous the celebration when the only results he has to show for this invasion is failing to achieve his major goal of taking Kyiv and losing his Black Sea flagship.