EU, Chinese leaders will meet in Brussels. The EU will tell China not to help Russia. I doubt they’ll listen. 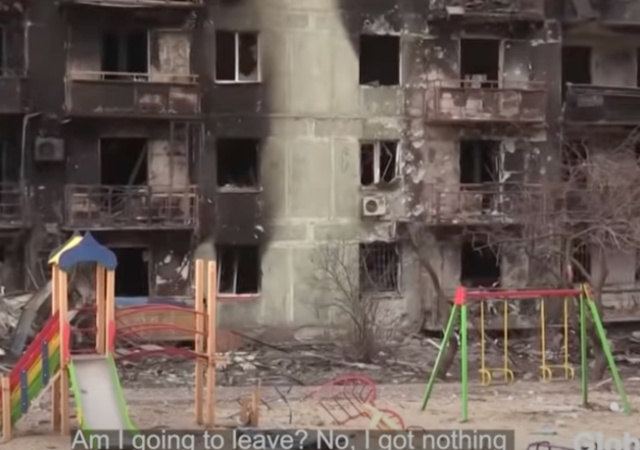 Vladimir Putin said Russia would stop going after Mariupol if Ukraine surrenders the city. The people of Mariupol, an important port city, refuse to surrender.

Russia promised a ceasefire so the remaining civilians can leave. To the shock of no one, Russia is still shelling the city.

EU Will Tell China Not to Help Russia

So EU and Chinese leaders will meet in Brussels on Friday. This should be fun:

EU and Chinese leaders will meet for a first summit in two years on Friday with Brussels keen for assurances from Beijing that it will neither supply Russia with arms nor help Moscow circumvent Western sanctions imposed over the invasion of Ukraine.

In uncommonly open language, EU officials close to the preparations of the summit said any help given to Russia would damage China’s international reputation and jeopardise relations with its biggest trade partners — Europe and the United States.

An EU official said China’s stance towards Russia would be the “million-dollar question” on Friday. Another pointed out that over a quarter of China’s global trade was with the bloc and the United States last year, against just 2.4% with Russia.

The UK claimed Russia is moving its forces in Georgia to Ukraine:

The UK’s Ministry of Defence says some Russian forces currently deployed in Georgia will be sent to reinforce troops in Ukraine.

It’s the latest sign that Moscow’s game plan on the ground is changing, five weeks into a largely stalled invasion.

The move is “indicative of the unexpected losses it has sustained during the invasion”, the ministry said.

It added that some of the redeployed forces are expected to be reorganised into three battalion tactical groups for combat.

Ukraine said Russia has not observed a ceasefire in Mariupol:

But Iryna Vereshchuk, Ukraine’s deputy prime minister, said there had been “no ceasefire” in Mariupol, and that Russian forces had not fully opened a route for evacuations to Ukraine-held territory. Earlier ceasefires to allow civilians to escape the city on Ukraine’s south-east coast have collapsed.

“The enemy continues to destroy, with air strikes, the remnants of infrastructure left in Mariupol, trying to destroy all living things,” Vereshchuk said on Thursday.

The people left behind have no food, water, electricity, and hardly any shelters since March 1:

Vereshchuk said Russia had only opened a humanitarian corridor to Berdyansk, a Russian-controlled city 80km from Mariupol, suggesting this would prevent transport from reaching the besieged city and taking civilians out. She added that 100,000 people, including the elderly, children and disabled, required immediate evacuation.

“Russia made a commitment and guaranteed that it would continue to take people out today,” Vereshchuk said. “We will see in the evening what the results of such commitments and guarantees will be.”

Earlier on Thursday she said 45 buses had been set to evacuate people but that the evacuation “depends exclusively and completely on Russia, because there are no Ukrainian troops there and these are the commitments that Russia has made to the world”.

Later in the day, Vereshchuk said the “occupiers” had not allowed the buses to go through Berdyansk, thwarting efforts to get them to Mariupol.

Good gosh. Evil people will be evil. Negotiate all they want. China is communist so there you go. Talk to evil until the end of time and they still are evil.

Keep in mind that Russia is the country Joe Biden is banking on to mediate an agreement between the US and the country that throws gay people off of buildings.

But, no mean tweets, amirite?

Sad. But the consequences of this war will be most profound in Africa and Asia. More people will end up starving to death because grain and fertilizer in Ukraine and Russia are locked up, than will die in the immediate violence of the conflict.

The wildlife will be eradicated

There are people giving real coverage of the war. Mariupol is a vital strategic port that if taken would allow a major encirclement of Ukrainian forces, which is why it is defended in such a determined fashion.

It will be a very long war.

The notion that the EU should tell China what to do or refrain doing is the same sort of western arrogance that precipitated the crisis in Ukraine. The levers of power in the west are largely in the hands of those who support a globalist agenda; post national governance in which mostly unaccountable bodies, the UN, IMF, WTO are wielded by a technocratic elite. These groups alongside corporations that view themselves not as corporate citizens of a particular nation but as detached global citizens as well as their fellow travelers who occupy the increasingly powerful but unelected bureaucratic positions of power in US and western governments seek not to strengthen their Nations but rather establish and maintain a globalist order unresponsive to the average person.

Almost like the bad guys are on our side of the fence, no?

No. Just because the developed west has more than its fair share of leaders that have nothing but contempt for the people that they govern doesn’t make Russia or China better. China is in the middle of the biggest ethnic cleansing and possible genocide since the Holocaust and Russian leaders – Putin in particular – have never met a dissident they didn’t either murder or send to a camp in Siberia. Putin is a world-class war criminal as is Xi whereas Trudeau et al. are – at this point – only envious of that kind of totalitarian might.

It doesn’t help with the US general in charge of US Army in Europe reportedly flew to Ukraine and personally gave medals of valor to Ukrainian soldiers.

Ukraine thought the US and Europe were fully behind them, especially with so many politicians’ families having access to the Ukrainian cookie jar. Russia thought they had more support in Ukraine and had terrible intel and war plans with the added bonus of unreal assessment of their armed forces.

The US has a feeble president and his Party that need a war to bolster their position and potentially cancel an election. FJoe Biden… “War President”!!! FDR incarnate. If a crisis shouldn’t go to waste…. how about a fist full.