Kyiv also decapitated the Russian in a Russian-Ukrainian Friendship monument from the Soviet era. 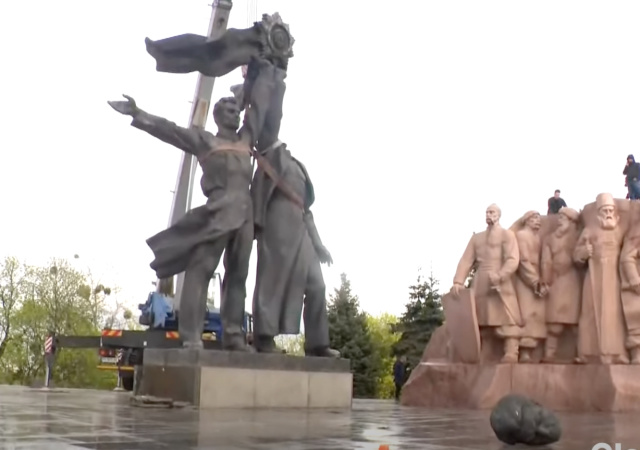 Russian President Vladimir Putin threatened unfriendly countries he would cut off their energy supplies if they did not pay in rubles.

Poland and Bulgaria will stop receiving Russian gas on Wednesday. Other countries still refuse to pay in rubles.

Kyiv Chops Russian Head Off of the Russian-Ukrainian Friendship Monument

The eight-metre (27-ft) bronze statue depicted a Ukrainian and Russian worker on a plinth, holding aloft together a Soviet order of friendship. The statue was located underneath a giant titanium ‘People’s Friendship Arch’, erected in 1982 to commemorate the 60th anniversary of the Soviet Union.

“We now see what this “friendship” is – destruction of Ukrainian cities … killing tens of thousands of peaceful people. I am convinced such a monument has an entirely different meaning now,” Kyiv mayor Vitaly Klitschko said.

Workmen started by removing one of the two bronze heads, which fell to the ground with a hollow clang.

As a crane lifted the monument off its moorings and gradually lowered it to the ground, a crowd of around 100 people cheered and shouted “Glory to Ukraine” and other slogans.

“Russia invaded Ukraine … Can we be friends with Russia? What do you think? This is our worst enemy, that is why the monument to Russian-Ukrainian friendship doesn’t make sense any more,” said Serhiy Myrhorodsky, one of the designers.

Well, Russia has to say anything to justify launching the full-scale invasion:

“The need for demilitarization is due to the fact that Ukraine, saturated with weapons, poses a threat to Russia, including from the point of view of the development and use of nuclear, chemical and biological weapons,” Secretary of the Russian Security Council Nikolai Patrushev, said according to state-owned news agencies.

The Kremlin has previously claimed without evidence that Ukraine is developing a nuclear weapon, but it escalated its accusations this week after Russian Foreign Minister Sergey Lavrov said that the threat of nuclear conflict “is real.”

“The danger is serious,” Lavrov told Russian media. “It is real. It should not be underestimated.”

Germany will send heavy weaponry to Ukraine. The West applied a lot of pressure on Germany to step up:

Christine Lambrecht, Germany’s defence minister, announced on Tuesday that Berlin would permit the shipment of anti-aircraft cannon tanks known as the Gepard — meaning Cheetah — to help Kyiv defend itself against Russia’s invasion. “We are determined to combine our efforts to help the Ukrainian people in this existential emergency,” she said.

Lambrecht unveiled the decision at US-hosted defence talks at the Ramstein air base in western Germany, organised to shore up support for Ukraine and co-ordinate the delivery of arms. Representatives from more than 40 nations are attending.

Lloyd Austin, US defence secretary, welcomed the “major decision”, suggesting that Berlin may look to send more equipment and “continue to look for ways to . . . provide good capability to Ukrainians”. But he warned that Ukraine’s backers had to “move at the speed of war”. The Pentagon chief said earlier that western countries would “keep moving heaven and earth” to supply Ukraine with weapons to defend itself.

Scholz, Germany’s chancellor, has for weeks resisted calls for the country to deliver heavy weapons, such as tanks and armoured personnel carriers, to Ukraine, saying such a move might trigger a direct military confrontation between Nato and Russia that could lead to a nuclear war.

This is only the beginning:

The spat between PGNiG and Gazprom is the first test in the stand-off between Europe and Russia over rouble payments, suggesting a willingness in Moscow to cut supplies that have helped to bring in billions of dollars of revenue since the war began.

“This is a warning shot to the rest of Europe,” said Laurent Ruseckas, an energy analyst at S&P Global, who added that drawing in alternative supplies from Germany to Poland would put further pressure on European gas prices.

Front-month future contracts tied to the TTF, Europe’s benchmark natural gas price, spiked as much as 15 per cent on Tuesday following local media reports on Russia’s plans to suspend gas flows to Warsaw.

Europe received about 40 per cent of its gas from Russia before the invasion of Ukraine and while the EU aims to reduce that reliance by two-thirds by the end of the year, member states would struggle to sustain economic activity with a prolonged cut-off of Russian supplies.

Officials in Poland, which has been working to wean itself off Russian gas in recent years, moved to reassure citizens that the latest move would not affect gas supplies.

Anna Moskwa, Poland’s climate minister, said the country was “prepared for a complete cutting-off of Russian [energy] resources”, including coal, gas and oil.

Who wants to step up and be the first kid with Iodine tablets in their lunch pail?

Hey Mailman, don’t sugar-coat it so much. Just come right out and tell us what you really think.

An apple a day keeps the doctor away.

But a Biden a day attracts the grim reaper.

Hey, Germany. Cutting off nuclear power and deciding to replace it with Russian gas was a really good decision, right?

You have to remember Merkel was an East German.

Olaf Scholtz, Germany’s current Chancellor, was the Vice President of the International Union of Socialist Youth and is a member of the Social Democratic Party of Germany – the largest Marxist party in Europe.

Democrats let this happen. But Trump was supposedly the one colluding?

Trump tried to warn Germany and anyone else who would listen. But did they? No, they laughed but they aren’t fucking laughing now!

That’s why I have no sympathy for any of these people. They all thought they were better, but Trump recognized what a thug Putin was. Now Europe and the idiot Biden are getting their just deserts.

I don’t have enough rubles to fill my tank. I’ll buy American gas.

I prefer American gas that came to me in a pipe from Texas rather than a giant oil tanker from Saudi Arabia.

Shared responsibility? Payment will not be accepted in the hyper-inflated dollar.