Eastern Orthodox faithful begin their Holy Week with hope: “God is with Ukraine.” 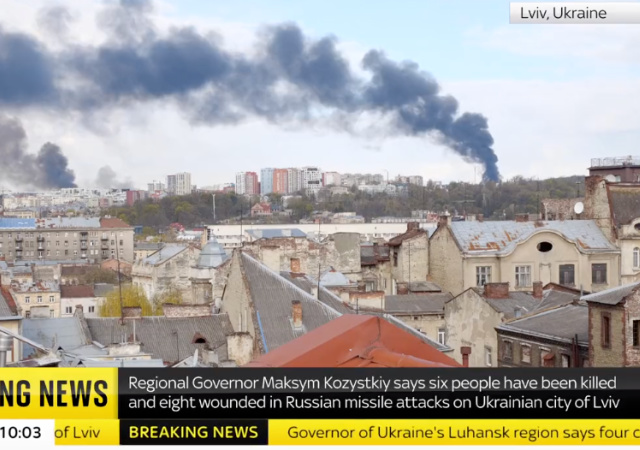 The Orthodox Church entered its Holy Week on Palm Sunday, the day Jesus arrived in Jerusalem. They will celebrate Easter this upcoming Sunday, the resurrection of Jesus. The resurrection gives us hope and shows us proof of God’s love. The Ukrainians still have hope.

Russia attacked Lviv in western Ukraine this morning. The city is right by Poland and preferred city for those leaving eastern Ukraine.

I wonder what NATO will do with the attack happening near NATO territory.

“We can now say that Russian forces have started the battle of the Donbas, for which they have long prepared,” Zelenskiy said in a video address.

“This morning, along almost the entire front line of the (eastern) Donetsk, Luhansk and Kharkiv regions, the occupiers attempted to break through our defences,” he said.

Russia has been bulking up its forces in the east of Ukraine using troops that it pulled out of Ukraine’s north and neighbouring Belarus, a close Russian ally.

In a post on Facebook, the Ukrainian armed forces command said that Russia’s main military force was concentrating on taking control of the entirety of the Donetsk and Luhansk regions that make up the swathe of land known as the Donbas.

“The second phase of the war has begun… Believe in our army, it is very strong,” the Ukrainian president’s chief of staff, Andriy Yermak, wrote on the Telegram messaging app.

The Russian military attacked Lviv, which is located in western Ukraine, on Monday morning. Authorities said the attack killed at least seven and injured 11, including a child.

Lviv sits right by the Polish border. Getting pretty close to NATO territory:

The owner of this Ukrainian tyre service shop should be kind of proud:
Russia has just spent $6.5 million to launch just one Kaliber missile to target the obscure garage outside Lviv. https://t.co/t2H81YElDT

#Lviv one hour ago. At least 5 #Russia missiles hit the Western city. Train station and storage units were targeted. pic.twitter.com/rzMEbcs70z

Mayor of Lviv Andriy Sadoviy says 7 civilians killed, 11 injured by Russian air strike on the Ukrainian city today. Among wounded is a 3-year-old boy who along with his mother fled Kharkiv because of the intense fighting there to what they believed was a safe place in the west. https://t.co/Gr0LqSKMy0

Regional Governor Maksym Kozystkiy says six people have been killed in Russian missile attacks on the Ukrainian city of Lviv.@JasonFarrellSky has the latest.

Ukrainian Foreign Minister Dmytro Kuleba told CBS News that Ukrainians are still fighting for Mariupol but the city is not the same. He also described it as the red line (emphasis mine):

MARGARET BRENNAN: Now to the Foreign Minister of Ukraine, Dmytro Kuleba. Minister, welcome back to the program. Mariupol governor says the city has been wiped off the face of the earth. How long can Ukrainian forces resist Russian control of that city?

UKRAINIAN FOREIGN MINISTER DMYTRO KULEBA: The situation in Mariupol is both dire militarily and heartbreaking. The city doesn’t exist anymore. The remainings of the Ukrainian army and large group of civilians are basically encircled by the Russian forces. They continue their struggle, but it seems from the way the Russian army behaves in Mariupol, they decided to raze the city to the ground at any cost.

MARGARET BRENNAN: President Zelensky said the elimination of military forces in that city will mean an end to all negotiations with Russia. Have you been instructed to stop contact with Russian diplomats?

UKRAINIAN FOREIGN MINISTER DMYTRO KULEBA: Well, we didn’t really have any contacts with Russian diplomats in recent weeks at the level of foreign ministries. The only level of contact is the negotiating team that consists of representatives of various institutions and members of Parliament. They can continue their consultations at the expert level, but no high level talks are taking place. After Bucha, it was- it became particularly difficult to continue talking with the Russians. But as my president mentioned, Mariupol may be a red line.

MARGARET BRENNAN: The general staff of the armed forces of Ukraine said last month that Russian soldiers were being told the war must end by May the 9th. What exactly are you expecting in the coming weeks?

UKRAINIAN FOREIGN MINISTER DMYTRO KULEBA: Intensification of heavy fighting in eastern Ukraine, in Donbas, large scale offensive of Russia in that part of Ukraine. And also desperate attempts of the Russian forces, as I said, and to- to finish with Mariupol at any cost. These are my expectations. And, of course, missile attacks on Kyiv and other cities across Ukraine seem to continue.

Bucha Mourn Those Who Died

In Bucha, where Kyiv said Russia killed dozens of civilians, worshippers marked Palm Sunday and prayed for their dead pic.twitter.com/8KMjO3vMuv

Russia shows no signs of ending the shelling despite it being Holy Week. Did the Ukrainians lose faith? No.

“God is with Ukraine, so it is clear we will win,” said Metropolitan Epiphanius, head of the Ukrainian Orthodox Church, as he led the Palm Sunday service.

Women attending mass alone asked Epiphanius to pray for husbands and sons who were away, fighting in the war.

At the back of the congregation, dozens of soldiers watched as Epiphanius said that for “decades”, the Church had witnessed Russia’s “evil intentions” and how it has used its “ecclesiastical influence as a tool to spread lies”.

The invasion did not begin with weapons, but “with deception, untruth and lies”, he said.

“It did not start with missiles, but with delusion,” he added.

In an apparent reference to Emmanuel Macron’s rejection of the term “genocide” – after the French president warned the West to be “careful” with such labels – Epiphanius urged his followers to “call evil ‘evil’, not an alternative point of view”.

“Marauders and murderers should be called criminals, and what they do is genocide of the Ukrainian people, for which there should be responsibility without a statute of limitations.

“Knowing Russia’s tricks, we will continue to fight bravely. As Christ overcame his death, so we will be victorious with his help.”

“I wonder what NATO will do with the attack happening near NATO territory.”
Nothing.

I disagree. They will, instead, ask for US help, and will hold our coats while we do the fighting and dying.

Ask for help ,yes ,as they have been doing. “We” are not going to be doing any of the rest of it.

It’s not that close to NATO territory. “Doing something” would involve getting into the fight. Not sure NATO is ready for that.

Well, from the nearest point of Lviv to NATO territory is 30 miles. Doesn’t sound like a lot but it’s hardly a border town.

Given NATO didn’t directly respond to the attack on the Yavoriv barracks, substantially closer to the border, I agree that NATO will do nothing overt in response.

Thanks to Mary Chastain for her tireless reporting on the war in Ukraine. The fog of war is so foggy today I can’t be sure what is really going on, but Mary’s reports are the best I know of.

What’s the big deal about 7 dead in Lviv?

America killed more than that many civilians just in its last day in Afghanistan. 13. Mostly kids.

In my opinion, the Russians are doing an amazing job avoiding civilian casualties. Especially when those “civilians” were given rifles and urged to make Molotov cocktails. And when Ukrainian soldiers drive around in civilian vehicles.

Whats the big deal about 13 dead, “mostly kids” in Afghanistan?

Whats the big deal about hundreds of dead teenagers in Hong Kong?

Whats the big deal about the Russians murdering 50 million+ in the last century?

Whats the big deal about the chinese murdering 50 million+ in the last century?

I sometimes wonder what the truth here really is

Always be wary of declarations that ‘Gott mit uns.’ If patriotism is the last refuge of scoundrels then religion might just be the first.

Its been my experience that when God chooses or backs a side, He lets it be known in no uncertain terms when He decides the time is right.