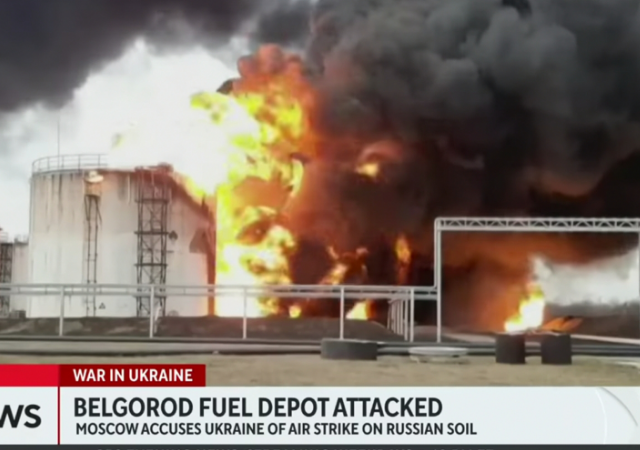 Having failed to take Ukraine’s capital Kyiv, Russia is abandoning its offensive in the north and swinging its main military thrust to the east of the country, news reports on Saturday suggest.

“Russia has revised its campaign plan after a month where it failed to seize Kyiv and other cities,” the BBC reported Saturday morning. “Russia’s main operations are now concentrated on eastern Ukraine – where it wants to capture the entire Donestsk and Luhansk regions.”

The shift in the Russian tactic has been acknowledged by the government in Kyiv. “Ukraine’s President Volodymyr Zelensky says a pullout of Russian troops is ‘slow but noticeable’ in the north,” the UK broadcaster added.

“Russian forces around Kyiv and in northeastern Ukraine seek to conduct a retrograde action—the orderly withdrawal of combat forces—for refit and further redeployment to other axes of advance,” the Washington D.C.-based think-tank Institute of War noted in a assessment released on Friday.

When the Kremlin ordered the invasion of Ukraine five weeks ago, Russia’s main military objective was the toppling of President Zelensky’s government in Kyiv. On February 24, as Russian ground forces began their march on the Ukrainian capital, President Vladimir Putin call upon the Ukrainian military to oust their elected leaders and “take power in your own hands.”

With the Ukrainian armed forces and civilian conscripts blocking the advance of the Russian armored columns in the north, the hopes of swift ‘regime change’ in Kyiv now appear to have been abandoned by the Russian war planners.

Ukraine’s President Zelensky accused the retreating Russian forces of laying booby traps in residential areas. The Russians were putting mines around abandoned homes and even human corpses, he warned in a video address to the nation.

Ukraine’s President Zelenskyy has warned his nation that retreating Russian troops were creating a “complete disaster” outside Kyiv as they leave mines across “the whole territory.”

“They are mining the whole territory, they are mining homes, mining equipment, even the bodies of people who were killed,” he said in a video address to the nation late on Friday.

His warning comes as the humanitarian crisis in the port city of Mariupol intensifies, with Russian forces blocking evacuation operations for the second day in a row.

After 37 days of fighting — which saw widespread destruction of cities and towns across Ukraine, Moscow is accusing the Ukrainian armed forces of conducting an airstrike on Russian soil. Ukrainian helicopters struck a fuel supply depot located 21 miles into the Russian border, the Russian government claimed on Friday.

Kyiv denied having carried out any cross-border strike, accusing Russia of staging a ‘false flag’ operation to derail any peace effort. “Ukraine is currently conducting a defensive operation against Russian aggression on the territory of Ukraine, and this does not mean that Ukraine is responsible for every catastrophe on Russia’s territory,” a Ukraine defense ministry spokesperson said.

Russia has accused Ukraine of carrying out an airstrike on an oil depot in Belgorod, a Russian city close to the Ukrainian border.

This is the first accusation of a Ukrainian airstrike on Russian soil since the war between the two countries began on 24 February.

A number of videos appearing to show an airstrike and the depot on fire have been shared widely on social media.

India’s position on the Ukraine conflict has earned Moscow’s praise. Visiting Russian Foreign Minister lauded New Delhi for toeing the Russian line and not joining the U.S. and the West in condemning the invasion of Ukraine.

As I noted in my Thursday’s op-ed in the Kyiv Post, “New Delhi has failed to take a . . . principled stance. India’s official position on the Russian invasion of Ukraine mirrors that of China.”

The Associated Press reported the Russian foreign minister’s praise for the Indian stand:

Russia’s foreign minister lauded India for not judging in a “one-sided way” as he discussed Moscow’s military involvement in Ukraine with his Indian counterpart on Friday, after Washington urged New Delhi to use its leverage with Russia to end the war.

Lavrov praised India for judging “the situation in its entirety, not just in a one-sided way.” (…)

Modi did not meet with British Foreign Secretary Liz Truss and Chinese Foreign Minister Wang Yi during their recent visits to New Delhi.

India is dependent on Russian arms supplies, roughly two-thirds of India’s military equipment is of Soviet or Russian origin. New Delhi also eyes cheap Russian oil in the wake of U.S. and Western sanctions on the Putin regime.

It is most disturbing that India continues to play both sides. But in their neighborhood maybe that is to be expected. Especially since the US has no ‘American’ President.

This is very in-character for India. It’s EXACTLY how they’ve been operating for 70-years. They’ll take anything from anyone if they can get what they precieve as a good price. Their navy and air force is a hodge-podge with US-made aircraft and ships sitting right next to Russian-made aircraft and ships (and others, for that matter).

Makes sense for them. Can you imagine trying to coordinate all that mismatched equipment in a major engagement with, say, China? What a clusterflop.

Not exactly. India for decades made no bones about being in bed with the USSR, especially the Marxists like Indira Ghandi. It’s only in recent decades since the collapse of the USSR that they’ve cozied up to the US as a counter to threats from China.

Indeed. The Indian govt was the epitome of the ‘non aligned’ movement. Which is completely understandable given their very late independence. The USA was very much non aligned in the wake of our own independence so we can hardly be upset that India then and now desires to put their own National interests in front of any Davos inspired WEF globalist BS.

I wish we could dump Davos and do the same.

Why what exactly has the west shown India in the last 20 years? How could India be sure it won’t be the next target of the West’s crusade to make the world more woke? It is on the other side of every cultural issue the west cares about.

What stops the west from making India the next target after India finishes off Russia’s economy?

Perhaps some helpful ways to prevent this would have been not invade Iraq to try and turn it into California, and not to make it clear the West hates Modi.

“Never let a crisis go to waste”. The Left loves to use crises, especially ones that they created or bungled their way into. While it is somewhat working now to obscure major issues here at home, it isn’t working out well for the rest of the world and, sooner or later, the U.S. But when the crisis is used against the Left/World and they can’t control it….then reality raises its ugly head. Russia has left Ukraine crippled and put many nations in dire energy and economical straights . No amount of spin and “investments in green clean energy” will stop the Dominos from falling. National self sufficiency must be the goal particularly for the U.S. To avoid more of this. Purging the U.S. of politicians and bureaucrats with fingers in Foreign country cookie jars and beholding to foreign influence is a must. America First ..or else America will be last. FJB…..

Come on, Man! Brandon just told us the solution is to buy electric cars, that we would save $80 per month in gas costs. By the way, he failed to let us know how much the extra electricity to charge the battery would cost or that the gas savings would not even cover the extra interest on the much larger loan required to cover the cost of the electric car. Incidentally, I consider grain/food problems, directly from Ukraine and because of fertilizer costs worldwide, also to possibly be “dire”.

I…I apologize. How could I doubt our glorious leader… FJoe Biden? Yep… “DIRE” fits the coming YEARS of famine with about 2 billion (defined by NWI/Davos/WEF as worthless) people at terrible risk and the rest of us maybe a little better. But we will be able to sit in our electric cars without power, walk to the food lines for our daily allotment, and shiver in our shelters.. formerly called homes and forced share them with the blessed illegal aliens and no longer homeless. Remember “Orange Man Bad, Mindless Dirty Pedo Sock-Puppet Good”

Slaviwood? The Biden/Maidan/Slavic Spring in progress. Eight years, and two years with the current regime.

Dementia Joe child molester is upset that his fave dirty money laundering destination has been inconvenienced.

The only thing that is certain is that the media is booby trapping the news with false stories.

Indian Arms purchasers from top to bottom have their hands out for bribes to buy. The Russians gladly pay and pay. The USA, nope.