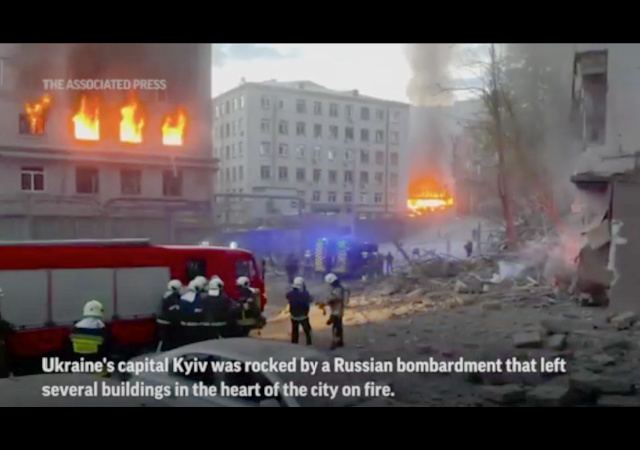 Mariupol’s mayor warned of epidemics as conditions remain unsanitary. Russia has surrounded the town and only some remain.

Willy Joseph Cancel leaves behind a wife and baby:

“My husband did die in Ukraine,” Brittany Cancel, the widow of the 22-year-old Marine veteran, told Fox News Digital. “He went there wanting to help people, he had always felt that that was his main mission in life.”

Cancel leaves behind his wife and a 7-month-old son. He appears to be the first U.S. citizen to die while fighting alongside Ukrainians in Ukraine.

“My husband was very brave and a hero,” Cancel said. “I did not expect to be a widow at 23 years old or for our son to be without a father. All I want is for him to come home, and to give him the proper burial he deserves.”

The Marine veteran signed up to work for a private military contracting company on top of his full-time job as a corrections officer shortly before the war in Ukraine broke out at the end of February, Willy Cancel’s mother, Rebecca Cabrera, told CNN. After the war began, the company asked for contractors to fight in Ukraine and Cancel agreed to go, the mother said. Cabrera did not respond to Fox News’ request for comment.

Mariupol is a Disaster Zone

Mariupol City Council warned that the unsanitary conditions in the city could become dangerous:

In a Telegram post, the officials said about 100,000 residents in Mariupol “are in mortal danger not only due to shelling, but also intolerable living conditions and unsanitary conditions” – naming in particular the illnesses of cholera, dysentery and E. coli infections.

“The occupiers are unable to provide the existing population with food, water and medicine. Or just not interested in it,” Mariupol Mayor Vadym Boychenko said Thursday. “They block all evacuation attempts. And without that, people will die.”

“Mariupol is a crisis within a crisis. Thousands of civilians need life-saving assistance. Many are elderly, in need of medical care or have limited mobility,” Guterres told reporters after the talks with Zelenskiy.

“They need an escape route out of the apocalypse.”

Referring to the possibility of a United Nations and ICRC-coordinated humanitarian corridor for the hundreds of civilians believed to still be in Azovstal, Guterres said: “As we speak, there are intense discussions to move forward on this proposal to make it a reality.

“I can only tell you we are doing everything we can to make it happen. I’m not going to enter into any comment that could undermine that possibility,” he said.

Biden Wants Another $33 Billion for Ukraine

The funding request includes over $20 billion for weapons, ammunition and other military assistance, as well as $8.5 billion in direct economic assistance to the Ukrainian government and $3 billion in humanitarian aid. It is intended to cover the war effort’s needs through September, the end of the fiscal year.

“We need this bill to support Ukraine in its fight for freedom,” Biden said at the White House after signing the request on Thursday. “The cost of this fight – it’s not cheap – but caving to aggression is going to be more costly.”

The United States has ruled out sending its own or NATO forces to Ukraine but Washington and its European allies have supplied weapons to Kyiv such as drones, Howitzer heavy artillery, anti-aircraft Stinger and anti-tank Javelin missiles.

Ukrainian president Volodymyr Zelenskiy hailed what he called “a very important step” by the United States.

At least 10 people have been injured after Russia fired two missiles into Kyiv on Thursday, during a visit by UN Secretary General Antonio Guterres.

The rockets shook the central Shevchenko district and one of them struck the lower floors of a 25-storey residential building, injuring at least 10 people.

“There was an attack on Kyiv … it shocked me, not because I’m here but because Kyiv is a sacred city for Ukrainians and Russians alike,” Mr Guterres told Portuguese broadcaster RTP.

President Zelensky said the blasts “prove that we must not drop our vigilance. We must not think that the war is over”.

I am shocked, SHOCKED… that a young American working as a mercenary for an unallied country with the most corrupt government on the planet is the most recent example of our rulers killing off the flower of young manhood for the sake of keeping the money laundering operations of our Western elites intact.

“The Geneva Convention declares that mercenaries are not recognized as legitimate combatants.”

A fool and his life are soon parted

Sad that no one mentions Ukrainia’s attempt to draw Moldova into the conflict by threatening Transnistria.

Pulling at emotional heartstrings without a reason is propaganda not news.

In other contexts LI knows to be skeptical of mainstream media why not in the case of this war?

1. This was not his fight- he made a purely FINANCIAL decision to go “play” warrior. (and he paid for it)

2. His greed will now cost his family which is a great dishonor and disgrace to REAL warriors as well as himself

3. Ultimately this mercenary died for money he will never see fighting a war he could never hope to make a difference in while totally ignoring all the potential loss his family will endure forever for his idiotic choices.

Even the write up is filled with bullsh!t. If he wanted to “help someone” join the Red Cross.

He wanted to play Rambo after reading an old issue of SOF when he finished a late night round of COD so he could come home and tell war stories. I hope his epitaph was worth it.

There can be many reasons to fight. !looking back at the Abraham Lincoln Brigade in the Spanish Civil War.

GDP for Ukraine is 150 billion dollars. So, pumping in 33 billion leaves a lot for all the “big guys” in DC. NATO has always been at War with Eurasia.

Yep… National Socialism vs. International Socialism. As Lenin said… communism is socialism in a hurry… and going for the same endpoint. Since the Biden Boyz are paying for “private contractors” to fight in Ukraine… it’s just one little degree of separation from active military in Ukraine… well…obviously in Ukraine. Considering that FJoe Biden is crowing about all the US is doing to weaken Russia….. it’s not like Biden isn’t trying to push Russia into escalation. Biden/Austin/Blinkin/Jarrett/NWO/WEF want a war to finish off Russia.

Sad really that a Veteran Marine thought or needed to go to Ukraine.

As it has been said, there is no such thing as a “former” Marine. Veteran Marine is much more accurate.

More proof the Russians are making an effort to achieve their goals while minimizing civilian casualties. Two probably very expensive missiles, not a TU-160 carpet-bombing the neighborhood from high altitude.