Ukraine thinks it can retake the 42 villages on Friday. 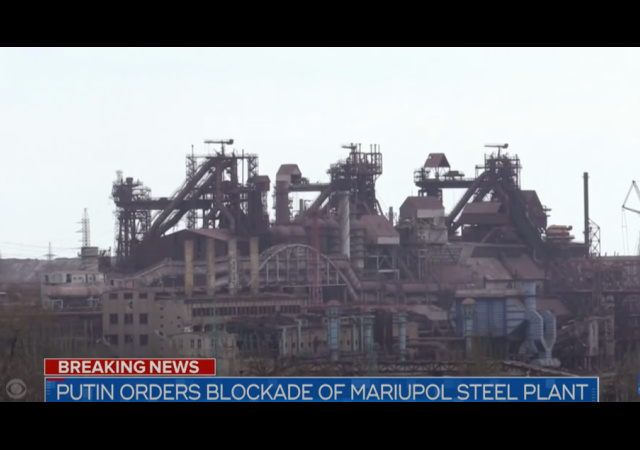 It’s still dicey in Mariupol as Russia claims 42 villages in the Donetsk region.

Three buses left Mariupol with evacuees but unfortunately not many left on said buses.

Ukraine’s president has appealed to Europe to toughen sanctions against Russia and increase military aid, telling Portugal’s parliament his country was fighting for its survival.

“We want heavy armaments to end the occupation of our cities,” Volodymyr Zelensky said during a video address on Thursday. “I appeal for your help to accelerate and strengthen sanctions and [to increase] military aid.”

Zelensky asked Portugal to press for a European ban on Russian oil and gas imports and to support Ukraine’s bid to join the EU. He also accused the Russian military of committing widespread atrocities, saying its air force deliberately bombed civilian areas.

In Mariupol, he said, Russian troops were trying to “hide their war crimes so that we have no proof”.

Mariupol is on the Edge

The head of the company that owns the Azovstal steel plant said it’s almost over. Ukrainians have been holed up at the steelworks plant as they defend their city:

Yuriy Ryzhenkov, the CEO of Metinvest Holding, told CNN: “When the war started we had stocked quite a good stocks of food and water in the bomb shelters and the facilities at the plant so for some period of time the civilians, they were able to use it and basically survive on that.

“Unfortunately all the things, they tend to run out, especially the food and daily necessities.

“I think now it’s close to a catastrophe there”.

The Chechen leader showed off a “liberated” Mariupol.

Russia's "liberation" of Mariupol looks like this, according to Ramzan Kadyrov's Telegram channel pic.twitter.com/3iAhVqPnZJ

Three buses managed to leave Mariupol with evacuees. Unfortunately, not matter could make it out:

Three school buses filled with evacuees from Mariupol arrived in Zaporizhzhia on Thursday after crossing through territory held by Russian forces.

Valentina, 73, told AFP: “My apartment has been destroyed just like the house of my son.

“From day one we were in a basement. It was cold. We were praying to God. I was asking him to protect us.”

Ukraine’s Deputy Prime Minister Iryna Vereshchuk said the number of evacuees was far smaller than had been hoped for.

“Nothing has worked. Only 79 people could come. There were no green corridors,” she said, adding that many of the evacuees had been “robbed by the Russians”.

Ukraine could take back the 42 villages Russia captured in Donetsk:

An aide of President Volodymyr Zelensky said the captured villages did not mean Russia had won, and Ukrainian forces could shortly regain control of them.

Olena Symonenko said: “Today 42 villages were added to the list of those that have been occupied. This is at the expense of the Donetsk region.

“This happened today and it might be that our forces will win them back tomorrow”.

It comes as Vladimir Putin claimed his troops had gained control of Mariupol following months of intense fighting.

Ukrainian soldiers had been trapped for a number of days in the Azovstal steel plant in the port city, under constant siege by Russian forces. 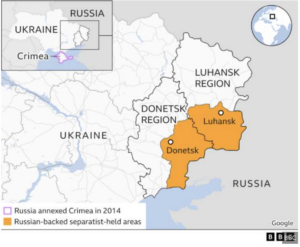 As I said, Russia has been fighting a defeat in detail just inching along letting the Ukraine just collapse.

The Left and the Ukraine are using this as a PR, political and fundraising tool.

There are clearly hidden agendas in play here that we have yet to see.

Gotta wonder how much of that $800 million will eventually make its way back to Biden.

It’s 650 miles from Lviv, the main staging point for flow of war material to Kharkiv. Every inch of that subject to air interdiction by Russia. Not to mention the staging area itself being vulnerable to missile strikes. The Russians have ground up the better Ukrainian in the east and will seek to consolidate their control of the Donbas and their newly acquired land bridge from Crimea. The Ukrainians are in a very tough spot.

Didn’t Russia lose 15 aircraft yesterday? To be fair, that’s a Ukrainian claim – I’ve only seen video of five of them going down – so it may not be that many.

Nonetheless I do disagree with your assessment of Ukraine’s position. They have the morale, the troop numbers, at least some ammunition, a tremendous command and control structure, significant information capture and sharing and over 200 former Russian tanks.

That said, I think they are low on ammunition and losing 42 villages in a day doesn’t sound good – it’s interesting that the wording suggests they were ‘occupied’ rather than ‘captured’, which raises questions regarding what did actually happen, but that does impose Russian control over a broader area.

The Russians don’t need air dominance or even air superiority, they only need air parity to threaten the convoys. Coupled with missile attacks on staging areas they combine to force the Ukrainians to divert ADA resources to convoy security and protection of Lviv which results in less ADA assets available in the east.

Captured equipment is nice and unquestionably a big propaganda victory. I don’t minimize the the impact, but effectively fielding that equipment requires trained crews and at least JR officers and NCO with experience in maneuver HIC warfare that the Ukrainians don’t possess. Nor do they have the logistics train to support them. At best, these IFV, which are the bulk of the captures, along with a few tanks could be used as a semi static defense.

The reality is the majority of better quality forces for both parties were in the east. The Ukrainian forces in the east have been largely destroyed as cohesive units. The remaining Ukrainian forces still operating at the BN level in the east are largely isolated or worse surrounded without hope of resupply.

Can Ukraine still achieve a victory with the amount of western govt assistance? Maybe but that hope is diminishing. I would bet that Russia is able to consolidate control of their gains in the South along the sea of Azov, secure control of the Donbas and create a contested area between the Donbas and the Dnieper. It’s not a certainty and nothing is simplistic in warfare but that seems to me the likely result.

I don’t have a dog in this fight and certainly not cheering for either party. I am simply offering my opinion based on my military experience and education. IMO, the Ukrainians should seek a diplomatic solution that ends the fighting and concedes as little as possible but just enough to satisfy Russian objectives. The western govts apparent willingness to fight to the last Ukrainian seems like a poor outcome for the Ukrainian people.

Exactly. The more that clown Zelensky thumps his chest, the longer this thing drags out and the more dead Ukrainians there will be.

I tend to agree with your assessment. It is difficult to stomach that our administration may be using the Ukraine tragedy to distract from their domestic political problems and to try to create an environment where the nation rallies to support a wartime leader despite all of the myriad of policy failures.

Even worse would be a scenario where the Biden family and DC insiders are getting huge kickbacks from the massive funds we sending to Ukraine. If that is the case then obviously some Ukrainian officials have to be involved as well.

One thing that truly stands out in the whole Western alliance to support Ukraine vs. Russia is the contributions by nation. Essentially the big bucks are all coming from the US. The major European nations of NATO/EU are not major players at all. Germany and France have contributed very little in comparison.

This seems to be largely a US operation. It really doesn’t seem that the European nations consider the conflict to be a material threat to their peace and stability.

I fear that at some future point the facts of this debacle are going to paint a very bad and corrupt picture of the Biden regime.

I find your analysis deeply flawed.

You claim Ukraine needs officers and NCOs with experience in ‘maneuver HIC warfare’ yet we’ve seen very clearly that this is something the Russian forces absolutely lacked from the outset – and that was before losing many officers, BTG commanders and NCOs.

You say IFV are the bulk of the captures; while there are more IFV captured than tanks, the 200 tanks I cited are actual tanks. If you want to include other armoured armed vehicles, add another 300.

There’s also no real evidence that the Ukrainians have lost their heavy armour or artillery in the East, or the North, or indeed anywhere outside of Kherson and Mariupol. They’re short on artillery ammunition and feel quite profligate with their ATGMs but compare to documented Russian losses and it’s Russia that’s going to run out first – only one side can resupply, and it’s not the one running out of parts for its factories.

If the better quality forces for Russia were in the East, why did they suffer such serious losses to their paratroopers North of Kiev?

You claim Ukrainian forces in the East have been largely destroyed as cohesive units yet the Russians haven’t taken Kharkiv, haven’t budged the pre-February frontline in the Donbas, haven’t made any material gains since the opening week of the war.

Meanwhile you’re curiously ignoring that the Russians suffered so many losses north of Kiev that they had to abandon that whole flank and that something approaching a quarter of Russia’s entire invasion force has been needed to take on a small number of Ukrainians in Mariupol. And still haven’t won.

There’s some weird myth floating around that Ukrainian forces in the East are largely isolated. Outside of Mariupol, which forces, and where?

I’m not seeking to challenge your military experience and education, I’m just encountering substantially different sets of information to you and can’t reconcile the two.

The underdog in me wishes you were correct. The realist in me says you are not. It’s not my fight nor yours and I would hope we could agree that this episode needs to end as soon as diplomacy can facilitate that.

In that part of the Ukraine, “liberated” would be more appropriate than either “captured” or “occupied.” Remember, this mess started as a coup/civil war between pro-EU and pro-Russian Ukrainians.

He wasn’t alone. Hell, we probably caused the coup that kicked it off.

Putin wants to destroy Ukraine. Send the survivors to Siberia, adopt out the children to Russian families and divide the land into several small “people’s republics”.

It is literally a war of annihilation

Interesting rumors as to why they are hanging on to that installation. A lot of underground facilities.