Zelenskyy on the new sanctions: “This package has a spectacular look. But this is not enough. Still it can hardly be called commensurate with the evil that the world saw in Bucha. With the evil that continues in Mariupol, in the shelling of Kharkiv, in Russia’s attempt to launch a new global bloody offensive in Donbas.” 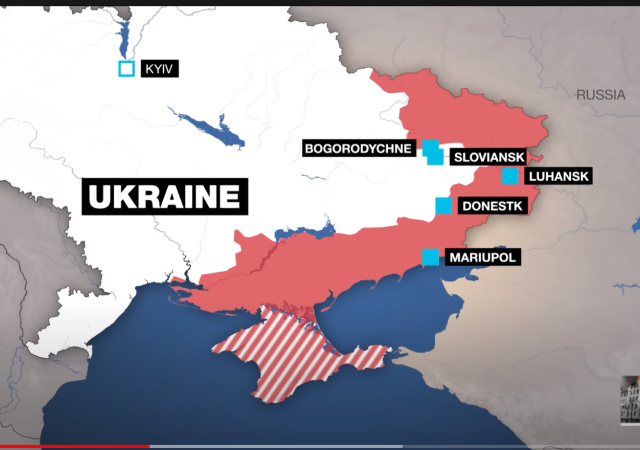 Day 43. Or should I say about Day 3,000 since no one can remember the invasion happened eight years ago? Anyway, the Pentagon said Russia completed its pullout from Kyiv and Chernihiv.

But more than likely Russia will head back to Donbas to regroup.

NATO’s leader is urging its member countries Thursday to send “both light weapons but also heavier weapons” to Ukraine as foreign ministers are gathering in Belgium to map out the alliance’s next steps in the fight against Russian President Vladimir Putin’s military.

The plea comes as British intelligence suggests Russian forces are targeting infrastructure in a deliberate bid to sabotage the Ukrainian military’s supply lines ahead of what is expected to be a renewed assault in the country’s east, which has now become Moscow’s main territorial objective after failing to capture Kyiv.

“I have urged allies to provide further support of many different types of systems, both light weapons but also heavier weapons,” NATO Secretary-General Jens Stoltenberg said.

Ukrainian Foreign Minister Dmytro Kuleba, who is in Brussels Thursday for the meeting, also made his focus clear: “My agenda is very simple… it’s weapons, weapons and weapons.”

Hostomel is located northeast of Ukraine and not far from Bucha. It once housed 17,500 residents but after the Russian occupation, it is destroyed and 400 people are missing:

Speaking to Ukraine-based Hromakdse Radio, Taras Dumenko said that after 35 days of Russian occupation in the town of 17,500 residents, their bodies cannot be found and that some people were arrested by Russians and no one has been seen ever since.

The local official said that many of the town’s residents who’ve been identified as missing or killed have yet to be found and that some bodies were found in Bucha, where Russians are suspected of killing of 300 civilians.

About 3.5 kilometers separate the two towns and Hostomel was hotly contested in the first week of Russia’s renewed invasion for having a strategic airfield.

The disclosure of missing residents echoes other atrocities Ukrainian are discovering as they enter liberated settlements in the Kyiv region. Over the weekend, at least 300 civilians were found killed execution style, some of whom children, and many blindfolded with their hands bound behind their backs.

Ukrainian President Volodymyr Zelensky knows what all of us realists know: Sanctions won’t work against Putin. He described the latest round as weak:

In President Volodymyr Zelensky’s latest Facebook address, he calls on world governments to increase their sanctions against Russia, warning that a failure to do so would equate to “permission” for it to continue its attacks on Ukraine.

“Today, Western countries announced a new package of sanctions against the Russian Federation,” he said.

“This package has a spectacular look. But this is not enough,” he continued.

“Still it can hardly be called commensurate with the evil that the world saw in Bucha. With the evil that continues in Mariupol, in the shelling of Kharkiv, in Russia’s attempt to launch a new global bloody offensive in Donbas.”

He says that Ukraine continues to insist on a “complete blockade” of Russia’s banking system, and for the democratic world to refuse to buy Russian oil.

He also called out western leaders, who he said had not found the backbone yet to stand up to Russia.

“Some politicians are still unable to decide how to limit the flow of dollars and euros to Russia from the oil trade, so as not to jeopardise their own economies,” he adds.

“The embargo on Russian oil supplies will be applied anyway. The format will be found. The only question is how many more Ukrainian men and women the Russian military will have time to kill, so that you, some politicians – and we know you, can borrow a little determination somewhere.”

…But Fighting Intensifies in the East

Russia goes back to eastern Ukraine, which is where they have been since 2014. The fighting there has intensified as Russia tries to grip harder on Donbas:

Russia’s military offensive in eastern Ukraine is already intensifying. You can see it in the long queues of traffic driving west towards relative safety; you can feel it in the deserted streets as you drive through the towns and cities of the Donbas; and you can hear it with the increasing sound of Russian artillery.

Russia and its proxies now control around 90% of Luhansk and more than half of Donetsk – the old industrial heartlands of Ukraine. There is smoke rising across a landscape already scarred by mining and factories.

Ukrainian forces have been fighting a war here for the past eight years. Their units include some of the country’s most battle hardened troops. Western officials say Ukrainian forces stationed in the Donbas are the best trained and equipped units.

As the Russian offensive pushes from the north, east and south there is a real danger they may soon be encircled and cut off.

Ukraine has already lost ground to Russia. But they are digging in for the fight. As we travelled east towards the frontline we saw new defensive positions and trenches being dug.

The sound of Russian artillery grew louder as we drove to a Ukrainian frontline position in Luhansk. The rumble of shelling interspersed with the occasional burst of small arms fire. We were within 500 metres of the Russian positions.

No More Russia in Kyiv and Chernihiv…

“Russian forces near Kyiv and Chernihiv have completed their withdrawal from the area to re-consolidate and refit in Belarus and Russia,” a Pentagon official told reporters on Wednesday.

“We are not showing Russian forces in or around Kyiv or in or around Chernihiv,” Pentagon spokesman John Kirby later added, saying that Russian President Vladimir Putin “has achieved zero of his strategic goals”.

It comes days after Russia announced that it would focus its efforts on Ukraine’s eastern Donbas region.

A senior Pentagon official, speaking on condition of anonymity, said that the Russian troops may be heading back to Kyiv in the future, and that it remains unclear if the retreating troops will return.

According to the Institute for the Study of War think-tank, the Russian units retreating from around Kyiv are unlikely to “regain combat effectiveness for some time”.

Wars are easy to start, expensive to continue and very hard to stop.
We already know how Ukraine will be divided when this is over. But, too many important people want this war to continue because they want Russia to bleed. Meanwhile, the citizens of Ukraine bleed more.

“…want this war to continue because they want Russia to bleed.” And deflect attention from the most incompetent Presidential administration ever….

Our country is bleeding too.

This is becoming one big propaganda op.

I guess it’s too much to expect NATO to stay in their lane.
Ukraine’s an honorary member, now?
Why pay dues? Why sign treaties?
“What-ev-ah! I do what I want.” — Eric Cartman

Democrats salivate at all the corruption opportunities when Zelensky asks for aid to rebuild a destroyed Ukraine.

And the propaganda flies as politicians try to figure out how to profit from the latest crisis while increasing their grip on their populations and inch closer tk a new world order.

Can we have a war where all the generals and politicians that start it are all forced to serve on the front lines?

I think the count is now 6, maybe 7 dead Russian generals in this war – they’re losing one a week on average.

Not sure what the survival rate will be for the ones being sacked in Russia either.

Over the last 300 years, Russia has sought to wipe out Ukraine, from the time of Peter the Great up to today. Whether it be the Ukrainian language, culture, literature, borders or the people themselves, it is in the nature of Russians to do this. We just get to see it today in real time.

This is Russia’s last chance to expand to defensible borders before the coming demographic collapse of the country.

There is a lot of gas in the east of the Ukraine. And water for Crimea.

There is a lot more propaganda than there is gas or oil.

What NATO should do is conduct multi-division maneuvers on the borders with Russia and Ukraine. They would be “practicing”to cross the border into Russia and Ukraine. Biden should retract his insane declaration that US forces where not going to fight in Ukraine. Zolynsky should publicly invite NATO to enter Ukraine and fight with Ukraine against Russia. This should motivate Putin to withdraw.

This is how and why Russia entered the Ukrainian war. They were invited by Ukrainians who had been disenfranchised, denied essential services, and under assault by a Kiev-aligned military and paramilitary axis in the wake of the Biden/Maidan/Slavic Spring. Eight years, two years… 8 trimesters under the Zelensky regime, and NOW (pun intended) there is an empathetic feint.

A foolish stunt like that would turn ‘Mad Vlad’ into “Mad Ivan” with a loud kaboom.

Obviously your proposal would have an impact on Russian troop deployment and a shift in their order of battle which might ease pressure on Ukraine. That’s fine as a goal but could you please explain how and why such actions would be serving the direct national security interests of the US and the American People?

What could possibly go wrong???

And if Russia does a pre-emptive strike with the units he has kept out of Ukraine and the third world war starts nuclear holocaust happens because whoever starts losing uses the first nuke and planet Earth goes down.

There is a good reason that isn’t happening.

Reminds me of an old Jody….

committing nato members to supplying heavy weapons(particularly aircraft) to the ukranians is one hell of a gamble–difficult to see how vlad would not interpret the same as an (albeit indirect) attack on his forces–perhaps a precursor to outright troop commitment by nato members–what a prudent strategy–push a known demagogue into a corner, where he has nothing to lose