Mariupol is hanging by a thread. 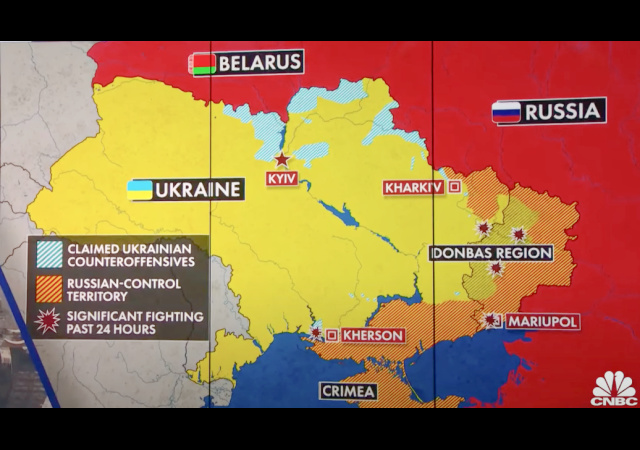 Russia has been in Donbas since 2014. Don’t let anyone tell you otherwise. But it continues to get worse.

Ukrainian President Volodymyr Zelenskyy said the second phase of the war has begun in Donbas. Reports coming out of east Ukraine seem to confirm this fear.

The situation in Mariupol is still deteriorating.

Russia said it opened an evacuation corridor in Mariupol but Ukraine said 4 have been killed:

Russia on Tuesday claimed it had opened humanitarian corridors for soldiers who voluntarily surrendered from Mariupol’s Azovstal steel plant – a site of refuge and resistance for Ukrainian fighters.

“Taking into account the catastrophic situation at the Azovstal metallurgical plant in the city of Mariupol, as well as being guided by purely humane principles, the Russian Armed Forces have opened a humanitarian corridor for the withdrawal of Ukrainian servicemen and fighters of nationalist formations who voluntarily laid down arms,” Colonel General Mikhail Mizintsev, head of the Russian National Defense Management Center said.

The claim comes just hours after Moscow set a deadline for noon local time – 5 a.m. EDT – calling on all forces bunkered in the Azovstal Iron and Steel Works plant to surrender “without exception, without any weapons and without ammunition.”

But Ukrainian Deputy Prime Minister Iryna Vereshchuk said that there had been no such agreement made with the Russian forces and noted that four people were killed when trying to evacuate Mariupol on Tuesday.

Russia has kept European gas traders guessing about how much gas it will send to the continent, as state-controlled energy giant Gazprom opted again not to book extra pipeline capacity.

While markets are worried that Putin could turn off the taps, a spell of warmer weather and an easing in prices have started to temper demand.

Gazprom chose not to reserve capacity for exports to Germany via the crucial Yamal-Europe pipeline in May. That’s the fourth straight month it’s chosen not to book the link.

It comes after the Kremlin hinted that buyers still have time before Putin’s demand for gas payments in roubles kicks in.

Besides those, there are about 22 groups north of Ukraine that are likely being resupplied and refitted, the official said.

#Ukraine President @ZelenskyyUa has confirmed that the attack on Donbas began.He said that in the east & south of our country,Russians are trying to attack a little more thoughtfully lately than before, looking for a weak spot in the defense. Ukraine needs support more than ever pic.twitter.com/6Hn5aJlHIV

The Donetsk and Luhansk regions, which already broke away from Ukraine, are facing even more shelling and Russian advancements:

Ukrainian media has reported a series of explosions along the front line in the Donetsk region, with shelling taking place in Marinka, Slavyansk and Kramatorsk.

Ukrainian officials and local media also claimed that further explosions were heard in Kharkiv, Mykolaiv in the south and Zaporizhzhia in the southeast.

Serhiy Haidai, governor of the Donetsk region, said Russian forces had taken control of the villages of Kremenaya and Lugashchnine, both northwest of the town of Severodonetsk, Roland Oliphant, Joe Barnes and Jamie Johnson write.

“Evacuation from there is already impossible,” Mr Haidai wrote on Telegram early in the morning.

Residents of Luhansk were warned that this was their last chance to evacuate.

The Kremlin said it would concentrate on “liberating” the Donetsk and Luhansk regions, the mainly Russian-speaking regions where war first broke out in 2014, after retreating from Kyiv at the end of March.

I tell you, the reporting on this war on Legal Insurrection is vastly different than what is reported on even other conservative websites.

If you go to RedState you will be forgiven if you believe Russia is getting stomped by Ukraine and the world. I love streiff’s writings but on Russia you can tell he never stopped being the cold warrior he was during the Reagan years. Not that that’s a bad thing, but his view on the war is jaundiced.

Google Colonel Douglas Macgregor for a military expert’s take on the war in the Ukraine.

Cliff Notes version: Russia is winning. Much costlier than Putin expected, but still winning. The dangerous part will be when the West realizes its wishful thinking doesn’t match reality.

Other sites are reporting that large Ukrainian forces in the east are close to being cut off from supplies of food and ammunition if they aren’t already.. if correct and Russia controls the airspace and blocks land access then it is just a matter of time till those Ukrainian forces surrender or are destroyed.

Curiously he doesn’t highlight how vulnerable Russia’s forces in Izyum are to losing their supply chains, doesn’t factor in the Ukrainian forces freed from defending the North, ignores the likelihood of Kherson falling and Russia having to shift its forces south to defend Crimea and seems to forget that Russia’s forces are being backfilled with old men, poorly trained foreign troops (from Syria) and units so decimated they’re refusing to return to combat.

Add to that the warming weather will turn the battlefields to mud for the next month and then in June the real fighting restarts. This is a variation on the Winter War in Finland…. however Russia doesn’t have the overwhelming numbers Stalin had. The Russian military’s shortcomings have been deep and painful. Russia has created worldwide suffering. If held accountable, the country would cease to exist and be picked clean of all it’s value to pay for the damage.

Hard to know the truth especially since the the reports come from the Russian media and western corporate media, neither of which have much credibility in my opinion.

As I understand it the Ukrainian forces have been more or less in their current positions since hostilities began agaio Russian speaking militias in 2014.

It seems like it would be very difficult for Ukraine to move large reinforcements across such a large mostly open area if Russian aircraft control the skies and in theory should be able to devastate any Ukrainian relief column.

At any rate the results should be obvious in a few weeks regardless how the news is reported.

Since 1917. We should have nuked the bastards in 1946 and saved the world from suffering the last 75 years.

Remember that 70% of food inputs are Energy. Natural Gas to make the fertilizer, gasoline and diesel for the trucks and tractors and harvesters. And, energy for transporting the crops to the processing centers and then to stores.

In Germany, where natural gas went from $6 to $32, they just quit making fertilizer. Period. So, what will that mean to the price of next year’s crops?

In the long run, it’s probably good that Russia is holding back natural gas to pressure the Europeans. This situation will force them to understand how vulnerable they have made themselves by shutting down their nuclear power and reverting to Russian gas and dirty coal to power their economies.

If the Europeans had any common sense, they would build nuclear power together with renewables to electrify as much of their power as possible, and then saving their limited supplies of natural gas and oil to make fertilizer and chemical feedstocks.

The most stupid decision of all was Germany’s decision to end its nuclear power. This decision was pushed by the “Greens”, whose political and moral bankruptcy has forced Germans to use coal instead of nuclear, becoming one of the most polluting states in the EU.

Europeans elected to exchange reliables for intermittents, and spread the Green blight on the basis of the hypothesis of [catastrophic] [anthropogenic] climate cooling… warming… change. That said, go green, emit for life.

The Greens in the UK are disparaged as ‘watermelons’. Green on the outside, red on the inside.

Their support for marxist ideology discredits and casts into suspicion their other policies, including their illogical anti-nuclear stance.

The British Government are finally starting to realise this. Far too slow, rather too late, but hey, I’ll be dead by the time civilisation collapses.

Right about now I’m guessing the ‘Greens’ are getting nervous. Hungry and cold people can turn dangerous.

No they aren’t and they simply don’t care.

They know they are a “movement” (no name, address, anything to take or anything else) and have nothing to fear about anything from anyone.

Quite probably true, but like with anything or anyone on the Left, the “Wrath of the Lord” needs to be brought down on them soon. We still say that in these parts.

I still say it too and agree it needs to happen ( the sooner the better) but I have not heard trumpets yet.

OK and exactly how much did it hurt them or their cause?

What exactly did it undo?

What did it slow them down or stop them on?

WEF list needs to be published in full and every single one hunted down and hanged…including our local celeb asshats.

Boomerang effect with collateral damage. Russia, for their part, is mitigating the progress of sanctions through currency reform.

That said, two years with the Zelensky regime and Slavic Spring in progress.

Joe Biden announced from the White House just moments ago that he has a solution to the war in Ukraine. “I am sending the Easter Bunny to shoo Putin away.”

Doesn’t anyone remember that Biden did everything but beg Putin to invade, just a couple months ago?
All of this could have been easily avoided.

Biden did everything but give Putin his blessings to invade.
A few weeks ago.
This could have been avoided.