“Ukraine is preparing for “big battles” against Moscow’s forces in the east of the country.” 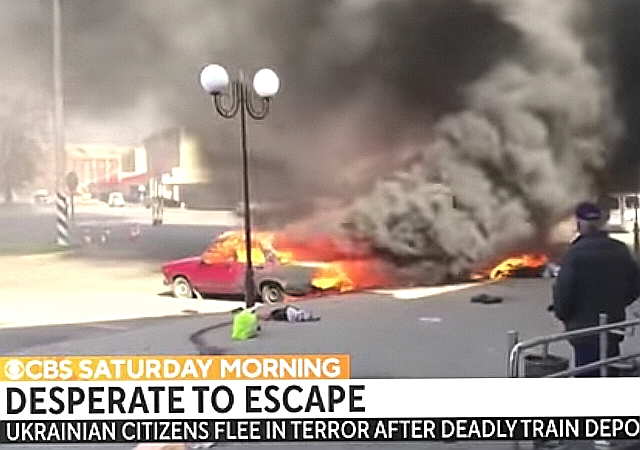 The Ukrainian government is organizing mass evacuations in towns and cities in the east as Russian military shifts the thrust of its offensive.

The Ukrainians are gearing up for a massive Russian offensive as Moscow relinquishes the attempted encirclement of Kyiv in the north and rushes the troops to the east. “Ukraine is preparing for ‘big battles’ against Moscow’s forces in the east of the country, officials in Kyiv said, as thousands of civilians flee in fear of an imminent Russian offensive,” the TV channel France24 reported Sunday.

The changing Russian tactic could mean more bloodshed on Ukrainian soil, news reports suggest. “Ukrainian forces dug in and Russia’s military lined up more firepower Sunday ahead of an expected showdown in eastern Ukraine that could become a decisive period in a war that has flattened cities, killed untold thousands and isolated Moscow economically and politically,” The Associated Press reported.

The revised Russian invasion plan appears to be the capture of Ukraine’s eastern industrial heartland and cutting off its access to the Black Sea — turning the remaining part of the country into a land-locked rump state.

The UK-based SkyNews reported the evacuation efforts in the east:

The Ukrainian deputy prime minister has this morning confirmed that nine humanitarian corridors will be opened for attempted evacuations on Sunday.

This will include an evacuation route for private cars from the besieged southern city of Mariupol.

Iryna Vereshchuk said: “All the routes for the humanitarian corridors in the Luhansk region will work as long as there is a ceasefire by the occupying Russian troops.”

Earlier, officials in Ukraine said nine trains were being prepared for civilian evacuations from the eastern region of Luhansk.

Luhansk regional Governor Serhiy Gaidai added that a school and a high-rise apartment building were shelled early on Sunday in the city of Sievierodonetsk.

The large-scale evacuation plan comes after a Russian missile hit an eastern Ukrainian city of Kramatorsk on Friday, killing 52 people and injuring more than 100.

With Russian troops moving away from Kyiv, UK Prime Minister Boris Johnson was among the first European leaders to visit Ukraine. On Saturday, the British PM made an unannounced trip to the besieged capital and met President Volodymyr Zelensky.

Johnson pledged more military aid to the country, including a shipment of 120 armored vehicles and anti-ship missile systems.

Austrian chancellor Karl Nehammer also arrived in Kyiv the same day to meet with President Zelensky and travel to the town of Bucha, where a mass grave was uncovered after the Russian military withdrawal.

Mr Johnson’s visit to Kyiv was not announced in advance and the first indication he was in the city came when a photograph of his meeting with President Zelensky was put on Twitter by the Ukrainian embassy in London.

A Downing Street spokesman said: “The prime minister has travelled to Ukraine to meet President Zelensky in person, in a show of solidarity with the Ukrainian people.”

In a statement after the meeting, Mr Johnson paid tribute to “President Zelensky’s resolute leadership and the invincible heroism and courage of the Ukrainian people”, saying: “Ukraine has defied the odds and pushed back Russian forces from the gates of Kyiv”.

He said: “I made clear today that the United Kingdom stands unwaveringly with them in this ongoing fight, and we are in it for the long run.

“We are stepping up our own military and economic support and convening a global alliance to bring this tragedy to an end, and ensure Ukraine survives and thrives as a free and sovereign nation.”

The Ukrainians have the courage of a lion.

President @ZelenskyyUa has given the roar of that lion.

The UK stands unwaveringly with the people of Ukraine.

The Russian pullout in the north has been marred by reports of mass graves and the execution of unarmed civilians. Almost a week after Ukrainian forces discovered a mass grave with 300 bodies in the town of Bucha, some 12 miles from Kyiv, authorities on Saturday reported of another grave containing dozens of civilians in a village near the Ukrainian capital.

A grave with dozens of Ukrainian civilians is reported to have been found in the village of Buzova, close to Ukraine’s capital, Kyiv.

Taras Didych, head of the Dmytrivka community that includes Buzova, told Ukrainian television that the bodies of the civilians were found in a ditch near a petrol station.

The death toll was yet to be confirmed. (…)

With Russian troops retreating from their attack on the capital and focusing their offensive on Ukraine’s east, the grave in Buzova is the latest reported mass grave to be discovered.

The Ukrainian claims of widespread war crimes by retreating Russian troops have been backed up by the Western intelligence. According to Hamburg-based weekly Der Spiegel, the German intelligence agency (BND) intercepted radio communication between Russian troops discussing the mass killings in Bucha.

The German intelligence also pointed to the role of mercenaries brought in by Moscow to quell the Ukrainian resistance. “The BND material also apparently provides evidence that members of the Russian mercenary unit called the Wagner Group played a leading role in the atrocities,” Der Spiegel reported Thursday.

On Saturday, the UK Ministry of Defense released intelligence accusing the Russian military of “disproportionate” attacks on civilians. “Russia’s departure from northern Ukraine leaves evidence of the disproportionate targeting of non-combatants including the presence of mass graves, the fatal use of hostages as human shields, and mining of civilian infrastructure,” the British military  intel said.

Russian rockets hit the eastern Ukrainian city of Dnipro causing major destruction, reports on Sunday afternoon suggest. “The airport itself was destroyed, as well as nearby infrastructure,” city officials said.

No doubt the last couple week withdrawal by Russia was a regrouping to start again.
One more time a good read on this war is
https://thediplomad.blogspot.com/2022/04/woke-lies-wars.html
Still not much verification to go on so be careful

The fog of war is one thing. When you learn that both sides are actively operating fog machines, it’s quite another.

In wartime, truth is so precious that she should always be attended by a bodyguard of lies.

I don’t think its as much fog (loss of perception in the fast moving world of combat) as it is a deliberate misinformation campaign ( which is also a wartime standard).

I don’t rule out the possibility that its possible the Russians discovered something (possibly even cooked up by the deep state maybe with China) that they launched a pre-emptive strike against.

China’s “alleged support” could be nothing hut a ruse.

The only thing I am sure of is that we have been fed nothing but biased propaganda from the beginning by all sides with the intent to mold public opinion and perception for things yet to be seen and that as of right now, NOBODY knows the actual truth of what triggered this, Russia’s true motives and goals and what is really going on .

There is a difference between outright lies and simply missing details. You are correct up to a point in that all sides are biased but its pretty obvious that Russia has lied over and over, been deceptive and misleading at every turn.

Of course the Ukrainians have the advantage that non-government bodies have provided photographic evidence of many of the claims.

Russians discovered something? That makes zero sense, think about it, all they have done is lied as a pretext for invasion so why on earth would they no say if they had an actual reason?

The mystery of what is in the Azovstal still remains. No matter what they are hiding, it will be quite interesting.

A =few days ago., they tried to sneak a merchant vessel in. Rather clumsily. I wonder if it was just a probe to see what the Russians would when they tried something more serious.

Iron, coke and steel mostly. Which is useful if you’re trying to defend against invaders.

Of course, Mariupol still has 120,000 civilians in it. Well, 120,000 that haven’t left yet; how many of them have been murdered by the Russian forces won’t be known for a while yet.

I get it –I don’t know everything about this war. But it infuriates me that the US can watch people being slaughtered and not do anything about it. Who are we?? GO, Go Ukrainians, we’ll send you missiles but no batteries to operate them but you are doing great keep being destroyed ——— ???

What exactly would you expect the US to do?

Other than go and fight, little else is going to matter.

“Who are we?” you ask- have you ENLISTED? You ready to deploy, fight and possibly die for them?

If not, then who are YOU? ( to make such a statement about “US” with no personal skin in the game)

So far this proves my initial assessment of the hostilities.

Russia has a reason ( good and just to them obviously- whether it would be to us is another matter) and Russia has been in full command of the mission, tempo and everything else since the beginning and will achieve whatever her goals are in spite of all efforts to the contrary.

We simply CANNOT believe or trust and reports on this action ( especially the US, Russian and Ukrainian medias as they all have a bias and agenda regardless of what your personal views of the conflict are)

Sadly, I fully believe the Russians are the bad guys here but the Ukrainians are certainly not “good guys” and I STRONGLY SUSPECT that the “invasion” could be more “justified” than we have been led to believe.

“Russia has been in full command of the mission, tempo and everything” Seriously?! You believe that!?