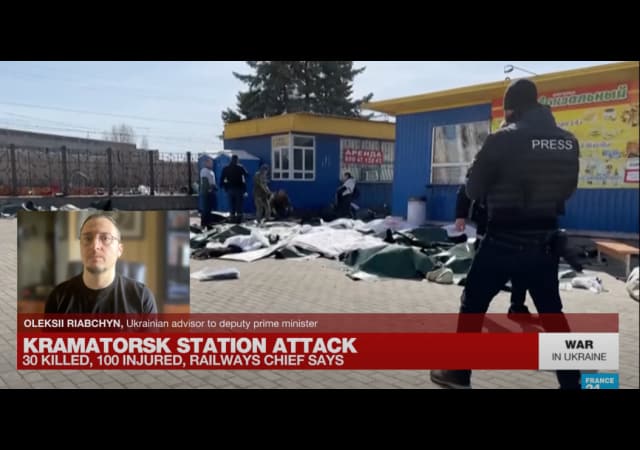 Day 44 of the full-scale invasion. Ukrainian officials said the deaths and shelling of Borodyanka are “much more horrific” than the massacres in Bucha. The town is ruined.

But we also found out that Fox News reporter Benjamin Hall is recovering from the horrific injuries he received in an attack that killed two colleagues.

Hug your loved ones. Cherish every second with them. Don’t take anything for granted.

Kramatorsk in a city in the Donetsk Oblast. It is located near Donetsk, which is part of an area controlled by pro-Russian separatists and Russians since 2014. From The New York Post:

“According to operational data, more than 30 people were killed and more than 100 were wounded,” it added.

The railroad station was being used for the evacuation of civilians from areas under bombardment by Russian forces, according to Reuters, which said it could not independently confirm the deadly strike.

Pavlo Kyrylenko, the governor of the Donetsk region, said thousands of people had been at the station at the time of the attack.

“The ‘Rashists’ (‘Russian fascists’) knew very well where they were aiming and what they wanted: they wanted to sow panic and fear, they wanted to take as many civilians as possible,” he said.

A video on Telegram has been verified of Ukrainians killing Russian captives near Bucha:

A graphic video shared on pro-Russian Telegram channels appears to show Ukrainian soldiers murdering the men in cold blood. The video has been verified and geolocated to Dmytrivka, a town seven miles southwest of Bucha.

In the video, Ukrainian soldiers survey the aftermath of an apparent ambush on retreating Russian troops. At least three Russians lie in pools of blood on the tarmac, seemingly dead. One of them is clearly suffering from a head injury and has his hands tied behind his back. The men all wear the white armbands of Russian troops.

In the corner of the screen, the barrel of a gun appears and fires two shots at the man. The man continues to shudder. The gunman moves and takes aim at the Russian soldier’s head. He shoots again and the man stops moving.

The Ukrainian soldiers, identifiable by their blue armbands and insignia, repeatedly shout “Glory to Ukraine”. They also insult the dead men.

Borodyanka sits 15 miles away from Bucha where Russian occupiers killed over 300 people.

The Russians used both as a base as they tried to invade Kyiv, which is southwest of the cities. The residents could not fight back but they tried. They used Molotov cocktails and any weapons they could find.

About 90% of the Borodyanka residents left before the Russians arrived. The Russians shelled and attacked the town nonstop.

The residents went back this week to absolutely nothing:

Arsen Bilevsky, a school director who evacuated after Russian troops arrived, wandered the main street on Wednesday, stopping here and there to take photos and shake his head in disbelief.

“It was a quiet and beautiful place,” Bilevsky said. Now, it’s “where all the horrors happened.”

It’s too dangerous for many people to live here, he said. “There’s no photo or video that can capture the atmosphere here now. There are a lot of mines planted. Mines on doors, mines in houses, mines in basements.”

Sergiy Davydenko, 36, came home Tuesday after weeks away to find his apartment had been trashed by soldiers using it as a base: The fridge emptied, furniture missing, computer broken, his belongings scattered all over.

“They lived here,” he said, pointing to his pullout couch. It was closed when he left, he said, but open when he came back. “They also lived in the basement. They brought mattresses down there. I found my TV down there.”

Asked how it felt to find that Russian soldiers had helped themselves to his home, he replied, “It’s not the worst.”

“We Have Significant Losses of Troops”

But this is the first time we’ve heard Peskov admit to the West that Russia lost a lot of troops.

"We have significant losses of troops".

Vladimir Putin's press secretary Dmitry Peskov says it's a "huge tragedy to us" to have lost Russian troops during the war in Ukraine.https://t.co/X3flQUBL0r

"NATO is tailored for confrontation."

Kremlin spokesman Dmitry Peskov says that if Finland, which has an 800-mile border with Russia, and Sweden join NATO "we'll look to rebalance the situation."https://t.co/CI2SxieQBM

.@markaustintv asks: 'Does Putin worry about ending up in a war crimes court?'

Dmitry Peskov responds saying 'no, we don't see any possibility for that.'https://t.co/CI2SxieQBM

To sum it up, I've lost half a leg on one side and a foot on the other. One hand is being put together, one eye is no longer working, and my hearing is pretty blown… but all in all I feel pretty damn lucky to be here – and it is the people who got me here who are amazing! pic.twitter.com/HNjO6PbdGf

Its been over three weeks since the attack in Ukraine and I wanted to start sharing it all. But first I need to pay tribute to my colleagues Pierre and Sasha who didnt make it that day. Pierre and I traveled the world together, working was his joy and his joy was infectious. RIP pic.twitter.com/gbHduLmd5e

‘”NATO is tailored for confrontation.”

Kremlin spokesman Dmitry Peskov says that if Finland, which has an 800-mile border with Russia, and Sweden join NATO “we’ll look to rebalance the situation.”‘
moving the chess pieces into position as the start of WWIII?

I wonder what they will ‘rebalance’ with? Those clowns can’t even take Kiev. The Russian forces have been in the field far too long, under supplied and failing morale. This type of thing brings on the killing of civilians on purpose which is what they are doing.

If Russia were weakened enough, maybe China would move to take a bite out of its far eastern haunches

Yes, Russia does propaganda all the time. Ukraine just isn’t very good at it yet.

What are your grounds for doubting the provenance of that video?

I’ve said on here that I have no doubt Russians have committed war crimes. I hold Ukraine to the same standards, and can entirely believe that their soldiers have too.

(I haven’t seen the video myself)

It might just be that we think you need to prove someone guilty first? Most would like some kind of neutral investigation before proclaiming a war crime.

I thoroughly support an investigation.

That doesn’t stop me querying why someone thinks it’s Russian propaganda.

Or a handmade tale from a Western-backed, Kiev-aligned axis, that has disenfranchised, denied essential services, and attacked Ukrainians for the past eight years, two under the current regime, with “benefits” (e.g. redistributive change).

I think it is highly probable that some Ukrainian soldiers did kill captured Russian soldiers (we know the Russians have done it a lot). I mean not everyone is able to contain their anger when their country is invaded and people slaughtered.

This is a real war, not the Hollywood sanitized version. In a real war, the reason that they had to come up with the Geneva Conventions is because taking prisoners actually weakens the forces doing the capturing because they have to divert troops to hold the prisoners. It is easier to kill them. And in pretty much every war since humans started having wars, all sides have killed prisoners. Add in that if your country has been invaded and your people and family massacred, you are going to want revenge. If you are the invaders, you are going to want to revenge your comrades who were killed by those nasty people defending their homes. It happens and it always will happen in war. It is not something to be proud of, but it is reality. Americans have lived outside of the realities of violent life and death for so long that it shocks them.

How Russia will die
https://youtu.be/UwPMtmuuVNw

Russia going after Sweden would be interesting: the Russians have demonstrated themselves to be inept in the Ukrainian war. They’d have to get to Sweden somehow, and a combined operations amphibious assault is one of the most difficult military operations to perform. I don’t see the Russians being capable of doing that. Going through Finland would open an entirely different can of worms; the Finns would bleed the Russians for every meter of travel.

On the other hand, Sweden doesn’t have much of a military these days. Some of it is overseas doing UN peacekeeping missions and therefore is unavailable. The Swedish navy and air force are high quality and low quantity; ditto for the home guard.

No doubt the Swedes, like the Ukrainians, would fight hard. Would the Russians?

Sweden doesn’t need much of a military. They have national service and train most of them in guerilla warfare.

Any invasion may look and feel incredibly successful for several days. At most.

Apparently Kramatorsk was struck were Tochka missiles, no longer used by Russia. Russia uses Iskander missiles. Do Russians have them? Yes, but Ukraine has many more.

Maybe Russia used them to blame it on Ukrainians, but then why put antiUkrainian messages on them? Kind of defeats the point.

“no longer used by Russia”

The Russians don’t throw anything away. They still have all their old tanks in storage under the Urals for AFTER a nuclear war.

I’m sorry for your reading deficiency. You will not that I said Russians still have the, but weapons are like iphones. You sell your old model to get the next model.

Ukraine has a lot more.

I still begs the question, if Russia wants to blame Ukraine, why did they paint them with antiUkraine slogans..

By 1945, German soldiers who surrendered to US GIs had a 50% chance of getting shot on the spot. Our soldiers had lost patience with an enemy that kept fighting after they had clearly lost.

Russians and Ukrainians are a lot harder people than Americans.

Finland has resisted joining NATO because of fear of Russian consequences.
After seeing The Ukraine invasion, it seems to me this is the perfect time for them to join.
Russia is busy with its current problems in Ukraine and Finland can join without fear of an immediate Russian invasion.
Russia is likely to remain a pariah state for years to come.
So they were likely be no economic implications either.