Russia targets Ukrainian railways: “Nato, in essence, is engaged in a war with Russia through a proxy and is arming that proxy. War means war.” 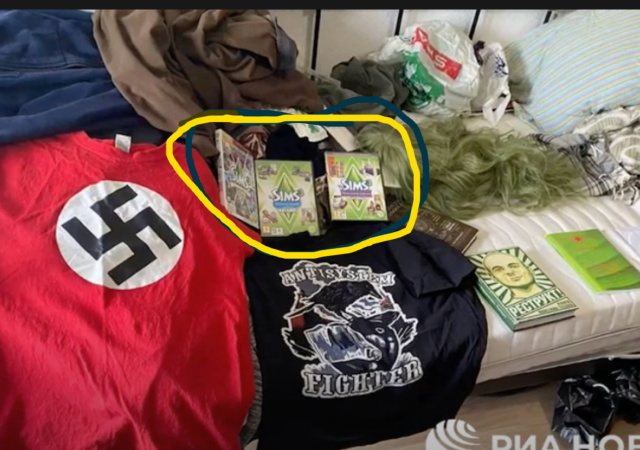 The full-scale invasion of Ukraine by Russia is still raging. Officials found a new mass grave in Mariupol.

Russia has also declared any deliveries to Ukraine as fair game.

But I wonder if Russia would ever succeed in another World War because they have some awful spies.

Transnistria, the pro-Russian breakaway region of Moldova, blamed Ukraine for the attacks on its land:

“The traces of these attacks lead to Ukraine”, TASS cites Vadim Krasnoselsky, the self-styled president of the breakaway region as saying.

“I assume that those who organised this attack have the purpose of dragging Transnistria into the conflict.”

Transnistria has been subject to several attacks in the past day, local authorities say, after a military unit was targeted, blasts tore through Transnistria’s state security HQ and two explosions damaged old Soviet-era radio antennae.

Moldova’s president said on Tuesday that the attacks in the Russia-backed region were an attempt by factions within the territory to increase tensions, and the Kremlin voiced serious concern.

Putin wants “unfriendly” countries to pay for their energy in rubles. Those countries said no. Now Russia will likely shut off the gas:

Russian energy giant Gazprom told Poland’s PGNiG it will halt gas supplies along the Yamal pipeline from Wednesday morning, PGNiG said in a statement, although the Polish government said it had sufficient reserves.

Earlier, data from the European Union network of gas transmission operators showed physical gas flows via the Yamal-Europe pipeline from Belarus to Poland had halted, but they resumed later on Tuesday.

Poland’s energy supplies are secure, Poland’s climate ministry said on Tuesday, adding that there was no need to draw from gas reserves and that gas to consumers would not be cut.

The FSB agents displayed the “evidence” against the assassins. I cannot stop laughing. I guess they got instructions to show three sim cards and thought that meant The Sims game? There’s also the “Signature unclear” signature. Literally says “signature unclear”

And in these pictures from the raid we have a "Ukrainian neo-Nazi starter pack" courtesy of the FSB pic.twitter.com/5FSvpze1lG

This just gets better and better

On his show tonight, Solovyov says Zelensky ordered his assassination because he "once tried to get a job on Russian state TV but wasn't talented enough" (with subs) pic.twitter.com/ozXP81egMD

Russian FSB has fabricated a "plot" to kill Russian TV propagandist Solovyov. Allegedly by Ukrainian SBU and Nazis. One of the "evidences" is neonazi inscription on a book. Signed by "Signature unclear". Yes, FSB got an order to sign it with a "signature unclear" – and did so! pic.twitter.com/P1vnDOXOIB

Hmmm…fires at fuel depots in Bryansk, Russia, caused the country to extend a state of alert in three regions along the Ukrainian border.

Did Ukraine target the fuel depots? Or is Russia doing this on purpose to make a case to attack Ukraine?

Ukraine has accused Russia of targeting the railways.

Russian Foreign Minister Sergei Lavrov warned of WWIII and that the country will target any deliveries to Ukraine:

Deliveries of Western weaponry to Ukraine mean that the Nato alliance is “in essence engaged in war with Russia” and Moscow views these weapons as legitimate targets, Russia’s foreign minister said on Monday.

“These weapons will be a legitimate target for Russia’s military acting within the context of the special operation,” Sergei Lavrov told state television in an interview posted on the foreign ministry’s website.

“Storage facilities in western Ukraine have been targeted more than once (by Russian forces). How can it be otherwise?” he said.

“Nato, in essence, is engaged in a war with Russia through a proxy and is arming that proxy. War means war.”

Also from The Telegraph:

Speaking to Russian news agencies, he said: “Good will has its limits. But if it isn’t reciprocal, that doesn’t help the negotiation process.”

He added that the Ukrainian conflict will end with an agreement but its content would depend on the military situation.

It comes after Ben Wallace, the Defence Secretary, estimated that 15,000 Russian troops have been killed in the two months since Vladimir Putin launched his invasion of Ukraine.

He told MPs that Britain will send a small number of Stormer armoured vehicles fitted with launchers for anti-air missiles to Ukraine.

High-resolution satellite images show 40m trenches being dug at a cemetery near Vynohradne, about seven miles east of the city.

The images, released by Maxar Technologies, a private American company that has been monitoring the war from space, suggest that excavation of the trenches began at about the same time that another mass grave was dug at Manhush cemetery, west of Mariupol.

The first signs of activity in the Vynohradne area date to between March 22 and 29 and the site has since been expanded several times.

The city council says that its officials buried 5,000 people before it lost control of Mariupol. The mayor, Vadym Boychenko, said that taking into account those killed since, including those buried in Manhush and Vynohradne, more than 20,000 civilians had died in the fighting. 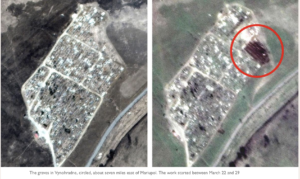 Biden – “Because of the actions we’ve taken, things have begun to change. End of quote.”

“Nato, in essence, is engaged in a war with Russia through a proxy and is arming that proxy. War means war.”

Remind us, how many Russian ships were sunk delivering that stuff to Haiphong? I mean war means war right?

The fact we didn’t actually fight a war doesn’t mean others can’t fight a war in the ‘proper’ fashion. Those war materiel transports are generally considered legitimate targets.

Meh.
Let’s see a mushroom cloud.
Put up, or shut up.

Ah no. After all the cloud may be near where you live.

Nuclear war is nothing to joke about. Grow up.

Unless you are Stanley Kubrick, in which case you get one free pass. Got to maintain those precious bodily fluids.

It would be a huge deal globally if tactical nuclear weapons were to be used in the war in Ukraine; I am guessing all stock markets would be closed for some time, there would a run of groceries, banks, and everything else. Not good by any measure. However, as for fallout, the world has dealt with ~ 520 above ground nuclear tests (and ~ 3x that number underground) from 1945 thru 1980 (f0r atmospheric tests), and the world did not end. That fact will be lost in the panic and $#!t storm that would follow their use.

Railways have been targets of attacks in war, since they and the means to attack them existed.

Everyday I hear we are shipping more and more weapons to the Ukraine. How do you think they get there, apparate? Yeah and meat is made in the back of the grocery store.

As for the mass graves. I remember when our government was telling us there were weapons of mass destruction in Iraq. As for mas graves, even if they are graves what tells you they are mass graves? Mass graves implies dumping in a hole with no dignity. We don’t know how these people are being buried, and they do have to be buried.

As for the ineptness of the FSB. The Cambridge Five, Aldrich Aimes, worst Edward Snowden. Snowden because he was a civilian who really should never have even had access to the information.

Yeah, the railway statement makes it sound like it’s oh so horrific and against the laws of war or something. It’s a perfectly legitimate target. As are “storage areas” if the enemy thinks there is war materiel there (and that’s a lot broader category than many modern westerners think).

Everyone beware of propaganda from both sides. Even if one side is so much more inept at it, evidently.

In war, there are frequently such large numbers of dead, that in order to get rid of the stench and to protect public health, the dead are buried in a mass grave. A mass grave is not evidence of crimes, it’s just an indication of a lot of people dead. This alone should not be shocking.

Perhaps this is a very clever triple game, masquerading as an inept double one.

The only thing we know for sure it that we don’t know anything for sure.

I’m not sure about that.

Ukraine has accused Russia of targeting the railways.

Well then perhaps the fraud Zelenskyy could take some of those millions of dollars the United States has given him and actually buy some weapons etc. to protect his fucking goddamn railroads? Because whining about it ain’t gonna do any good.

Did Ukraine target the fuel depots? Or is Russia doing this on purpose to make a case to attack Ukraine?

Zalenskyy targeted the fuel depots to give him more excuses to extort more money out of Pres. Dimbulb. You know, “Oh woe is us! Look what the evil Russians are doing! Send me more money!” kinda thing.

NATO has always been at war with Eurasia.

I spent my teens fighting and refighting Operation Barbarossa via Avalon Hill. Control of the rails was critical on the Eastern Front, and I doubt that many miles of interstate highways have been built in that part of the world since 1945.

I also love the “just out of the package fold line” on the swastika shirt.

I’m ready for a nap. Don’t set off any nukes while I’m dozing.

Inept mistake or silent form of protest/rebellion against Putin?

I did see someone suggest ‘signature unclear’ is a recognised ‘anonymous’ style way of signing things in Russia.

The three Sims however… nope, no excuses for that one.

The spies should have called Hillary Clinton for help. She gets it done.