“international community is being hypocritical and racist by being more sympathetic towards the Ukrainians because of their color, religion and race” 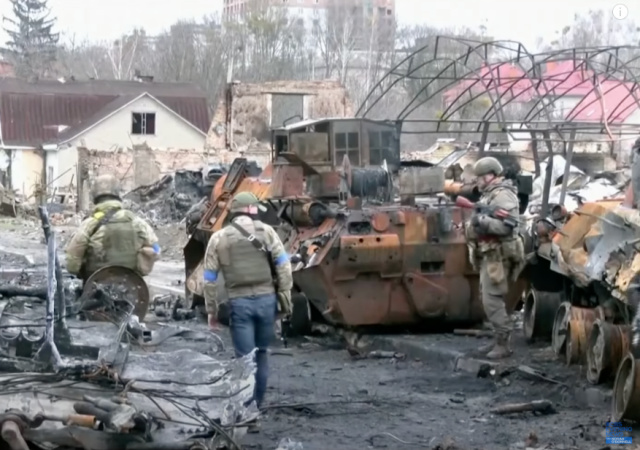 This is typical for the BDS movement. They often latch on to another cause and sometimes even take it over.

In a characteristic display of opportunism, the BDS movement in March concentrated its focus on the war in Ukraine. Responding to the rapid condemnation of Russia and the implementation of economic sanctions, leaders and members of the BDS movement, its representatives in Congress, and allied intellectuals, alleged a hypocritical double standard and demanded the same be done to Israel. This sentiment was echoed by the Palestinian Authority, which claimed the “international community is being hypocritical and racist by being more sympathetic towards the Ukrainians because of their color, religion and race.”

The BDS movement’s position was complicated by the response of far left allies, including the Democratic Socialists of America, which initially blamed NATO expansion for goading Russia to attack, and then moderated to a broad anti-war position. Palestinian Authority support for Russia went largely unnoticed. The fact that Ukrainian President Volodymyr Zelensky is Jewish and that Ukraine and Israel have positive relations is also a complication.

One strange illustration of the equation of Ukraine and “Palestine” came from model Gigi Hadid, who stated she was “pledging to donate my earnings from the Fall 2022 shows to aid those suffering from the war in Ukraine, as well as continuing to support those experiencing the same in Palestine.” Hadid, who is of Palestinian descent, has participated in anti-Israel protests.

In a social media posting, Vogue Magazine, which featured an interview with Hadid in March, initially removed her comments equating Ukrainians and Palestinians but restored them after criticism. In the interview, Hadid commented that she was hurt by allegations she had called for the destruction of Israel, adding, “I truly respect Judaism, and I think it’s a beautiful religion. … This is about a government system suppressing people.”

Right condemning Russian aggression because Putin is white (and so are most of his victims), rather than white Israelis who are just defending themselves, is racist!

It worries me that there are people who don’t see through this.

BDS seems like a disease pit of useless, maladjusted people looking for something or someone to blame for their shortcomings in life, but with a pseudo-intellectual veneer to it. I don’t understand why people waste their one shot on Earth dedicated to such pointless, hateful idiocy.