“We’re being forced on with a public safety problem here, a public health problem and then a humanitarian crisis. And this administration does nothing about it.” 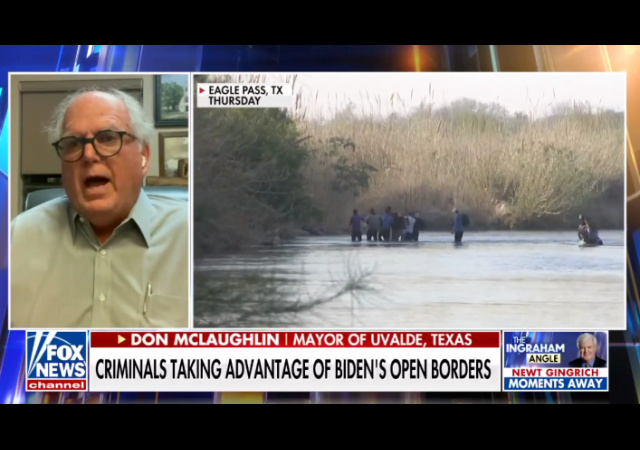 Uvalde Mayor Don McLaughlin went off on Biden’s administration for abandoning the border towns as they become overwhelmed with the border crisis.

McLaughlin told Laura Ingraham: “We’re being forced on with a public safety problem here, a public health problem and then a humanitarian crisis. And this administration does nothing about it. I mean, I had to take money, the county judge and I had to take money from our citizens and hire busses to haul these people from Uvalde because there’s no public transportation here.”

Uvalde is about 76 miles east of Ciudad Acuña, Mexico.

“[The Biden] administration is … out left field. You and I have to obey the rule of law, if we break the law, they’re going to come arrest us, we’re going to be punished. But yet we’re going to reward all these migrants that are coming across the border; and these should have been here and broke the law, now we’re going to drop the cases and let them run free? Are we going to do the same for American citizens on these same types of charges? Let them go free,” he said.

“They have greater rights than American citizens,” the mayor said.

Yes and no. Do you know who the *MOST* anti-illegal-immigrant (aka: Anti-Criminal Invader) in this country is? **LEGAL** Mexican immigrants. Those who came here the right way. Those folks, G-d Bless Them, absolutely ***HATE*** the illegals.

I wouldn’t say that, not when you have organizations like La Raza that are full of “legal” Mexican immigrants and basically cheerlead for the Mexican invasion and reconquest of the American Southwest.

The entire Country would have Abbott s. Back, but he’s a coward

DeSantis would have never stood for this

Some of my favorite youthful memories were hiking, fishing and tubing around Uvalde. It’s so sad that young people in Uvalde cannot walk in the woods just for fun.

I love visiting the Junction / Concan / Uvalde corridor. Superb RV camping at tiny, homey, clean RV parks, lots of shallow running water for your tootsies and your muttsies, and terrific people. Came damn close to moving there instead of Arizona, but preferred a drier climate.

So far, DeSantis IS standing for it. Illegals shipped to FL every night.

Oh, darn that Abbott. There he goes again.

Time for the REPUBLIC of Texas to act!
Send the Texas Rangers and the TX National Guard to deal with this emergency. Delegate some busess for the Rangers to transport the invaders to the border, and send them back.
Use the National Guard to keep the people from crossing. As I understand it, the middle of the river is the point at which America draws its border. Tow any boats back to the other side, unload them, and remove the boat. Put any swimmers on a raft, and tow it back. Remove the invaders, and take the raft back.
Make the issue hit the Supreme Court BEFORE that Jackson woman is seated.

Texas must elect a Governor who will do it. And, tell the Feds were to get off.
Remember, Texas entered the US as a state that kept it’s public lands. They Feds are operating on State or Private land. And, Texas has jurisdiction.

PS. that is why the land grant college AKA Texas A&M University was endowed with lands outside of the state.