“Shutting down their economies and schools was by far the biggest mistake governors and state officials made during COVID, particularly in blue states.”

The Committee to Unleash Prosperity released a study proving that red states like Florida handled the COVID pandemic the best while blue states failed.

The organization based the outcomes on deaths, economy, and education.

The bottom six are Illinois, California, New Mexico, New York, DC, and New Jersey. (I included six so I could mention Illinois, my home state.)

The study vindicates everything the right (especially Leslie!!) said about the pandemic, especially when it came to closing schools:

School closures may ultimately prove to be the most costly policy decision of the pandemic era in both economic and mortality terms. One study found that school closures at the end of the previous 2019-2020 school year are associated with 13.8 million years of life lost. An NIH analysis found that life expectancy for high school graduates is 4 to 6 years longer than high school dropouts. The OECD estimates that learning losses from pandemic era school closures could cause a 3% decline in lifetime earnings, and that a loss of just one third of a year of learning has a long-term economic impact of $14 trillion.

Unlike mortality or economic outcomes, closing public schools was entirely under the control of policymakers. Almost all private schools were open.

This ranking and map from the tracking company Burbio show the cumulative share of in-person instruction in each state, with part-time hybrid schedules counting at half weight.

Author Stephen Moore said, “Shutting down their economies and schools was by far the biggest mistake governors and state officials made during COVID, particularly in blue states.” 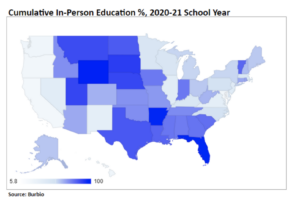 Shutdown and open states did not differ much when it came to mortality, proving that messing with people’s education and jobs did not help save lives. From The Wall Street Journal:

The study ranks Florida 28th in mortality, in the middle off the pack and about the same as California, which ranks 27th despite its far more stringent lockdowns and school closures. But Florida ranks third for the least education loss and 13th in economic performance. California ranks 47th overall because its shutdowns crushed the economy (40th) and in-person school (50th).

In other words, Florida did about average on mortality as other states, but it did far better in protecting its citizens from severe economic harm and its children from lost schooling. “The correlation between health and economy scores is essentially zero,” say the authors, “which suggests that states that withdrew the most from economic activity did not significantly improve health by doing so.”

The NBER working paper presents the data straight without policy conclusions, but here’s one of ours: The severe lockdown states suffered much more on overall social well-being in return for relatively little comparative benefit on health.

Instead, the states with lockdowns still have high unemployment rates. It will take a long time for those economies to recover, especially since a lot of businesses closed down forever.

The Editorial Board at WSJ summed it up perfectly: “Another lesson we’d draw that the authors don’t in their paper: Thank the U.S. Constitution for our federalist system of government. States were largely able to implement their own policies. The outcomes would have been much worse had Washington imposed a single national policy as dictated by the federal bureaucracy.”

I also hope people learned another lesson: Never give the government a millimeter. Never. They will always go as far as they can and do everything they can to hold onto that power.

“One study found that school closures at the end of the previous 2019-2020 school year are associated with 13.8 million years of life lost. An NIH analysis found that life expectancy for high school graduates is 4 to 6 years longer than high school dropouts.”

All that blood is on your hands, Democrats!

(As a gun owner, I’ve always wanted to say that.)

To be fair, aside from excess deaths at planned parent/hood facilities in several Democrat districts (e.g. Michigan, New York), Menegele Mandates, including: masks, carbon sequestration (e.g. climate stasis), general distribution of non-sterilizing vaccines, delayed, denied, stigmatized early, effective, safe, affordable (with or without insurance) treatments, the States, while not pathologically equal, were politically congruent (“=”) thanks to immigration and migration reform.

Another point about the WSJ observation about Federalism and the ability of States to make policy choices; those choices have consequences. The States who locked down and shuttered schools will see a sustained drop and difference in academic performance for the impacted Students.

These lockdown States can not be allowed to demand federal assistance for boondoggle programs to remediate the academic achievement deficiency they caused. That financing should be borne by the States who chose to impose long-term costs for no reason.

Maybe the schools could drop transgender and other creepy subjects and return to teaching things like SCIENCE?! And don’t skip the part about our immune systems this time! Every single germaphobe I’ve ever known was a chronically sick person. It’s okay to get dirty! Give your immune system something to practice on!

Re: Maybe the schools could drop transgender and other creepy subjects and return to teaching things like SCIENCE?!

Not a chance. NJ, which came in dead last in the study, is requiring that, starting next September, young public school kids get gender identity instruction.
https://nypost.com/2022/04/10/nj-gender-identity-lessons-prove-parents-were-right-to-worry/

My husband’s mother was a germaphobe as a result my brother-in-law got chicken pox at age 45 and my husband got it at 35. I can tell you nothing is worse than an adult with chicken pox (this was before the Vax).

What a surprise … freedom is better than tyranny. Did we really need a report to tell us this?

Lo.and behold the Trumpists write a study that make out that Republicans are amazing. Given the authors involved I’ll wait for peer review thanks.

Counterfactual arguments by assertion. It’s all you have.

In this particular case there are specific concerns about the authors, but clearly that’s not a good reason to dismiss out of hand. Thus ill await judgement as soon as I see a knowledgeable review of the document.

So lets be clear I haven’t made an argument for or against. Seems to me that you haven’t really understood that point. Its perfectly reasonable to highlight red flag such as political bias and then state well maybe we should wait for a decent review. Gushing requotes citing it as proof of how wonderful red state policies are isn’t critical.

You should try being critical sometime, might change your view.

You already showed your hand and tried to pass soft judgment with your snark, fatty.

Thanks for being your usual idiot self.

Having a hard time arguing against facts are you?

ahahaha, a study is not ‘fact’ the underlying facts have been weighted, so the question becomes has that been applied correctly

Now apply this to every propaganda piece you read and come into comment lines spouting as fact and disputing anything that activates your cognitive dissonance as “wrong”, “absurd”, or “untruthful”

Inslee succeeded famously. He emptied the jails completely under the guise of COVID.

Vermont is governed by republicans?

“Instead, the states with lockdowns still have high unemployment rates. It will take a long time for those economies to recover, especially since a lot of businesses closed down forever.’

And others left those states and moved where the climate – business and otherwise – is better. A lot of the employees of those companies are happily moving to states where the schools their kids attend won’t be run by “woke” imbeciles. Here in West Palm Beach we can’t BUILD houses, office towers and apartment/condo blocks fast enough to keep up with demand.