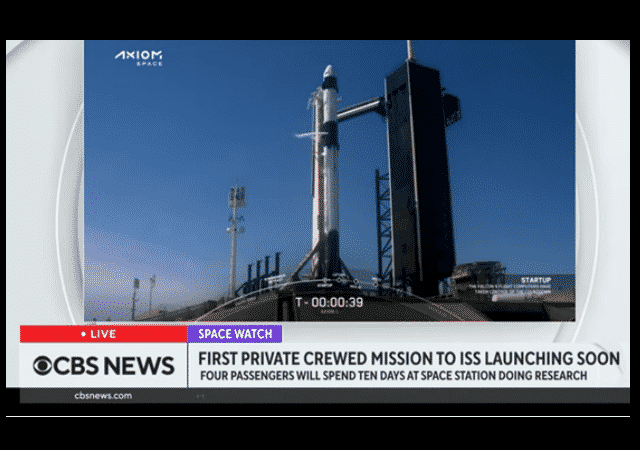 Elon Musk certainly has had a busy week.

While he was buying up a chunk of Twitter stock and joining its board of directors, his SpaceX firm was preparing to launch the first fully commercial mission to the International Space Station.

The mission launched successfully this Friday.

Using a previously flown first stage, the Falcon 9 thundered to life at 11:17 a.m. EDT and vaulted skyward from historic pad 39A at the Kennedy Space Center, climbing away to the northeast.

The mission represents the first SpaceX venture to the ISS not involving astronauts. The three passengers are paying $55 million apiece for the rocket ride and accommodations…all meals included (I wonder if Tang will be served).

The visitors’ tickets include access to all but the Russian portion of the space station — they’ll need permission from the three cosmonauts on board. Three Americans and a German also live up there.

Lopez-Alegria plans to avoid talking about politics and the war in Ukraine while he’s at the space station.

“I honestly think that it won’t be awkward. I mean maybe a tiny bit,” he said. He expects the “spirit of collaboration will shine through.”

The three passengers are hardly on a vacation. They are conducting a series of of health-related investigations studying the effects of spaceflight on the human body.

On behalf of Mayo Clinic, Connor is working on a project involving cardiac senescent cells, which are heart cells that have stopped dividing and are linked to age-related diseases. Researchers expect the data will shed light on the impact of space travel on these types of cells, and also on overall heart health.

Pathy will conduct experiments focused on chronic pain and sleep disturbances during space travel. The microgravity environment, along with exposure to radiation and isolation, are thought to amplify these symptoms.

The private researchers will be up there for about 10 days, then the next NASA astronaut team will head up.

Meanwhile, Musk was busy at the U.S. Air Force Academy.

Musk was the distinguished speaker for the Academy’s Ira C. Eaker Lecture in Arnold Hall.

In his comments, Musk shared his problem-solving philosophy and addressed the connection between military and commercial space interests.

“If we’re not blowing up engines, we’re not trying hard enough,” said Musk.

Musk said success in the space industry, particularly in the areas of space travel and colonization, relies on the “rapid and complete reusability,” of spacecraft.

Musk was greeted enthusiastically by the Cadet Wing, many of whom will go on to be officers in the U.S. Space Force.

Secretary of Transportation, Pete Buttigieg, is seeking an emergency injunction to put an end to these launches. He asserts that this form of transportation is under his sole auspices, and that he alone will determine what projectiles will be thrust into space with eventual entry into new worlds, especially Uranus.

Instead, he’s urging a focus on the yet to be discovered planet Phallus. Promoting child pornography is a way to get your children interested in Phallus – on Earth.

Child molesters and their enablers should be killed. There’s no middle ground. They are destroyers of lives.

So where does this $50m per passenger go? To thousands of SpaceX employees, vendors, etc… Each of which have homes and children and *jobs* due to this amazing successful endeavor. I might compare this to NASAs newest launch platform which is designed to chew through far more cash without producing any useful missions for years from now. Godspeed SpaceX. Hit ’em again.

First off the mouth, of course, would be Liz “Karl” Warren. It would be worth donating to a GoFundMe to buy her a ticket of her own… and then remind Musk what the indicator is that he’s “trying hard enough.”

I’m just happy to see that AFA cadets aren’t so lost to wokeness that they still applaud the combination of a can-do attitude with a record that backs it up.
Because heaven knows, they won’t see that anywhere else in their chain of command.

Severe blow to the Russians. The USA no longer needs their rockets.

Putin is making it clear that he considers Musk the main obstacle to Russian’s winning the space race in dominating Earth orbit. Xi is also very concerned because he had been assuming that Chinese dominance was a done deal. So those who believe Musk hates America, keep in mind who his domestic enemies are and why they hate him.

Musk is a man on a very big mission and is willing to spend his last dollar achieving his ambition of creating a human habitat on Mars. That is in sharp contrast to the other billionaires who seek global economic control and don’t care that 60% or more of the planet’s population won’t survive the “Big Reset”. We need to add that to the “Big Narrative” that Fuhrer Klaus Schwab is now pitching.

Do they offer a subscription plan where you can skip the commercials? 🙂