“I am not comfortable having one company with their own government and special privileges, when that company has pledged itself to attacking the parents in my state” 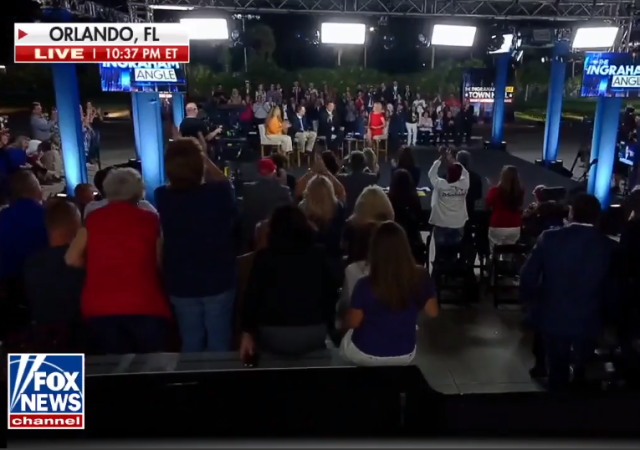 Florida Governor Ron DeSantis did a live event with Laura Ingraham of FOX News on Thursday night that covered a wide range of topics, including the state’s economy, their approach to COVID, and education.

The big soundbite of the night came when they discussed his recent clash with Disney over parental rights in education.

DeSantis blasts Disney execs’ attack on parents: ‘Walt Disney would not want that’

Florida Gov. Ron DeSantis pledged Thursday that Disney will live under the same laws as everybody else in Florida on the “The Ingraham Angle Town Hall” in Orlando, Florida.

“It just simply ends with them being treated the same as every other company in Florida,” DeSantis told Laura Ingraham. “They’re going to follow laws. They’re not going to have their own government. They’re going to pay their debts, pay their taxes.”…

DeSantis concluded by ripping into Disney’s response to the Parental Rights in Education bill, which drew a standing ovation from the crowd.

“I am not comfortable having one company with their own government and special privileges, when that company has pledged itself to attacking the parents in my state,” he said.

“When that company has very high up people talking about injecting pansexualism into programing for young kids, it’s wrong. Walt Disney would not want that. And so get back to the mission. Do what you did great. That’s why people love the company, and you’ve lost your way. Maybe this will be the wakeup call that they need to get back on track.”

Watch this clip to the end. The crowd applauds wildly and ends with a standing ovation:

Florida Gov. Ron DeSantis fires back at woke Disney, gets a standing ovation: "It's wrong. Walt Disney would not have wanted that … You've lost your way. Maybe this will be the wakeup call that they need to get back on track." pic.twitter.com/dEc9AyoatW

This issue is important for Republicans, and DeSantis clearly understands that.

He also talked about the recent appeal of Florida. From the Naples Daily News:

“We’ve led the nation in net in migration since COVID,” DeSantis said. “And if you look at the states that perform poorly by most metrics, they hemorrhage people.”

“And so the demand to live in Florida is more intense than it’s ever been in the history of our state,” he added. “And that’s just the reality.”

Many voters are facing the reality of higher costs for housing and other necessities, though, and DeSantis is sure to face continued questions about whether he’s doing enough to help them.

Asked about how he is appealing to Hispanics, DeSantis offered a revealing answer that provides insight on how he believes culture war issues play with this group.

The governor first noted his COVID-19 policies, saying his push to keep businesses open was good for everybody, but it was particularly good for our blue-collar workers, many of whom are Hispanic.”

Here’s more of the discussion on education:

If Trump doesn’t run in 2024, DeSantis is clearly the front-runner, for reasons which should be obvious to everyone.

“I am not comfortable having one company with their own government and special privileges, when that company has pledged itself to attacking the parents in my state”

Before Disney attacked parents, it was ok for them to have special privileges, Ron? This seems a bit hypocritical to me. I agree they shouldn’t have ALL the privileges they had, but they also brought a lot of money to the state tourism industry. It was good business sense when WDW began, but those privileges should have had a sunset clause in place years ago.

I do not support Disney, not at all. They disgust me.

Not sure what is so “hypocritical” as you blame “Ron”. To quickly educate you this “Corporate Welfare” was created in 1967 (before Ron was born) to get and keep Disney here in the Sunshine State. In 1968, the voters here approved the state constitution which has a section that any “independent district” would have to reestablish, re-ratify or otherwise reconstitute their “district”. Disney, along with five remaining districts have not done so. So, now it is on all of them, including Disney to follow our state Constitution. Other than that, time to chuck this after 55 years of special treatment.

Yes, I understand that, definitely.
My point was this: he has been governor long enough to know what the situation is with Disney. Why is it only NOW that he is against it?
I fully agree, time to stop with the special treatment.

Let’s see, DeSantis had to deal with anti rioting measures, teacher pay, school security, Covid crap, CRT, Anti-WOKE legislation, strengthening our voting, taking care of a wife dealing with breast cancer, medical marijuana, hurricanes, destruction from hurricanes, high insurance rates, etc. and with a legislature that only meets 60 days a year. Maybe he did not do it on your time frame but the issues I mentioned (there are others that I missed) are DAMN more important to us here in Florida then Disney losing their “Corporate Welfare”! If this is your issue against DeSantis then vote for Chain Gang Charlie. If you don’t live here in Florida, please sit down and be quiet.

I can’t tell if you are trolling or not.

If ANY governor that was left, right, up, down came in with a plan to remove Disney sponsorship upon entering office they would have been recalled post haste.

This is something that has needed to happen for a long time, but Disney needed to do something to lose the support of the people. They did that. Hollywood is just lucky they are in lefty land.

Nope, not trolling! I’ve been here since the site began.

I also agree with you, any politician would be tossed after one term.

It is just the nuance of his words, that is all. He isn’t comfortable “now”, it struck me wrong.

Ron was Rockin the Raffers!

Disney is attempting to hid behind the 1st Amendment which has been deemed in our courts to allow for the treatment of corporations as “persons”. So they are just exercising their right to express their opinion and should not be punished by having a right (which is actually a privilege which only they have been granted) taken away.

DeSantis didn’t mention this, possibly for legal reasons (too early), but expressing your opinion does not cancel out voters’ votes. Disney doesn’t get a vote. It’s a blatantly clear example of undue influence by threatening retaliation to citizens and employees if they don’t get their way.

One other point, this issue is not only a winner with Republicans but across the board. We should be reporting it that way so we don’t make it a Republican issue. The Mama Bears are NOT partisan. There is enormous push back here in CA, often the first, and it is increasingly organized.

It has been that way for quite a while but the Republican Party itself decided to abandon CA after the Bush crowd rigged the nomination of Schwarzenegger in the recall election. And they are even worse today. This is grassroots in CA. Let’s not make it a partisan cause. We are already winning.

And so the Trump/DeSantis bulldozer gains momentum. Trump is pushing with his nominations challenging entrenched squishes in Congress while DeSantis is winning in schools and with Disney and Twitter, bringing to everyone’s attention to the Achilles heel for corporations opting to embrace ESG over shareholder rights. McDonalds and a few other corporations are taking up that fight. We are gaining momentum in very big battles where the tide is already turning.

As liberals would say, he hasn’t shut down their speech. He has merely pointed out that there can be consequences….and state sponsorship comes with a condition that you can’t also sponsor propaganda.

Something that many of here in Florida are noticing is that the DeSantis campaign some 6 months ago started to push the Family First Agenda. The reasons are numerous. They would include Casey having breast cancer which put more of a focus on the family dynamic that millions can identify. The other issue for the DeSantis campaign is that his eventual opponent would either be Charlie Crist who has always been rumored to being gay and yet have a daughter out of wedlock many years ago or Nikki Fried, the current Agriculture Commissioner who has had a nasty relationship of allegations of physical abuse. As for Disney, they stupidly and single-handedly stepped into it with their opposition to a bill that is pro parents and pro family. The governor’s team brilliantly have cast Disney as anti Family and anti Parent and thus “outing” the democrats here as being in their corner. In essence, Disney gave Ron DeSantis a HUGE in kind contribution.

I have to admit to being a little concerned when governments use their power to retaliate against the opposition. Kind of like Obama weaponizing the IRS against conservatives. But I do have to say that Disney’s Special Privledges have been in effect for far too long. Politics aside, it’s been long since time to reign them in.

Yes, but we do have a state constitution that Disney did not adhere to. After 55 years, very few would argue that Disney still should have Special Tax breaks.

Is this legal? Yes, probably. The 1968 Florida Constitution holds that:

Since John Dewey, the left has assumed those kids belong to them. You’re just the incubator.

The war over shareholder rights vs “stakeholder” rights is on in earnest. The “Big Reset” is already floundering.

Trump sure could use a few of DeSantis’s political and personal qualities.

I agree, but it’s still Trumps to lose. My dream
Team Trump/DeSantis with Trump
Stepping down after year 2 so we get 10 years of DeSantis!

DeSantis for president. I voted for Trump twice. If the Republicans want to ensure a Democrat president from 2024-2028, then nominate Trump in 2024. He cannot win. Had he spent the last two years of his administration acting presidential instead of acting like a 15 year old ass, he would have been re-elected in 2020. He ruined any chance of being president again with his awful behavior, especially after November, 2020. His best day was November 2016 when 53% of Americans voted against him. He will never do better than that 47% and likely much worse. DeSantis is far better, and I hope he runs.

I think most people have learned that a couple “mean tweets” may not be too bad considering the alternative democrat lunacy. Name one non lunatic democrat who could challenge Trump. Biden? Kamala? Hillary?

Since you asked … Tulsi Gabbard.

I will vote for President Trump or Governor DeSantis. I will not vote for Pence or the fat guy from New Jersey or pretty much any other RINO. But if it is a RINO vs Tulsi, she gets my vote. And I say that as a proud conservative and Trump supporter.

I agree. Tulsi would get my vote over a RINO.

So, Brandon subscribes to Terry McCauliffe’s position in VA, that parents have no say in their children’s education. Republicans should do to Brandon what then candidate Glen Youngkin (now governor) did to McCauliffe. Advertise that far and loud so that everyone is aware of where DemoncRats stand.