Report: Psaki Joining MSNBC After She Leaves the White House in May

Report: Psaki Joining MSNBC After She Leaves the White House in May

She hasn’t signed any contracts because of government rules. 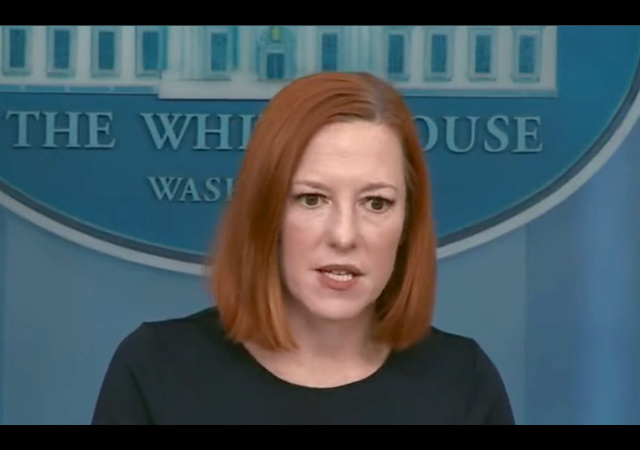 Axios reported that Press Secretary Jen Psaki will join leftist-haven MSNBC when she leaves the White House in May:

Why it matters: It’s been speculated for weeks that Psaki would leave the White House for a TV gig. White House communications staffers often negotiate TV jobs once they leave an administration.

Details: Psaki has been in close consultation with the White House counsel’s office about her departure, according to two sources familiar with the plans. She’s been treading carefully on the ethics and legal aspects of her plans.

Psaki said last year she planned to step down but remained coy when asked if she’d go to a network news station.

Sources told Axios Psaki has told a few people in the White House about her plans but nothing formal to her press team.

I wonder who will take over Rachel Maddow’s 9 PM ET spot on MSNBC since Psaki won’t get it. Then again, things could change.

Psaki joins Symone Sanders, former advisor and spokeswoman to Kamala Harris. She has a shot that will air on the MSNBC network on the weekends but stream on on Peack on Monday and Tuesday.

Something about rats and sinking ships comes to mind.

Hallelujah. She is a nauseating presence. She’ll be on MSNBC where barely anyone will watch her.

Hopefully, the likes of this blog won’t be quoting her b.s. every day.

“If not for the courage of the fearless crew, the Minnow would be lost…”

She lies so effortlessly. She’ll fit right in. No on-the-job training required.

So we’ll be even less likely to see her ever again. Pity MSNBC wasn’t around for Pierre Salinger, Bill Moyers, et al.

She’s rather incompetent. MSNBC is the perfect place for her. Either that or CNN+

I wonder if she will wear her pink ushanka hat emblazoned with the hammer and sickle?

Hardly a surprise. For years now under D and R – the rotating door for political positions has been occupied by media people. From media to the WH comms in various positions and back out to media. Or one of those cycles at least.

But even worse is how all the bureaucrats have their own revolving door. From industry to government salaried jobs for oversight or policy making and then back into the door and back out to industry.

It’s the fertizer for the swamp.

Of course. A clown gets in the clown car.

Psaki: Always rising to her highest level of incompetence!

Baghdad Barbie Psaki has proved that she’s a varsity class liar. And now she’s quitting to join a jay vee team? What would Obama say?

What an insult to Barbie. She looks more like Chuckie.

So this is where she gets the bribe payoff for her time lying in the hot seat. Normally they take care of that with a multi-million dollar book advance from one of the major publishers, but I suppose not even libraries would buy the (censored) she’s selling. MSNBC is the perfect place for her to nest for the midterms, telling us all how perfect the current administration is while badmouthing any Republican who looks like they are succeeding.

She’s got the experience after all.

The other Democrat weez was a well funded go fund me account.

Cool. I can’t wait to continue not watching her.

Good, I’ll be even less likely to see the ugly bitch when she’s there.

I’m so old, I remember when humiliated advisors would “join a think tank.”
Of course, back then, they could think.

She has a very stressful job at the White House — she’s expected to tell the truth at least once a month.

At BSNBC, nobody expects truth, ever. A much easier job.

If she tells the truth that much, she does it deep in the presidential bunker.

Although she ocassionally skipped a month. Sometimes two. Or three.

Forget her political leanings and demonstrated history of lying. Her voice–nails on a chalkboard. Nope.

And just when you think she’s done she circles back.

I applaud her moving to msndc. I’ll never have to see her lying, feckless face again. Even my wife uses the “C” word when referencing this piece of sh&t human debris. Finger nails on a blackboard doesn’t come close to the revulsion she generates on a daily basis.

For anyone that had lingering doubts about her truthfulness and integrity, this move to MSNBC should completely resolve any such issues.

I can’t wait to miss Peppermint Patti even more. If only she’d take our Charlie Brown of a president with her.

New Term for the day:

Seriously, WHO would watch her program??