“This is all part of our effort as individuals come into the United States and individuals who are entering who will proceed to immigration proceedings to monitor and to track where they are.” 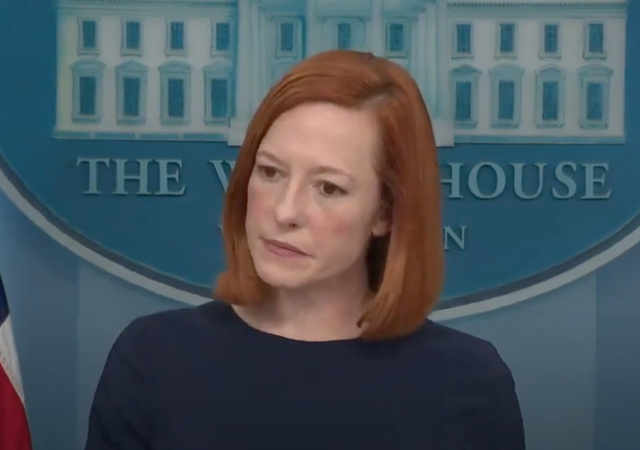 Jen Psaki confirmed the administration gives phones to migrants released into America so officials can track them.

We need to take steps to ensure that we know where individuals are, we can track them, we can check in with them. The alternatives to detention programs, which is what we utilize, is three unique forms of technology to monitor participants enrolled in the program. Telephonic, which is one of them, which uses a participant’s voice to create a biometric voice print during the enrollment process. When the participant has a check-in call, their voice is compared to the voiceprint. SmartLink, which is another option, enables participant monitoring via smartphone or tablet using facial matching technology to establish identity. And Global Positioning System monitoring which monitors a participant’s location and movement history using satellite technology through an ankle bracelet.

This is all part of our effort as individuals come into the United States and individuals who are entering who will proceed to immigration proceedings to monitor and to track where they are.

Doocy asked Psaki if they had any concerns about people throwing away the phones or giving them away to others. Psaki answered:

Our concern is ensuring individuals who irregular migrate to the United States proceed through our process of, of course, you know, being monitored but also participating in hearings to determine whether or not they will be able to stay.

I will note that nearly 80% of noncitizens released at the border from DHS custody under prosecutorial discretion have either received a notice to appear or are still within their window to report. So actually the vast, vast majority of people are appearing, and we have these monitors and monitoring systems in order to do that effectively.

Fox News’ Peter Doocy asked the White House about reports of migrants receiving smart phones from the Biden admin — Jen Psaki explains how technology is used at the border pic.twitter.com/GznvFJLDmt

Psaki’s response confirms previous reporting and pictures from the border.

Sources tell me w/ parole releases, the migrants are asked to turn themselves into ICE in a city of their choice. I’m told many of them are given these phones by the government to track them and allow them to communicate w/ ICE, but there’s no way to stop them from being tossed. pic.twitter.com/tAogWloQgy

How did we get from the Founders to these F-ing clowns?

Sad, but true. The women human evolution has produced to be on top are Hillary Clinton (a sociopath and a liar) through the likes of this sociopathic liar Psaki.

We now have defined the ultimate intersectional peak of victimhood… no… not the illegal immigrants… citizens of the USA… but who cares?

And, before that, Bush phones.

They’re still ‘obama’ phones. This is his third term. If anyone doesn’t believe that, they’re going to hear a loud pop when they pull their head from out of their behind.

“The alternatives to detention programs, which is what we utilize, is three unique forms of technology…”

Does anyone in this administration speak fucking english?

No. No they don’t. They are lying from the get go, so it’s all about Newspeak and obfuscation.

When is this jerk leaving for MSNBC?

Sure they do, sure.
Have they handed out weapons to track those too?

“ Have they handed out weapons to track those too?‘

Was’t that Fast and Furious?

No offense we to Psaki but if 80% do then 20% do not. Where we have an average of 100K each month that leaves 20K more folks running loose every month. Add in gottaways of even 50K per month none of whom are tracked and there is near parity between the groups; 80K who stay in the system and 70K who are not. That’s assuming the percentage quoted actually hold up over time.

The d/prog are making another unforced error in getting out of step with the mainstream to appease a very vocal minority percentage of their base. Even normal d are beginning to understand how big a long term problem this is. Much less short term spikes in crime and demand for services like education in their communities.

Her phrasing was also such that 80% had been tracked effectively enough to receive a “notice to appear”, not necessarily that they had actually appeared at those rates.

And actually I misread the first time 80% have “received their notice to appear OR are still within their window to check in”….so not even 80% have received that notice. Some will inevitably not ever check in.

She said that 80% have received a notice to appear or are within their window to report. That could be true, even if none appear. Not to mention the other 20%.

Of course they handed out phones to track them. They need to know where they are so they can register them to cast fraudulent votes in their names, right?

Our ‘government’ is no only alien to us – it’s nothing more than organized crime. And we ain’t ‘made’ people.

How many minutes do they get, and who pays the monthly bill?

I would like to know the amount of money we spend on each illegal alien, and to see that published.

It used to be called “foreign aid” to improve their countries and their lives there….but that makes illegal voting for Democrats more difficult.

and yeah the fool bush did it too but not to the extent obama and biden did.
its like the difference between gunwalker (where tracking devices failed) and fast and furious where no tracking devices purposely implemented.

Shorter Psaki: “We need to ensure our shipments of Fentanyl come across the border on schedule.”

Does any9ne have any questions yet about who these a-holes are working for? It ain’t the 81 million (yeah, right) who voted for basement Joe. Look at whose payroll the Biden crime family is on.

If you can track them, you can also turn them out to vote for democrats, which was sort of the whole point behind letting them in. Cheers –