Sen Grassley: “We have people with the Biden name, dealing with Chinese business people that have a relationship to the Communist Party.” 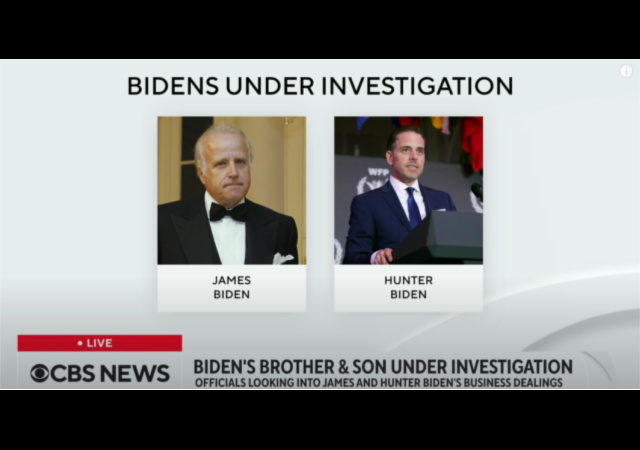 I guess the MSM picking up investigations into the Biden family means something will go down soon.

CBS News found out that U.S. banks flagged over 150 transactions involving Hunter Biden and James Biden, the president’s brother. The banks found them “concerning” and wanted to review them deeper.

The information handed over to the network did not reveal the outcome of the reviews.

CBS News didn’t waste an opportunity to take a dig at President Donald Trump: “In 2019, a bank handling business for members of the Trump family flagged multiple transactions for similar reviews, according to reports in The New York Times. A spokeswoman for the Trump Organization said at the time that company officials were not aware of the flagged transactions.”

How that is relevant to the Bidens I do not know.

Grassley and Sen. Ron Johnson (R-WI) released a report in September 2020 alleging that “Hunter, James, and James’s wife Sara tapped into a line of credit Hunter set up with a Chinese business executive to purchase more than $100,000 in airline tickets, hotels and restaurants.”

Last week, Grassley exposed James and his bank records on the Senate floor that show James and Hunter “linked up with companies connected to the communist regime to assist them with finding projects for global and domestic infrastructure and energy.”

The new records revealed “the 2017 application for that $99,000 line of credit bearing the signatures of Hunter Biden and the Chinese executive.”

“We have people with the Biden name, dealing with Chinese business people that have a relationship to the Communist Party,” Senator Chuck Grassley, the ranking Republican on the Judiciary Committee, told CBS News senior investigative correspondent Catherine Herridge. “I think James Biden was very much a part of this.”

Bank records released by Republican senators this week indicate James Biden’s company, the Lion Hall Group, received payments from a Chinese-financed consulting group in 2018, before his brother Joe announced he was running for president. Grassley says that same year James Biden and the president’s son, Hunter, received monthly retainers totaling $165,000 — $100,000 to Hunter and $65,000 to James.

Grassley said his team obtained the records directly from the bank where the consulting group did business. He has spent three years investigating and described James and Hunter Biden’s business dealings as “very concerning.”

The plot thickens. Too bad they didn’t allow reporting on any of this before the pedophile got illegitimately placed in the office.

HenyBowman I like your ‘Twilight Zone” analogy . Unfortunately it captures the situation in DC perfectly. I can not see a way to change it because the lifers run the show.

And it’s all our fault. We need to fix this by “voting harder,” like Danny recommends. Because voting will change everything.

Correct. And if something happens to President Ice Cream Cone as a result of this, which I doubt, it won’t be because the left has seen the light. It will be to get rid of this human speed bump. Can’t stop The Cause. Anyone and everyone is expendable. The left is scary as hell.

It appears that Jim and Hunter Biden might just need to (GASP!) get legitamate jobs…after their release from Club Fed.

IMO, this sudden amount of modest media interest is basically front running. Get the story out in dribs and drabs while the Ukraine story is taking the air out of the room. Then later on any questions will be rebuffed with a simple ‘that’s old news, we addressed that issue months ago’. It might work, though the angle that this a Hunter and James Biden story that doesn’t include Joe offers another way to deflect.

Nothing will be done.

I’ve always had the suspicion that Jim was the main player behind all of this. He could stay in the shadows while Hunter got all the attention, Hunter was the family screw up who was an easy fall guy while Jim knew exactly what strings to pull and when to pull them.

He sure does look more than a bit Vito Corleonesque in that shot, doesn’t he?

The banks that reported “concerning” transactions will be audited and those responsible for not covering them up will be jailed.

Nothing will really happen. Joe has dementia and therefore cannot be prosecuted. He will pardon Hunter and James on the way out. He will seclude in Delaware and probably not be seen again. The MSM and Democrats will quote Hillary “What difference, at this point, does it make?”
Republicans will say “Thank you sir may I have another?”
Wash rinse repeat.

The ties to the Chinese communist party are pretty much irrelevant: Do business in China and you’re doing business with CCP.

The nature of that business, the reason for the payments and the utter miserable lack of business experience or acumen that might justify them are however screaming out for investigation.

Then there’s the rule that only Republicans are required to follow: The mere appearance of impropriety must be avoided. Any Republican who violates this rule is politically (if not legally) punished as severely as if an actual ethics violation was involved. Dems, not so much. They get a pass. E.g., Nancy Pelosi.