“He will be charged by federal prosecutors in Brooklyn with terror-related offenses, according to a high-ranking NYPD source.” 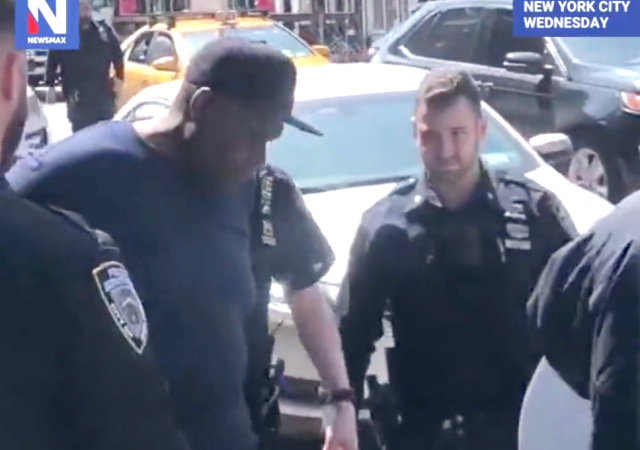 The NYPD arrested Frank James, 63, in connection with the Brooklyn subway shooting. He allegedly shot 10 people and injured 19. From The New York Post:

He will be charged by federal prosecutors in Brooklyn with terror-related offenses, according to a high-ranking NYPD source.

Frank James, 62, is the prime suspect in Tuesday’s attack and had been on the lam for more than 24 hours after he allegedly disguised himself as a construction worker and fired 33 rounds onboard a Manhattan-bound N train in Sunset Park during the early-morning rush.

Early Wednesday, police received a Crime Stoppers tip from someone who claimed they spotted James at a McDonald’s at East 6th Street and First Avenue in the East Village, law enforcement sources said. When cops arrived, he was no longer there, but they soon caught up to him a few blocks away at St. Mark’s Place and First Avenue, the sources said.

James allegedly didn’t resist when police arrested him and he’s currently in custody at the 9th Precinct.

This is Zach Tathhan. He works at a coffee shop on First Avenue where Frank James was arrested. He says he’s the one who spotted James and called police. @NY1 pic.twitter.com/OR2kF94CG7

He turned himself in. Probably will collect the 25,000 and post bond

So I see. Interestingly, the first reports I saw claimed that someone had recognized him and called the police. This illustrates the need for the 72 Hour Rule–almost any detail of a breaking news report may turn out to be inaccurate or just plain wrong. And that’s without Dan Rathers working hard to peddle actual lies.

Too bad he wasn’t room temperature.

Maybe not. Assume a trial during which his hate-whitey attitudes come out.

Maybe we’ll learn that we don’t have a race problem in this country. Rather, we have a problem race. Or stated more accurately, a black culture problem which breeds adverse consequences for all involved.

Given most of the anti-white racism I see online from America is posted and shared by people that aren’t ‘black’ I think your conclusions are flawed.

Not the FBI that had him under surveillance for years and decided to just not bother with him anymore despite his history of violent behavior and open threats.

What were they supposed to do, follow him around full time and wait for him to do something?!

The FBI does not have nearly enough agents to keep all these extremists under surveillance. I doubt that even 100 times more agents would not be enough.
I could complain about the folly of allowing immigration of large numbers of people who are likely either commit acts of terrorism or sympathize with those who do, but the sad truth is that we have lots of native-born loonies too, this shooter being only one.

They seem to have plenty enough agents to create new extremists.

I wonder who was stupid enough to downvote my comment.

The Nation of Islam alone has about 50,000 members.

If we scrapped our national security state and invested in local police (i.e. NYPD) we would take a major bite out of crime, including terror attacks like this one the states ability to fear monger would diminish dramatically, you would be able to voice opposition to CRT and radical gender theory/transgenderism without being on a secret government list, our elections would be much freer.

Lets disband them and just send money direct to police departments as grants they could use to enable them to have more cops on the ground. All the fascists in the world under Merrick Garland hunting for anyone who was invited into the capitol building Jan 6th wouldn’t have stopped this terror attack, one cop with a pistol in the subway however would.

They’d use it to buy more APCs with.

Policing needs to be reformed from top to bottom in the West. Your local police department is no better, their abuses just don’t have the same scope.

The APCs are themselves grants in the first place.

The great thing about a federal grant is you could attach strings to it, to prevent exactly that.

If we let the NYPD do its job and thugs like this were prosecuted and sentenced to long jail terms and NY was a “constitutional carry” state, NYC would be a lot safer.

I am not crossing my fingers. The present court is not about to decide in favor of the 2nd Amendment.

I’m actually more sanguine about this than you are (mark today on your calendar).

I think it is. Barrett’s past decisions show that she is pro 2nd Amendment and Kavanaugh and Thomas not too long ago publicly asked for a new case because it’s been too long since Heller, with questions unanswered. You don’t do that to shoot down Heller. Alito and Gorsuch are solid. There was nothing during oral arguments that made me question any of the above five justices. Kavanaugh was especially good. Roberts is the only goofball tossup and he’s not necessary, although he made some good points during the government’s turn.

Long term jail, but inside a wooden box, six feet under.

looks like good police work. After they found where he was from, they found how he got to New York, then they just had to stake out the uhaul. There are not that many uhauls parked on the streets.

Why do you think they did that, or should have done it? There was no reason to suppose he would return to it, especially since he dropped the key on the train.

Note that he didn’t return to it in the 24 hours or so that he was out and about. Would he have done so eventually? Who knows?

He turned himself in

Not only did they not stake out the U-Haul (because there was no reason to do so), it turns out they didn’t catch him at all. He called them and told them where to find him.

What are the odds BLM bails him out?

I think BLM should buy him a $6 Million mansion to support his fight against racism.

I think NYC should buy him an 8×10 cell to rot in for the rest of his miserable life.

No doubt BLM will get him the best lawyer money can buy. That may be more than $6 Million.

None. They don’t want their name associated with him. The fewer people know that he is one of them, the happier they will be.

The election of Barack Hussein Obama as president (whoever he is, and whether he was actually ‘elected’) is the worst thing to ever happen to America (the second worst was the election of Bill Clinton).

Obama’s hate rhetoric is directly responsible for the likes of this guy.

No, it isn’t. This guy and his likes were like that long before they ever heard of 0bama. It’s more like they’re responsible for him.

He has a long criminal history that predates Obama. I think he wants to go to prison; knows he won’t be executed and will have big time cred on the cell block. No work, no responsibilities, and hanging with the homies playing board games all day. May be an improvement over the life he had on the outside and don’t forget the free food.

Why else would he turn himself in? I heard he left plenty of personal evidence at the scene also.

More accurate to say that Obama and his ilk bear some responsibility for these attacks, because of their rhetoric inciting hatred and a sense of victimhood. It’s fair to say that there would be fewer such attacks if the Obamas, Sharptons, etc had chosen to do the opposite of what they did.

Sharpton, yes. Farrakhan, yes. But 0bama has not engaged in that sort of rhetoric, or had that sort of influence. He has merely reflected a worldview heavily influenced by those people, as well as by his communist upbringing. He is a disciple of Pfelger and Wright, not a colleague, let alone a mentor. They are responsible for him, not he for them.

What plant’s news have you been watching for the past decade?

I agree that Obama and Sharpton are very different.
However, Obama has incited racial paranoia and therefore should be condemned as well. Plenty of examples of evil rhetoric from Obama’s mouth, and thus Obama does bear some responsibility.

I James were a white guy, there would be protests everywhere and cries of racism/white supremacy.

But a black guy (even if he is mentally unhinged)?? Sound of crickets.

Out of the news in a day…

If James were a white guy, there would be protests everywhere and cries of racism/white supremacy.

But a black guy (even if he is mentally unhinged)?? Sound of crickets.

Word is that Stacey Abrams will marry him while he’s in jail. Being his new wife, she’ll get all his clothing, which will fit her.

He called the police on himself because he wanted lots of witnesses and did not get killed for being armed and dangerous.