Meet some of our newest team members

Meet some of our newest team members 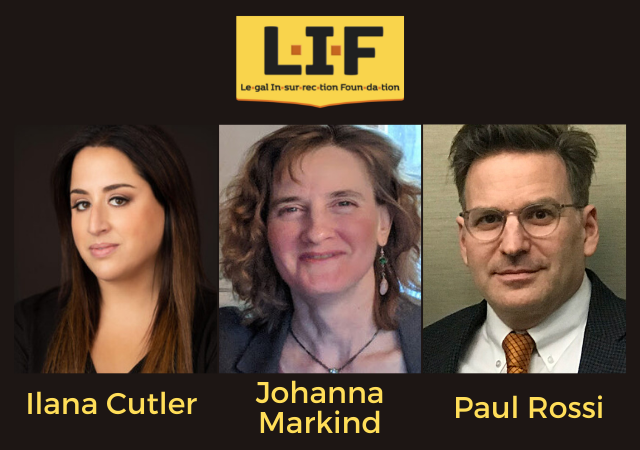 It’s been awhile since I’ve made any introductions, and now seems as good a time as any. You may have seen their names on the blog, but I’d like to formally introduce you to three of our newest Legal Insurrection Foundation teammates. These rockstars cover a variety of issues, all different, and have joined us over the course of the past few months.

So, please join me in welcoming (much too late) Ilana, Johanna, and Paul. In no particular order:

Her official bio: Ilana Cutler is a 2004 graduate of the University of Michigan Law School, where she was Note Editor for the Michigan Journal of Law Reform. She also holds a B.A. in Political Science (magna cum laude, 2002) and Masters in Political Management (valedictorian, 2011) from George Washington University. After graduating law school, Ilana worked for several years at a major New York City law firm, representing clients in the health care, financial, and energy sectors. Subsequently, she worked at a global litigation services company. Ilana lives in Maryland with her two daughters, and is an active volunteer at their schools and in the community.

Ilana is spirited, tenacious, and I would never want to have to fight her in court or elsewhere. She mans the FOIA front, investigates various things, some we publish, many we don’t (we do much work behind the scenes for which we desire no credit), and is terrible with technology. But she’s hilarious, so we look past her technological ineptitudes.

Her official bio: Johanna Markind is an attorney, researcher, and writer, who has worked for the U.S. Department of Justice as well as in private practice. She has been published in The Wall Street Journal, The Hill, Middle East Quarterly, Tower Magazine, The Forward, and elsewhere about criminal justice reform, hate crimes, extremist radicalism, campus radicalism, free speech, anti-Semitism, and Israel. She holds a BA from Bryn Mawr College and a JD from The University of North Carolina at Chapel Hill School of Law.

Johanna is wonderfully kind, thoughtful, deliberate, and knows many things about many things. I always walk away having learned something new from her, even in casual conversation. She researches a variety of topics, all listed above. If you’ve read her work, you know she’s a great writer.

His official bio: Paul Rossi is an educator, researcher, and writer. His essay I Refuse to Stand by While My Students are Indoctrinated, described the impact of applied Critical Race Theory on students at Grace Church School, where he taught from 2012 to 2021. Since his departure from the school, Paul has focused his research on ideological programming in K-12 private schools, and shared his experiences and expertise at conferences and in national media. He consults with several parent organizations such as Parents Defending Ed, The Foundation Against Intolerance and Racism, Moms for Liberty, and Parents Unite, and he serves on the advisory board of the Educational Liberty Alliance. Paul holds a BA in French Literature from Cornell and an MA in Educational Psychology from Hunter College.

Before Paul joined us at LIF, he participated in a panel discussing the pervasiveness of critical race training, among other things. Paul is measured, admirably balanced, and passionate about exposing the cultural rot destroying some of the country’s most prestigious private schools.

Truly an honor to work with the entire LIF team, including our newest additions.

We work hard and are deeply committed to ALL the freedom, but especially the onslaught of attacks in the academic arena. We also have the world’s best boss in Professor Jacobson, who I am not sucking up to, but who I think we can all agree has done tremendous work taking a tiny blog and turning it into a powerhouse of an organization.

Welcome to one and all!

Welcome aboard and keep up the great work!

These high-caliber additions to LI greatly transcend the idea of grumpy citizens in pajamas criticizing their betters from a mere ‘blog’. I’m delighted.

After reading Paul Rossi’s “Inside the Woke Indoctrination Machine” in February it was clear to me that what the general public need for ‘news’ is more of Rossi and similar observers, and a lot less of the pre-programmed groupthink of the MSM.

Welcome the three of you!

I continue to be impressed with the size of and the talent of the LI members. LI is frequently cited and linked in conservative chat and posting blogs and its general presence in conservative thought is a very strong and getting larger.

Looking forward to many threads from them, it’s a great readership here.

The work you have been doing is impressive Mr. Rossi. I am glad you will be a full presence. Glad to see you full time as well Ms. Cutler and Ms. Markind.

Thanks Lili, Johanna and Paul for joining the great LI crew.

Welcome to all — I look forward to reading your contributions!