If Macron wins he will likely not demolish Le Pen as he did in 2017. Le Pen is such a threat against Macron this year that the other candidates, except one, begged their supporters not to vote for her. 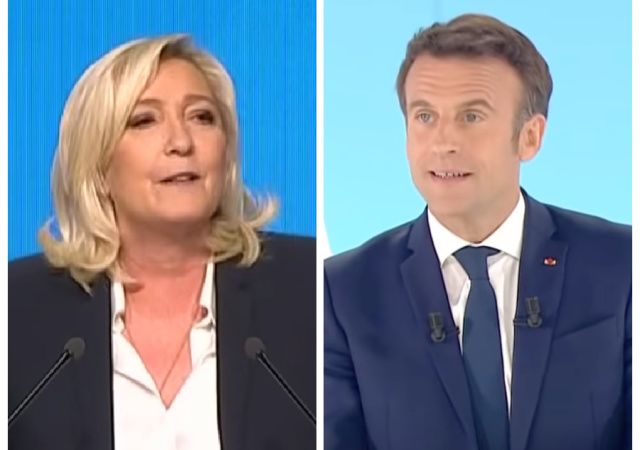 The French will choose between Marine Le Pen and current President Emmanuel Macron in the presidential run-off, just as they did in 2017. The run-off will take place in two weeks on April 24.

Macron topped the first-round contest, winning 27.6 percent of the vote, according to Ipsos/Sopra Steria estimates late Sunday evening, ahead of Le Pen’s 23 percent score. Far-left candidate Jean-Luc Mélenchon rode a late surge – and an appeal for leftists to vote tactically – to 22.2 percent, narrowly falling short of a place in the final.

The rest of the field finished way behind, a single-digit peloton led by hardline pundit-turned-politician Éric Zemmour on 7.2 percent. The mainstream parties that had traded tenancies at the Élysée Palace for decades until Macron came to power each fell to disastrous defeat; Les Républicains candidate Valérie Pécresse scored 4.8 percent for fourth place, while Socialist candidate Anne Hidalgo’s 1.7 percent put her in a humiliating 10th.

Voter turnout was remarkably low. Some 26 percent of registered voters elected to stay home for the first-round, four points up on 2017 and uncomfortably close to the 2002 record of 28.4 percent.

France24 found that one in three voters backed the far-right:

At 33%, the far right’s combined vote is the highest yet – giving Le Pen a stronger springboard than she enjoyed in 2017. On top of her projected 23%, Le Pen can count on the support of voters who backed Eric Zemmour (7.2%) and Nicolas Dupont-Aignan (2.1%), both of whom have urged supporters to vote out Macron.

But the far-right candidate will have to reach out to other voters too, including mainstream conservatives and anti-establishment voters on the left who want to see an end to the Macron presidency.

Le Pen gained much support by concentrating on inflation and living crisis issues the voters cared about.

The French criticized Macron for not running on those issues. He promised “he would ‘do everything’ to convince voters that he had the solution to high prices” after this first round.

In fact, Le Pen is such a threat to Macron that everyone but one candidate begged voters to vote to stop her. The Guardian reported:

All major candidates, except for the far-right TV pundit Éric Zemmour, immediately called for French people to vote tactically to keep out Le Pen in the second round.

Macron told reporters: “When the far-right, in all its forms, represents that much in France, you can’t consider things are going well, so you must go out and convince people with a lot of humility, and respect for those who weren’t on our side in this first round.”

He told supporters: “Don’t be mistaken, nothing is decided, and the debate we’ll have in the next two weeks will be decisive for our country and for Europe”.

Now Macron and Le Pen have to bring in supporters of the other candidates, especially far-left candidate Jean-Luc Mélenchon.

Mélenchon told his supporters, “Do not give a single vote to Marine Le Pen!”

Those voters chose Macron in 2017. Will they do it again? The Guardian wrote that “polls this time have suggested that a number of them may be tempted to vote Le Pen in protest against Macron.”

Her election would be a miracle for France. Mararoni’s re-election will be akin to the slow-death the Bushes inflicited on the US.

I was in southern France (Marseille, Lyon) and Paris mind-March. I saw very few campaign signs, the ones I did see were mostly for Zemmour. I wonder if this means that most people don’t see any changes occurring no matter who they vote for. If LePen can tap into this sentiment, it could be a big upset.

A choice of candidates, but not of platforms. Just the way the leftilibtards like it.

I think you meant to say “the vote-counters will never declare her to be the winner.”

No, they other candidates will encourage their lot to join macron

Just remember he isn’t French so take what he says about their election with some skepticism. Not that I want Macron to beat Le Penn but national elections often have things foreigners just can’t see.

I read somewhere that the far left socialists (or worse) will vote against her. it will be difficult for her to win if they shift to Macron. Paper ballots and 65% turnout with voter ID. I’m a little jealous of the French today (except for their Socialism).

Well, I was cheering for Zemmour, but it wasn’t to be. I’m no fan of Le Pen, because she’s just as socialist as all her rivals; but I think she’d be better than Macron.