Chalk up another big win this week for Elon Musk. 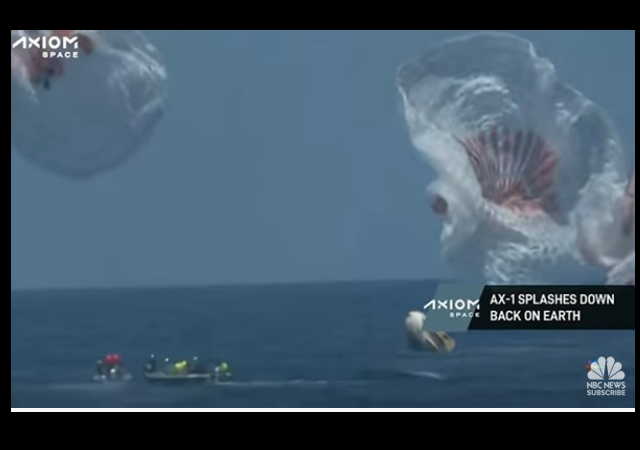 SpaceX CEO Elon Musk had a legendary day on Monday.

Not only did he buy Twitter, but his SpaceX Dragon returned the crew of the first fully commercial space mission returned to Earth safely ..though a little behind schedule.

The first-ever all-private astronaut mission to the International Space Station is in the books.

A SpaceX Dragon capsule carrying the four crewmembers of the Ax-1 mission splashed down in the Atlantic Ocean off the coast of Jacksonville, Florida today (April 25) at 1:06 p.m. EDT (1706 GMT), bringing the groundbreaking 17-day flight to a close.

“On behalf of the entire SpaceX team, welcome back to planet Earth,” a SpaceX mission communicator told the Ax-1 crew just after splashdown.

The crew got bonus time in space as part of their tour.

“Weather in Florida looks beautiful,” SpaceX officials said on the landing broadcast. “We are super go for landing.”

Splashdown occurred off the coast of Jacksonville — one of seven potential landing sites around the state of Florida.

The crew members appear to be in good health, though a bit unsteady after returning to Earth’s gravity.

Applause was heard from the SpaceX flight control center in suburban Los Angeles as parachutes billowed open above the capsule in the final stage of its descent – slowing its fall to about 15 miles per hour (24 kph) – and again as the craft hit the water off the coast of Jacksonville.

In less than an hour, the heat-scorched Crew Dragon was hoisted onto a recovery ship before the capsule’s side hatch was opened and the four astronauts, garbed in helmeted white-and-black spacesuits, were helped out one by one onto the deck. All were visibly unsteady on their feet from over two weeks spent in a weightless environment.

Each received a quick onboard checkup before they were flown back to Florida for more thorough medical evaluations.

“Everybody looks great and is doing reasonably well,” Axiom operations director Derek Hassmann told a post-splashdown news briefing, describing the astronauts as being “in great spirits.”

It was the sixth human spaceflight for SpaceX in nearly two years. SpaceX has been hired to fly three more Axiom astronaut missions to ISS over the next two years.

Chalk up another big win this week for Elon Musk.

Yes, but did they see “Santa Claus” while they were up therefor are they not allowed to talk about that either?

While the website I linked is questionable, there are stories like that all over the place in official NASA transcripts & even space shuttle videos if you are willing to do the research.

I’m trying my best to remember when in the 70’s a real estate and technology entrepreneur and a Canadian businessman went into space, much less traveled to an international space station.