Children are bearing the brunt of the devastating consequences of covid lockdowns and pandemic panic. 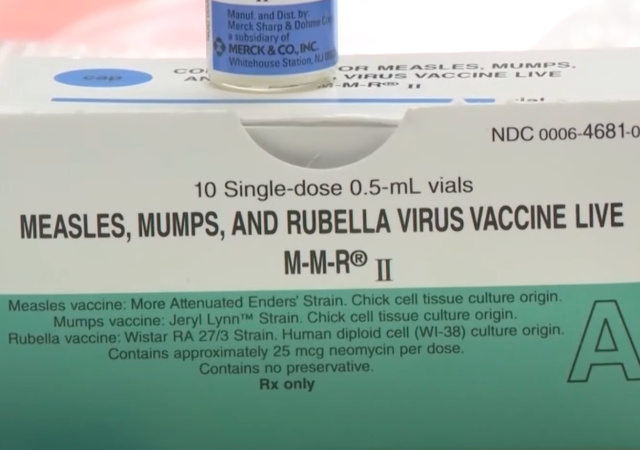 Long-time Legal Insurrection readers will recall that we have been following the resurgence of measles for several years.

The disease, once of the verge of being eradicated, is now poised to make a big comeback.

While praying the worst days of the COVID-19 pandemic are behind us, global health officials warn to be vigilant about other potential outbreaks — this time, measles.

Cases of the disease spiked 79% during the first two months of 2022 compared to the same period in 2021, according to a joint statement issued by the World Health Organization and UNICEF.

Experts fear that all the time spent indoors during the pandemic — and people who aren’t vaccinated against measles — poses risks for the youngest among us, creating a “perfect storm” for outbreaks.

This surge can be directly tied to the covid lockdowns. Between the challenges of getting a medical appointment and disruptions to public health programs due to an intense focus on covid, childhood vaccination rates have plunged.

United Nations Children’s Fund and the World Health Organization have officially linked the surge in measles cases to pandemic-related disruptions to childhood vaccinations.

Some 23 million children missed out on basic childhood vaccines in 2020 that would ordinarily be delivered through routine health services, the agencies’ statistics show — 3.7 million more than in 2019.

“Measles is more than a dangerous and potentially deadly disease,” Catherine Russell, executive director of UNICEF, said in a statement. “It is also an early indication that there are gaps in our global immunization coverage, gaps vulnerable children cannot afford.”

About 17,300 measles cases were reported around the world in January and February 2022, compared with about 9,700 in the first two months of 2021, according to the new data, which probably undercounts the true number of infections.

There have been 21 large measles outbreaks around the world in the last 12 months, the agencies said, most of them in Africa or the Middle East, including nations like Ethiopia, Somalia, Yemen, Nigeria and Afghanistan.

This situation was entirely predictable . . . and predicted. In fact, as of November of last year, the Centers for Disease Control and Prevention (CDC) warned of significant measles outbreaks around the world because an estimated 22 million infants missed measles vaccines.

Fortunately, in the U.S., there have been only two measles cases reported so far this year. Other regions are not faring quite as well against measles or other diseases for which there are vaccines.

Africa is facing an explosion of preventable diseases due to delays in vaccinating children, the World Health Organization (WHO) said Thursday, with measles cases jumping 400 percent.

Twenty African countries reported measles outbreaks in the first quarter of this year, eight more than in the first three months of 2021.

The Africa region recorded almost 17,500 cases of the highly contagious virus between January and March.

The WHO and the UN’s children’s agency UNICEF announced Wednesday in Geneva that measles cases surged by nearly 80 percent worldwide this year, warning that the rise of the “canary in a coal mine” illness indicates that outbreaks of other diseases are likely on the way.

Most of the outbreaks were in Africa and the eastern Mediterranean.

Some 24 African nations confirmed epidemics due to a variant of polio in 2021 — four more than during the previous year.

Thirteen countries had epidemics of yellow fever last year, up from nine in 2020 and three in 2019.

The data is in, and it is transparently clear: The global experiment conducted by “expert” public health bureaucrats at the start of 2020 has been a failure that cost more lives than it has saved. Sadly, children are bearing the brunt of the devastating consequences of covid lockdowns and pandemic panic.

It’s only going to get worse.

The ‘experts’ don’t seem to understand just how much of their credibility and reputation they sacrificed on the altar of masks, lockdowns, and the so-called ‘vaccine’ that they literally had to CHANGE THE MEDICAL DEFINITION of vaccine to label it as such.

Everybody saw that not only did a truly disturbing number of doctors and health ‘experts’ not give a one single fuck about the actual science, they actively attacked and suppressed any dissent.

What a shock that’s lead an awful lot of people to not trust them on other actual proven vaccines.

It’s going to get a whole lot worse before it gets better.

Another in a long line of things that went wrong from taking a knee for the left.

Measles/rubella when I was a kid wasn’t a “dangerous and potentially deadly disease”, it was part of childhood. You got it, you got over it, and you never got it again. Same with mumps.

Exactly. While measles may indeed be deadly in certain cases, those are the exception and far from being the rule. Exaggerating the lethality of measles does no one any favors, and contributes to the distrust of doctors (think boy who cried wolf). Breathless, Chicken Little reporting about the latest “outbreak” doesn’t help either.

The way measles is generally presented these days, you’d think it was a miracle that any of us survived it during the dark ages of surprisingly few mandatory childhood vaccinations (of which measles was not one). Funny, I never heard of any kid dying of measles when I was young.

Lot of guesswork involved apparently, but it seems that the death rate from measles is somewhere between 1 and 4 per thousand cases. Which for children is probably higher than the death rate from covid- but lower for adults, who don’t get measles because they’ve already had it or been vaccinated.

But then there’s deafness- which measles causes. One of the reasons public health nurses in my area fume at the Amish who don’t vaccinate against measles. The deaf rate among Amish is much higher than that in the general population- because of measles.

And measles can cause other problems. Not a benign disease at all. Aside from being miserable while you have it- I had it before there was a vaccine. And chickenpox. And rubella.

It’d be interesting to see what the rate of incidence is with deafness and these “other complications” with regards to measles. Measles swept through my class at the end of fifth grade, which meant that I was deprived of 4th of July festivities, but that was it. None of us suffered complications, and I suspect that holds true for the majority of childhood cases.

It could be perhaps a different story for contracting measles as an adult – which, ironically, is more likely to happen with vaccination, since those who got vaxxed as kids probably don’t bother to get boosters. With natural immunity that’s not an issue.

I personally knew of one kid around my age who was deaf, but his deafness was caused by scarlet fever. No shot for that, I believe. Yet I and others still survived without vaxxes, thanks to a wonderful immune system.

As far as crediting vaxxes for the reduction of childhood diseases… historical data show that such diseases were on a downward trend long before vaxxes were introduced and/or pushed on children. Improved sanitation and hygiene played a far more important role than shots ever did.

With regards to your last paragraph, to many people attribute diseases that going away to vaccines when in fact it has everything to do with cleanliness and sanitation. When those two things go away diseases make a comeback: see Los Angeles and San Francisco.

I remember an old Reader’s Digest article where the author talked about taking young children to an infected child’s friend’s home so they get it and become immune. It was common knowledge that getting MMR while young isn’t bad, but as you get older it can become problematic. Hence, the author supported the idea of building the child’s immunity while young. Too bad “scientist” who are beholden to big pharma, no longer realize that.

It’s the millions of illegals

Bet your money on it’s with worse to come

German measles cause horrific fetal abnormalities. My BF’s was born to a mother that contracted German Measles in the 50’s. Her legs were so deformed and twisted that had to be amputated

She just passed, it was a hard life for her. Very very sad. She tried to have a normal life but people at that time weren’t so forgiving of abnormalities and amputation was not much farther than the Civil War as far as prosthetics.
She was sweet and pretty.
I’m always felt so sad at her hand in life.
Same with my cousin that got a very virulent form of polio, after the vaccine was out for 2 years, yet her parents did not get their children vaccinated z it blew my mind, 16 and paralyzed from the neck down for the rest of your life. My sister and she were very close amd remained so till her passing.

Polio, of course, is an entirely different matter. I had a friend who contracted polio at a very young age, and it caused severe trauma to his legs. He never could walk right again. Once again, though, the polio vaccines hadn’t been invented yet, and the incidence (in my experience only) was rare.

As predicted, shutdowns, lockdowns, masks all serve no purpose for healthy people except to weaken their immune system. This is medical malpractice on a global scale.

It occurred to me after my last comment posted that we have a relatively large, meaning statistically significant, control group of unvaccinated who keep very good birth and death records.

I strongly suspect that if some enterprising young college student well versed in probabilities and statistics were to venture out and approach the Amish, and ask them for their last 10 years of death statistics, that the death rate, average age of death, hasn’t changed one bit since the covidiocy started. In my local town there are a few hundred Amish, in the county and the one south a few thousand. Statistically significant numbers. One would have to approach the elders of each community, explain why the numbers are desired, and what the numbers might reveal, but I don’t think that would be a great obstacle

The Amish, for the most part, fit the definition of “otherwise healthy”, that is, people for the most part that might die with covid, but not from covid. If covid significantly affected their unvaccinated community- it will be obvious from the numbers. I haven’t heard any of the public health nurses in the area talking about spikes in Amish deaths- which is why I suspect if someone were to look at the cold hard numbers, we’re going to see virtually no change in their death rate and age of death since covid began. I do believe that they have to- and do- report all deaths to the state- but there’s no way to separate out their numbers- the death certificates aren’t marked “AMISH”. Nonetheless, county clerks might have an inkling if there were a spike in deaths among them. And again- I’ve heard nothing.

I will say this, the Amish in Wisconsin had an adverse on to soap and any kind of deodorant.
It was awful to be around a group of them. I felt sorry for the teens, but I’m sure they didn’t care what I thought.

Now THIS is an outbreak the world should be worried about. However, we don’t close down economies and wear masks to deal with it.

Another fiasco to hang around the neck of that fraud Tony Fauci.