“The commissioner leads an agency, but I lead the city. I’m the mayor of the city and all communications that come through this city government is coming through my message.” 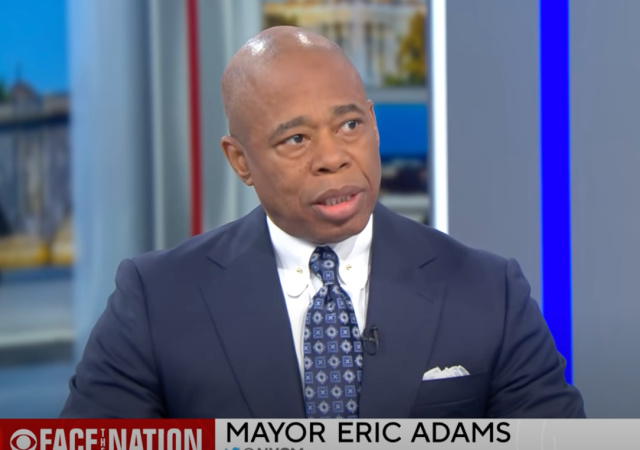 Politico obtained audio from a Zoom call of NYC Mayor Eric Adams telling his staff he has to approve all communications from every city agency to counter the “gotcha” press corps.

“The first few months we’ve noticed that press advisories have gone out or press releases have gone out and number one, we knew nothing about it or it was something that we were still contemplating here — and that’s just not how I operate,” Adams said during a Zoom call Thursday with about 50 officials from city agencies.

“I’m a big believer in discipline, discipline of message and discipline of action,” continued Adams, a former cop who is known for his commitment to early mornings, daily meditations and a healthy diet.

It’s unclear what wayward messaging the mayor was referring to, but several high-ranking officials have recently made statements contrary to his positions.

“Discipline of message.” Alrighty then.

Adams wanted parents to decide if their toddlers should wear a mask. His health commissioner Ashwin Vasan said the city should keep the mask mandate for toddlers.

A Fire Department official testified at a hearing against using propane heaters for outdoor dining. Adams responded, “I like outdoor heaters.” He added, “The FDNY? They work for me. And the final say-so of how we execute my agencies will be determined by me.”

John Miller, the NYPD’s deputy commissioner for counterterrorism and intelligence, said the police didn’t put surveillance on Muslims after 9/11. Adams admitted it happened: What we did was wrong. We did some things that were wrong, and they will never happen under my administration.”

It’s normal for a mayor to review some press releases and have some agencies “flag at least some media advisories.”

Adams’ new intiative seems to be going too far:

But Adams’ new “city agency press release tracker” where communication officials from dozens of departments must submit press releases, plans for press conferences or other public statements for approval is beyond the level of message control demanded under previous administrations, according to four officials who have worked for multiple mayors.

“You check with City Hall on things, but not at this level,” one agency official said in an interview.

“What I found strange is people were talking about very innocuous things like planting trees and he said, ‘I want to know about it.’ It seems pretty micro-managey,” the official said. The official also questioned Adams’ apparent lack of trust in the commissioners he appointed.

“What is imperative to know is, you are assigned to an agency under a commissioner but you work for me,” Adams said during the Zoom.

“The commissioner leads an agency, but I lead the city. I’m the mayor of the city and all communications that come through this city government is coming through my message.”

Adams told a parks department employee they have to alert him about advisories concerning “a tree planting volunteer event or ‘fun things like last week’s cherry blossoms.”

“The answer is yes because sometimes I’m at an event and the team prepares me with notes and the worst thing that could happen is if you did an event or one of the other teams did an event and I’m questioned and have no idea what it is,” Adams responded.

“It’s amazing where you and I see some things as simplistic, but we’re dealing with a very aggressive press corps where there’s an ‘I gotcha’ moment instead of ‘I got you’ and we need to be on top of that.”

A staffer said Adams has an open-door policy, but warned them what would happen if anyone betrayed him: “I do not accept people sabotaging this administration. If I ever find out that happens, someone intentionally does something that is inappropriate, you will not work for me as the mayor.”

The whole “discipline of message” remark sounds authoritative and is bad enough, but Adams sounds like a control freak. That cannot be a positive trait for America’s largest city, especially with horrific crimes happening every day.

He’s got a point. Along with one on top of his head.

This guy is Pete Butthead, but with a little street in him.

Adams, like any other NYC mayor past or future, will be judged by the totality of the actions of his administration. I think he is acting correctly in requiring subordinate agencies to clear their messaging with his office—PROVIDED that Adams’ does not promote dishonest messaging.

I’m willing to give him the benefit of the doubt so far, too. I’m sure there are more than a few rogues from the de Blasio era that are hard core SJW. Waiting in the shadows to take down the guy who’s otherwise progressive as hell (Adams) but simply believes in law and order. Just like the knives are finally coming out for Biden, they’ll come out for Adams if he allows it.

The subtext of this issue coming up so early in his administration is that things are already out of control and will almost certainly not get better.

PROVIDED that Adams’ does not promote dishonest messaging

He’s a Democrat. Is there any real chance he won’t be thoroughly dishonest?

This is an expression of self-important paranoia. Messaging is not his job. He can hire people for that. Policy is his job.

But he doesn’t trust the people whose job is putting out and shaping the message. So he wants the main thing idiot leftists always want CONTROL.

Control freaks are always bad managers. And they never know it.

Every single company I’ve worked for has included in the employment contract words to the effect of “Do not talk to the media about the company”.

Messaging is his job. It’s frankly his primary job. He can also and will also hire people to do that, and he’ll delegate much of the messaging to them.

Policy? Policy counts for nothing if you don’t control the messaging. Trump had to learn that the hard way. Biden’s handlers are learning it the hard way. Sounds like this guy is ahead of the game.

Messaging is his primary job? Pure BS. Running the city is his job. Messaging is one tool, and not the most important or effective one.

Sounds like a lot of extra work for the mayor. He wants to review most the communications of a big city so he will be prepared. He could try “I’m not aware of that” or “no comment at this time” as an alternate.

“Sounds like a lot of extra work for the mayor. ”

NYC had that Mayor. Why it doesn’t operate so well now.
They voted for someone to get back to the ’90’s when people actually felt safe and crime was minimal for a city of +7 million.

It’s an acknowledgement that the government is staffed with insane far left freaks that are incapable of keeping their mouths shut about things that the left knows is unpopular.

He’s not telling them to not do those things. He’s just making sure they keep their mouths shut about them.

He’s the new Sheriff in town and he is sending a message. Those who can’t work for him will show their hand earlier by trying to undermine him. Being he will be on board for 3.5 more years, better he glean the wheat from the sheaf now so what he vowed to get done, gets done. He should send out to every employee and department head the book “Who Moved MY Cheese?”

I want to qualify the previous post. As I was addressing the merits of becoming a new leader w/different policies and administrative tactics, I believe change has to happen in order to move forward. I’ve come to find out the L.I. article is an abbreviation of what actually happened and in this case the Mayor got out over his skis and did wrong. If he wants to lead, then his goal should be with the Administrators working directly with the employees to carry his message. If he has micro-managed rather than re-enforce policies and lead by example.

Adams Cocktail: Control freakishness mixed with incompetence topped with arrogance. Assume the position, New York: you’re getting everything you demanded and which you so richly deserve.

He’s micromanaging but I can empathize.

If I were suddenly elected mayor of NYC and had a lot of corrupt embedded staff I wouldn’t trust any of them either.

His inner circle of staff probably won’t enjoy it but it’s necessary work.

And believe me, I know this guy is not a conservative dream. However, he’s also a nightmare for the AOC progressive types of the sphere.

He’s lying. It’s what democrats do.
On another site a squishy repub said he’d give adams the benefit of the doubt because he thought adams wouldn’t be against the Second Amendment. I’m sure the squish learned the same lesson he’s been wrong on time and again. Stockholm syndrome, he’s been a prisoner of new york for so long even the tiniest of hope brings out the stupid.

Remember, sheep feel protected by the shepherd against the wolves. But in the end it’s the shepherd that kills and eats the sheep most often.

What gotcha press corps? They fawn all over him and anything else NYC.

So he’s telling New Yorkers in government not to say anything unless it’s approved by him. I hope that works out but I doubt it will.

Too many people are saying the quiet part out loud, and it’s threatening to overwhelm the margin of fraud.