The cops claim the babies were aborted legally. 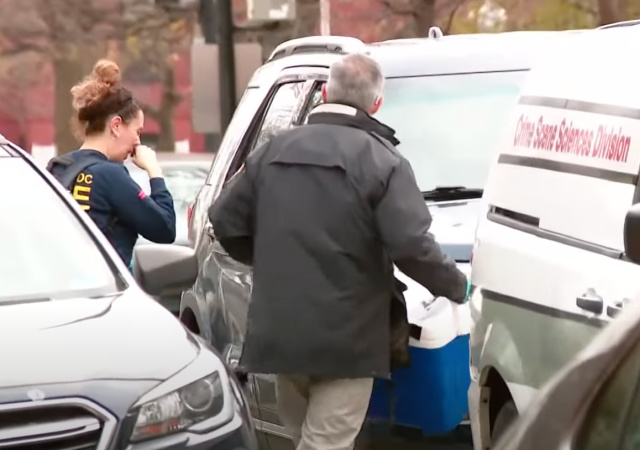 The Washington D.C. medical examiner does not have any plans to perform autopsies on the five aborted babies found in a home.

D.C. police stated, “the babies were aborted legally.” The district does not have an abortion law banning it at a certain point. So a woman could abort her baby at nine months.

The police said the only crime in this story “is how the aborted baby bodies” landed in the house.

Authorities discovered the bodies at the home of Lauren Handy, a member of the Progressive Anti-Abortion Uprising (PAAU).

The original media reports asserted someone gave the police a tip of a biohazard in Handy’s home. But PAAU said a whistleblower provided the organization with the babies.

Nine pro-life activists face charges under the Freedom of Access to Clinic Entrances Act. The FBI made the arrests.

PAAU also claimed, “one of the defendants privately arranged for the” police to pick up the babies “for forensic examination.”

“Their gestational ages and their apparent sustained injuries suggested possible violations of the federal Partial Birth Abortion Act and the Born Alive Infants Protection Act,” wrote PAAU on Twitter. “These babies were given to police based on the suspicion of these violations.”

PAAU confirmed, “The whistleblowers who received the fetuses and the defendants arrested by the FBI are connected.”

Handy allowed Live Action to photograph the babies. A video shows the babies in a box from the Washington Surgi Clinic, which performs abortions up to the second trimester. But you never know. It could perform abortions at any stage since D.C. doesn’t have a law preventing them from doing so.

A mother can feel the baby move during the second trimester. She also finds out the sex of the baby during this time.

Lila Rose of Live Action posted pictures of the babies on Twitter. I will only provide her initial tweet. You can look on the thread if you want to. I have no problem with Lila showing the babies because the world needs to see what happens to a baby when a doctor murders them.

Live Action also describes the details of the babies.

Please help out any emergency pregnancy center or organization.

The bodies of at least 5 preborn children, some of whom may have been born alive and then killed, have been discovered in Washington DC.

Prepare for graphic imagery ahead in this critical thread

Five choices: abstention, prevention, adoption, compassion, and self-defense through reconciliation, not including the wicked solution a.k.a. planned parent/hood a.k.a. reproductive rites a.k.a. “burden” relief h/t Obama a.k.a. Gosnell’s grove a.k.a. Cecile’s clinical cannibal (shout out to Mengele).

You could give your baby the same chance you had.

Women and girls are among the most firm believers in that. If only men fought for babies even Texas would probably have unrestricted abortion.

To give an example Lila Rose has done more for the pro-life cause than any man has.

Don’t let the leftist narrative of how women love abortion and it is the misogynistic mansplainer from hell etc influence you.

No one on the left ‘loves’ abortion. Given you think that you probably have no idea what the left actually argues

It’s really so evil so evil

No autopsies? Reason seems clear. Close examination of facts can reveal potential crimes. By not examining the facts, there are no crimes. The history of this continues. Hunter laptop? We don’t see any laptop here. Hillary had emails showing pay for play? What emails? Just depends on who the powers-that-be decide need to be put through the wringer.

This isn’t just evil it is murder. It is also a taste of what we are against and why we need to win the political fight/cultural cold war going on.

Under various Federal statutes reinforced by the Chinese Exclusion Act of 1882, and further reinforced by various state laws, from the late 1800’s to 1943 those of Chinese ancestry in this country were legally not considered to be human beings. Crimes could not be committed against them, because they were not people under the law.

I grew up in Metro Denver. The original Denver Chinatown was where the Colorado Rockies stadium stands today. On October 31, 1880 3,000 whites, led by the KKK, burned Chinatown. Yes, there were fatalities and casualties, but since they were “not people” there was no justice for them. In passing, my father came from China, 12 years old and alone, just before the Great Depression and from then until 1943 he also was classified as “not people” and anything could be done to him with impunity.

Democrats in general, and the Democrats in DC are just being consistent with their longest held beliefs since they classify children from before birth to until they are old enough to sexually molest to be “not people”.

Would you go to Vladimir Putin and demand his regime conduct an investigation into war crimes in his illegal war in Ukraine?

Well, I wouldn’t be worrying about this kind of thing. After all, Colorado just signed abortion law into effect that allows the woman to abort their pregnancy at any time up to and including the day of birth or later and provides serious consequences for any physician/doctor that refuses to perform such an abortion. All under the guise of providing “birthing persons” unlimited access to “healthcare”. Yep, The Colorado legislature has authorized infanticide within the borders of their state.

And many other liberal states are enacting similar laws in anticipation of the overturn of Roe and Casey by the SCOTUS.

Its not infanticide as its still a foetus. and no it doesn’t allow abortion post pregnancy all it does is make women the arbiters of there own fate ensuring government doesn’t exercise any unconstitutional coercion on said person. Note the word person, which foetus’s are not.

I can’t think of any good thing coming out of D.C. Maybe a modern day Lot will leave the city and as instructed not look back.