The Great Famine shows the Chinese Communist Party will bitterly cling to deadly policies based on “science” no matter the human cost. 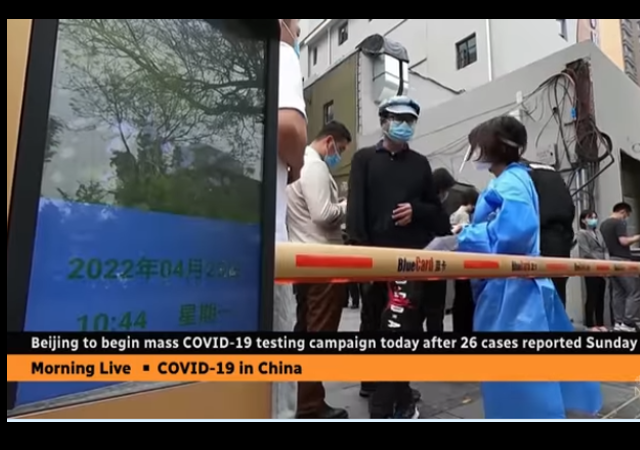 The Chinese Communist Party is still bitterly clinging to its “zero covid” policies, despite the fact most of the world has moved on and is dealing with it as an endemic disease.

Beijing has been spared much of the covid drama until recent testing has shown 70 cases in the nation’s capital city.  Mass testing has now begun.

Beijing will conduct mass testing of most of its 21 million people, authorities announced Monday, as a new COVID-19 outbreak sparked stockpiling of food by residents worried about the possibility of a Shanghai-style lockdown.

The Chinese capital began mass testing people in one of its 16 districts where most of the new cases have been found. The city also imposed lockdowns on individual residential buildings and one section of the city. Late in the day, health officials said the testing would be expanded Tuesday to all but five outlying districts.

While only 70 cases have been found since the outbreak surfaced Friday, authorities have rolled out strict measures under China’s “zero-COVID” approach to try to prevent a further spread of the virus.

It appears that Beijing residents seem to be aware of the struggles in Shanghai with food. Panic buying is being reported.

Beijing residents have gone into a buying panic as a mass COVID-19 testing order is announced. Residents in Beijing’s biggest district, Chaoyang, are now being asked to test three times weekly to slow the virus spread, authorities announced Sunday.

Beijing residents have started emptying out grocery stores for essentials, fearing they will be forced to undergo a lockdown similar to Shanghai’s, which is going into its fourth isolation week. Shoppers are stocking up on basics, including “vegetables, fresh meat, instant noodles and toilet paper,” according to Reuters.

Both grocery stains chains and online grocery services have braced themselves for the high product demand. Carrefour and Wumart have stated they doubled inventory while Meituan has increased their number of staff.

Beijing’s financial hub, however, is experiencing a main bottleneck supply due to a lack of couriers to make deliveries.

I wonder how the green justice activists feel about the Chinese flushing the streets with environmentally harmful disinfectants!

The Chinese Communist Party is arrogant and ignorant if it thinks it can contain this virus. As it bitterly clings to the “Zero Covid” policy, I remember another plan it clutched to that resulted in millions of deaths: The Great Leap Forward.

The Great Leap Forward (implemented between 1958 to 1962) resulted in inefficient food distribution within the nation’s planned economy. It relied on poor agricultural techniques promoted by dictator Mao Zedong. The plan also enforced the Four Pests Campaign that reduced bird populations (which disrupted the ecosystem), and millions of farmers were also diverted to iron and steel production.

Author Yang Jisheng wrote a book (Tombstone: The Great Chinese Famine), which dug through the archives on The Great Famine that was the consequence of “science” based on politics rather than data. His account is chilling.

The Great Famine remains a taboo in China, where it is referred to euphemistically as the Three Years of Natural Disasters or the Three Years of Difficulties. Yang’s monumental account, first published in Hong Kong, is banned in his homeland.

He had little idea of what he would find when he started work: “I didn’t think it would be so serious and so brutal and so bloody. I didn’t know that there were thousands of cases of cannibalism. I didn’t know about farmers who were beaten to death.

“People died in the family and they didn’t bury the person because they could still collect their food rations; they kept the bodies in bed and covered them up and the corpses were eaten by mice. People ate corpses and fought for the bodies. In Gansu they killed outsiders; people told me strangers passed through and they killed and ate them. And they ate their own children. Terrible. Too terrible.”

For a moment he stops speaking.

“To start with, I felt terribly depressed when I was reading these documents,” he adds. “But after a while I became numbed – because otherwise I couldn’t carry on.”

Looking at what is happening in both Shanghai and China, one must wonder just how bad it must get before the Chinese Community Party gives up “zero-covid”…willingly or otherwise.

For more on The Great Famine, please watch this video.

The CCP is not an adaptive of flexible beast simply by the nature of its composition. Lies up and down the chain of command are standard procedure, and posts get filled by a combination of party loyalty, corruption, and adherence to doctrine. Tall poppies are cut down as disruptive to the order, so responses follow whatever protocol was developed, and correcting protocol is difficult.

It would be positively uplifting if the Wuhan flu spread among the CCP and wiped those boys out.

From the reaction, it’s not covid. God only knows what got out of the lab there this time, but the govt sure is runnung scared, so whatever it is, it’s bad.