Brutal COVID Lockdown and Food Shortages? What Is Happening in Shanghai, China?

Brutal COVID Lockdown and Food Shortages? What Is Happening in Shanghai, China?

Starving people who feel they have nothing to lose can become very difficult to control. 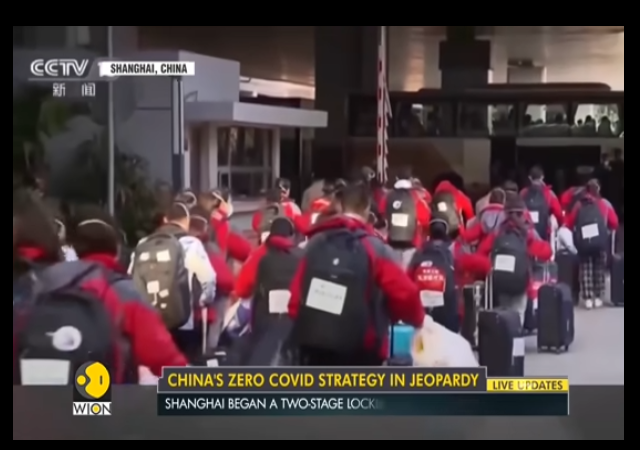 While covering the covid pandemic for the past two years, I have been astonished by the lack of skepticism by our press about the infection cases and fatalities reported by China, where SARCS-CoV-2 arose.

A look at the official reports reveals that after the initial outburst, the numbers flat-lined.  The Chinese proclaimed their zero-covid policy was a glorious success . . . despite it being a total failure everywhere else in the world.

In fact, just a few short weeks ago, Chinese Prime Minister Xi JinPing said, “Some foreign athletes told us that if there was a gold medal for epidemic response, it should be awarded to China.”

Then came the Omircron variant.

Foolishly, in the wake of the most recent outbreaks,  Chinese authorities attempted to enforce their zero-covid nonsense on Shanhgai, the most populous city in the world with a population of 26 million. The “experts” thought everyone in this metropolis could be contained and then supplied remotely, even after two years during which supply chains have already been slammed and people’s nerves are completely frayed.

The plan was a spectacular failure.

Public disorder broke out in Shanghai last night as the Chinese Communist regime’s draconian restrictions to eradicate coronavirus cases left residents running out of food – while cases continue to rise.

China’s largest city and financial centre has been under lockdown for 22 days, despite public health officials warnings that the Omicron Covid variant is so infectious that it cannot be wiped out by lockdowns.

Shanghai residents are only allowed to leave their homes once a day to collect food and infected Chinese children have been separated from their parents in a desperate attempt to stop the virus spreading.

A video yesterday also showed a ‘Covid protection warden’ beating a corgi dog to death with a shovel because its owner was infected with coronavirus.

Residents in #Shanghai screaming from high rise apartments after 7 straight days of the city lockdown. The narrator worries that there will be major problems. (in Shanghainese dialect—he predicts people can’t hold out much longer—he implies tragedy).pic.twitter.com/jsQt6IdQNh

However, there may be much more to these developments that the mainstream media (especially since China dumps billions into new entities to support its many narratives).

Videos about Shanghai are disappearing.

Shanghai’s 25 million people under lockdown indefinitely. Chinese social media shows some breaking out of lockdown to protest, chanting: “we want freedom”; “why are you starving us?”
Much of the dissent is censored. Most of videos in our story were erased from the internet @cnn pic.twitter.com/QUHrfqEhiG

Chinese officials are using drones to warn Shanghai residents to ‘control the soul’s desire for freedom’.

The move comes as residents banned from leaving their homes have reportedly taken to singing ‘why are you starving us?’ from their balconies in protest at the lack of food and water.

A clip shared by a senior correspondent for the Economist, Alice Su, from Chinese social media site Weibo, appeared to show a drone in the sky telling residents to stop singing.

Su wrote: ‘Shanghai residents go to their balconies to sing and protest lack of supplies. A drone appears: ‘Please comply with Covid restrictions. Control your soul’s desire for freedom. Do not open the window or sing.’

Feeding 26 million people via a mega-scale “Door-Dash” system is a lot easier on paper than it is in reality.

COVID-19 LOCKDOWN – SHANGHAI: The quarantined #Shanghai People are starving, but all food are wasted in Logistics warehouse, man-made disaster. pic.twitter.com/PY6AWOeXft

And while lockdown restrictions are easing, there is a real possibility shortages of food and medicine could arise again if “zero-covid” remains the goal.

Lockdown restrictions in China’s most populous city will soon be lifted in areas that go two weeks without reporting new cases of COVID-19, authorities confirmed Saturday.

Large swaths of Shanghai have been under lockdown since March 28, and nearly all of its 26 million residents are confined at home, leading to complaints about shortages of food and other basic necessities.

Another round of mass testing comes as Shanghai reported about 23,000 cases on Saturday, most of them asymptomatic.

The scale of this week’s protests is significant, even with the suppression of information from the media.

Food riots in Pudong Shanghai. Crazy crisis management. People are starving in one of the richest city of the world. #shanghai #covid19 #ZeroCovid pic.twitter.com/ZOX7skwCWZ

“The government is lying.
Where is communism?” #china #lockdown #Covid_19 #shanghaipic.twitter.com/rU4n9YF5c0

I can’t imagine. In the 21st century, in a city with the largest GDP. In order to live, Compete for foods.#Shanghai pic.twitter.com/wBVVrg1b97

It’s also worthwhile noting the Chinese rely much more on fresh produce (hence, wet markets). They are not inclined to stockpile with processed or preserved foods.

The fact that many Westerners have a relatively unhealthy diet of processed, pre-prepared foods with an extremely long shelf-life actually serves them well here and makes the time-sensitive and precarious nature of the Chinese food supply situation a little counterintuitive.

One really has to wonder what exactly is going on in Shanghai. One analysis of available video shows People’s Liberation Army (PLA) members were sent to Shanghai and similar lockdowns are occurring through the country (including the capital of Beijing).

Starving people who feel they have nothing to lose can become very difficult to control. In fact, as discussed in the video above, someone wrote, “people in other countries are sending men to Mars, while we are tying to figure out how to avoid starving to death.”

In conclusion, the “gold medal” for covid response Xi boasted about is just as worthless as the Nobel Peace Prize Obama received.  If this “zero-covid” approach remains Xi’s policies, it may be that he won’t be around long enough to receive more praise from foreign dignitaries which could end up being the most mild internal Chinese response to this true man-made catastrophe that occurs.

What is happening in Shanghai can happen here. Hopefully we can get rid of Joe BIden before it’s too late. Otherwise……..

I don’t wear a tin foil hat but the only reason I can come up with that we don’t hear criticism about China from anyone anywhere up and down the entire American culture is because too many want their money and/or tyranny. It makes no sense otherwise.

The government of China is pure evil. Why people outside its borders can applaud it is disgusting.

China is facing a destabilizing Famine because of a record bad harvest and an inability to buy food internationally.

For city folks here…estimate 24 hours in the water supply, 2-3 days in the food supply, power can be fickle….

Think ahead, or you can get into trouble real quickly….

In a weeks time, city dwellers will begin pouring out to the country side looking for food. The more Christian inhabitants there will work to accommodate up to a point. The others, not so much.

“In a weeks time, city dwellers will begin pouring out to the country side…”

With the village gone, who will raise the children?

Anybody that believes ANY of China’s COVID numbers at any point needs their head examined.

The idea that one of the most densely packed countries in the world magically managed to have zero COVID up to this point is such a ludicrously bold lie that Orwell would blush.

“Control your soul’s desire for freedom….”

I’ve read that many places, I don’t know if it is an accurate translation but who cares, the concept is 100% accurate. There is no desire to control the “freedom” of the Kommies to rule over you with an iron fist. How come they get to do whatever they want but no one else can? Oh yeah, they’re F-ing Kommies. They get freedom. You don’t.

I hate communists and their cousins as well. I have for well over 50 years.

I don’t hate the commies. I hate the spineless sycophants who enable them.

Why not both? Be an equal opportunity hater!

Baffling that China keeps acting like this in response to Covid which is all but a joke at this point.

Maybe something else got loose from the labs revcently that’s really scaring the Chinese and Covid is a just a cover story they are using to try and prevent people from learning they let loose a real monster virus.

Starve people long enough and get them angry enough is a good way for governments to fall which is why I think something other than Covid is going. It’s too much of a risk for China to act like this over Covid when the rest of the world has pretty much moved to go back to normal.

I’ve said many times on many blogs- IMHO the dreaded covid wasn’t the only virus to escape the lab. They thought they eliminated the most virulent- but didn’t. From their constant what seems to be completely over the top overreaction to what they say is covid- they’re managing to keep it contained to China, whatever’s roaming around. If it’s deadly fast, it is possible to reduce the spread with travel lockdowns. The real danger would be if it mutated into deadly slow.

The reason more deadly viruses that jump from animals (mostly) to humans in Africa don’t spread to the rest of the world very often- they often kill everyone in the first infected village before they have a chance to interact with anyone else.

The Swine encephalitis destroyed the pig herds of China. I have wondered if it could have a lab origin.

It’s not baffling if you know China’s recent history.

China is not a culture that values hard truths, and in fact, they go to incredible lengths to commit to ludicrous courses of action, because the people at the bottom are downright afraid of telling the truth to their superiors.

The so-called ‘Great Leap Forward’ was the idea that they could set quotas on the farmers to provide to the State. The problem was that the quotas were based on ludicrous overprojections that were impossible, but instead of informing Mao, they simply ruthlessly confiscated the quotas and left the farmers to starve. Any problems were blamed on ‘subversives’ or ‘radicals’, and dismissed. This policy continued for YEARS, and resulted in TENS OF MILLIONS of peasants dead of starvation before they finally relented.

China is still in ‘zero covid’, despite the rest of the world demonstrating conclusively that A) Covid was never anywhere NEAR as deadly as claimed, and B) zero covid was an insane and impossible goal. They’ll imprison you in your home as you starve without a second thought.

Maybe ‘progressives’ have taken over the Communists Party…..wait a minute….

To quote Tommy Lee Jones in The Fugitive:
“I don’t care!”

“That which we are about to receive, we thank thee, O Lord.”

Mose Harper in the Searchers

I remember Ole Mose too.

I remember the videos that came out of China when they were forscinflg a woman back into her apartment and nailing it shut, apparently a positive Covid person
I remember thinking how freaking crazy they were and that that could never happen here.
Right
I wonder, are they setting us up again?
WTF, we know omicron is pretty much a nothing burger, so what is going on?

Even though the shortages may be for many reasons, the lockdown in Shanghai is a complete and absurd over reaction. Assuming the numbers they released are correct, only .0025% of the city’s population have tested positive for Covid. And since the latest Covid variant is said to be very mild, the move by the Chinese government is even more bizarre.