“It’s just a matter of time before these white motherf—ers decide, ‘Hey listen. Enough is enough. These n—ers got to go.’” 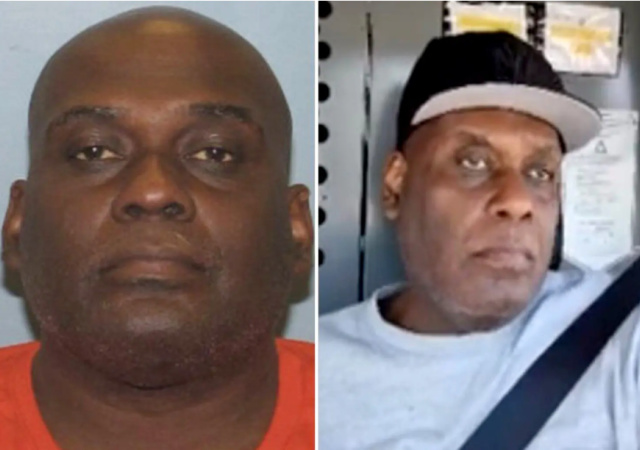 The NYPD now considers Frank James a suspect in the Brooklyn Subway station shooting that injured 29 people. From The New York Post:

Frank James, 62, was initially named as a person of interest in the wake of Tuesday’s rush-hour attack on the N train in Sunset Park.

The upgrade to James’ status was “based on new information that has become available to the team,” Mayor Eric Adams told WNYC radio.

Adams did not disclose what the new information was or how it was obtained.

James was still at large as of Wednesday morning.

“We are going to continue to close the loop around him and bring him in, and continue the investigation into this horrific act against innocent New Yorkers,” Adams said on MSNBC.

On 4/12/22 at 8:30 AM, Frank Robert James fired numerous gun shots inside an "N" line subway car at 36th St & 4th Ave subway station causing serious injuries to 10 people. Anyone with info about the incident or his whereabouts should contact @NYPDTips or call 1-800-577-TIPS. pic.twitter.com/MaeF16i4bX

But then there are the videos James posted on YouTube. He ranted against Adams, the homeless problem, and the lack of mental health help.

“Mr. Mayor, I’m a victim of your mental health program,” James said in one lengthy video.

He also criticized the mayor for not doing more to combat homelessness.

“Eric Adams, Eric Adams: What are you doing, brother? What’s happening with this homeless situation,” he said while referring to the subway. “Every car I went to was loaded with homeless people. It was so bad, I couldn’t even stand. I had to keep moving from car to car.”

James said in the videos that he had a diagnosed mental illness and railed against what he called the “horror show” of the city’s mental health services.

“What’s going on in that place is violence,” he said about a facility where he claimed to have received care. “Not physical violence,” he explained, “but the kind of violence a child experiences in grade school … that would make him go get a gun and shooting motherf—ers.”

In another video, James claimed the war in Ukraine is proof that society hates blacks:

“These white motherf—ers, this is what they do,” he said. “Ultimately at the end of the day, they kill and commit genocide against each other. What do you think they gonna do to your black ass?”

In his rambling conspiracy theory, James claimed that a race war would follow the ongoing conflict in Europe.

“It’s just a matter of time before these white motherf—ers decide, ‘Hey listen. Enough is enough. These n—ers got to go,’” he said.

“And what’re you going to do? You gonna fight. And guess what? You gonna die. ‘Cause unlike President [Volodymyr Zelensky] over in Ukraine, nobody has your back. The whole world is against you. And you’re against your f—ing self. So why should you be alive again is the f—ing question. Why should a n—er be alive on this planet? Besides to pick cotton or chop sugar cane or tobacco.”

The only options James could find, he claimed, was to commit more violence or become a criminal.

“And so the message to me is: I should have gotten a gun, and just started shooting motherf—ers,” he said.

“Or I should have gotten some dope and started shooting or starting hitting bi—es in the head, robbing old ladies, you know what the f— it is.”

It’s also being reported that he was yet another in a long line of violent criminals whose behavior caught the attention of the FBI, but as usual, the ‘authorities’ took no action. Other than to dismiss the inquiry and close the file. The rapid declaration that ‘this isn’t terrorism’ is becoming a tell for malfeasance on the part of our ‘authorities’.

Only white people can be racist. Black people are NEVER racist nor terrorists.

Fram what I can see, overall, blacks are the most rabid racists in America today. Thier racism is why everything affirmative should end. They do not deserve it.

Blacks with merit should be helped with scholarships, exactly the same as we do for oher races.

The real issue is that, just as here in NYC subway attack, the person doing it was known to authorities and may have been prevented had they acted. The fact that the damn security cameras were non operational is icing on the cake of govt incompetence.

These leftist would be totalitarians want to erect and maintain a vast surveillance apparatus but then seem to ignore the violent weirdo criminals who pop up on the system. Ending the post 9/11 security theater and surveillance both of which are ineffective should be priority.

When whites commit crimes, mobs of demonstrators do not rise up to defend them, and ghetto lottery lawsuits either do not happen at all or are much more likely to fail.

Your focus on ethnicity won’t help end the surveillance state. It’s supporters and advocates will be able to frame your position as an ‘ism’. It shouldn’t matter which ox is getting the chop from the axe of the security/surveillance state. The goal is to stop the axe from being wielded by removing from the State.

I just gave you an up vote. Still, we have one group who has been raising hell, a group with the highest per capita crime rate in America, a group who riots frequently and uses those riots as cover to loot. A group who blackmails the whole country.

And, then there has been their nationally organized persecutions of people like George Zimmerman and his family. With Daren Wilson, a bunch of black lawyer conspired to further persecute him.

There is so much more. It is F ing unacceptable. In many respects those who are doing these things are as bad as the cretions in Palestine.

They happen to be black, if any other group, regardless of race was operating in the same manner, I would feel the same way about them.

All races have been surveyed about who is the most racist and Blacks were the consensus. The interesting part of the survey was that Blacks actually voted Blacks as the most racist.

It’s pretty obvious that none of the “missing” $850 million that Mayor de Blasio’s wife was supposed to use for mental health went to this guy.

I’d bet a nice fraction of that is in her bank account, or a family member’s. Too bad nobody will do a proper investigation. The same happened to the hundreds of millions in the State Department budget that went missing under Hilary’s watch. Apparently it’s impossible to trace large sums of money so the Inspector General who looked into the matter didn’t bother to do so.

There were no hundreds of millions that went missing. That whole story was based on an Inspector General report that said that contracts to that value had missing paperwork, and thus couldn’t be properly audited. But the same Inspector General, Steve Linick, then clarified that this did not mean the money was missing. See here. Yes, it’s Politifact, which is not generally a reliable source, but the IG’s statement that it quotes speaks for itself, so it seems to have got it right on this occasion. Blind pigs and acorns, stopped clocks, etc.

This story will hit the memory hole along with the 2 other black nationalist criminals, Darrell Brooks and Quintez Brown.

“It’s just a matter of time before these white motherf—ers decide, ‘Hey listen. Enough is enough. These n—ers got to go.’”

Well, from the news items and accompanying photos I see from across the nation, black males are doing that for them.

In a way, this shooter is right that Black lives in this country are incompatible with the advanced civilization that European Americans created. It’s obvious they are failing and many of them struggle with this failure. No amount of virtue signaling and cognitive dissonance from leftist can cover the fact that Blacks are a stone-age people who never invented the wheel nor writing. I don’t mean that in a negative way. We need to recognize reality and not try to distort our view of reality to match our wishes. Both we and they would be better off if they live their lives they way nature intended them to live, in a less advanced society.

The only difference between the present Black Ghetto Culture and the classic “red neck cracker culture” are skin tone and soft bigotry of low…really low…expectation.

It’s so bad I ordered crackers from Amazon and they sent me two white people in box.

I agree in part, but there have been many black inventors. For a condemnatory example, look up Lawnie Taylor. He is a decent accomplished person. I know a fair number of other accomplished black men. The problem is that they are rare, low percentage.

I would add that low life blacks are not their fault, and that it must be hard for them seeing their collective opportunities going south.

While I am sick of black BS, I try to make it clear that I value and have empathy for those blacks who actually have merit.

Hate crimes by blacks have been increasing with great rapidity the last few years. The emphasis by Obama, CRT, BLM, 1619 projest, movies, tv commercials, universities, media has changed the thinking of many black people to see themselves as living in a totally hateful white-racist country where they have the right, the obligation even, to respond with hate toward white people, even to the point of killing them.

The tide is on their side, the wind is at their back, they are backed up by black politicians, black DA’s, black judges, etc. and their position to act at this time seems favorable to them.

This is not going away anytime soon, but it will increase before it decreases.

I in no way endorce list. That is where we lose. That being said I know law enforcement could have had a chat with him about this.

Frank James has been apprehended and is now in custody.

let;s see what the public defenders on steroids called DAs do as far as what he is charged with now that he has been arrested

You had to know preaching CRT and white supremacist was going to fire up terrorism and that’s what this was.
Keep this up and it’s going to be more and often.
How many are related not sure but read a week ago 17 police officers have been killed by gunfire this year so far.

Except for the bad language, the rhetoric of Frank James doesn’t sound that much different from that of Yamiche Alcindor, moderator of Washington Week. I wouldn’t be surprised if James is a regular viewer of Washington Week. He and I may be two of the few remaining viewers left.