The cut includes an “area recognized as having high potential for oil discovery and development and therefore would be likely to be impacted if available to fluid mineral leasing and new construction.” 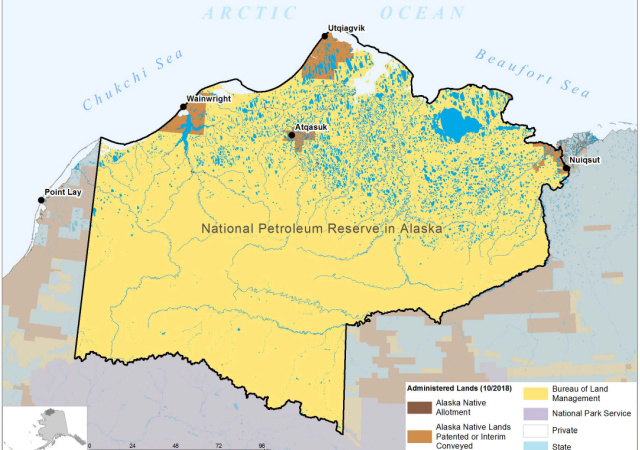 I shouldn’t complain because I know others have it worse. But still. Anything over $3 a gallon is a bit much for Oklahoma.

It might get worse because President Joe Biden ended a policy that makes millions of acres in Alaska unavailable for oil drilling.

The Bureau of Land Management decided to only leave 11.8 million acres (52%) of the land open. No one can touch the remaining 11 million acres (48%).

So over half of the site remains open but considering gas prices are through the roof and Russia is holding its energy sources hostage it’s time to drill baby drill!

BLM said the closure must happen “to protect and conserve important surface resources and uses in these areas.”

BLM even closed off an “area recognized as having high potential for oil discovery and development and therefore would be likely to be impacted if available to fluid mineral leasing and new construction.”

Yeah, let’s cut off a prime area. BLM claimed the area is important to numerous animals. All in the name of climate change, too:

By reducing the total amount of land in the NPR-A that is available to fluid mineral leasing and new infrastructure, the plan adopted by this Decision will likely result in less leasing over time. Depending upon the degree of development that may have occurred with increased leasing, this could result in reduced greenhouse gas (GHG) emissions compared to the plan under the 2020 IAP/ROD. While the adoption of this plan itself does not directly generate GHG emissions, such emissions are a reasonably foreseeable consequence of making available lands within the NPR-A to oil and gas leasing and development. As such, adoption of this plan supports the administration and department’s commitment to addressing climate change by reducing the amount of land within the NPR-A that is available to fluid mineral leasing.

The Alaskan senators are not pleased:

“This decision will prolong the pain for hard-working Americans and tighten Vladimir Putin’s grip over our allies,” Sullivan said in a joint statement with Sen. Lisa Murkowski, R-Alaska. “Needless to say, President Biden is not doing everything in his power to control prices at the pump or relieve average Americans’ pain. We now know, record inflation, unprecedented gas prices, and a despot wielding vast sums of the world’s petroleum supply will not deter Joe Biden in his relentless war on American energy production.”

“We need more domestic resource development, and areas explicitly designated for that purpose should be at the top of the list, not on the chopping block,” Murkowski said in a statement. “This decision also flies in the face of many of the Alaska Natives who live on the North Slope, who participated in the 2020 plan update and who supported its finalization. The administration is choosing to ignore them, while giving outside environmental groups everything they want.”

We mapped it out and declared it a petroleum reserve.
But you can’t drill for petroleum on parts of it.
You have to be a Democrat to see the sense in this.

No. You can Lease it but you cannot Drill it.

Leases and Drilling Permits seem to be mutually exclusive to Joe Biden’s lackeys.

Translation: Pay us every year for the lease, just don’t drill and make any income from it.

But Saudi should pump more oil. I guess they mean it when they say that logic is a patriarchal and racist construct.

Just 3 short weeks ago Sen. Murkowski excitedly announced how pleased she was to support Joe Biden’s nomination of Ketanji Brown Jackson to the Supreme Court. Three weeks later she announces she’s not at all pleased with Biden. What a sucker.

Now she can go home and tell Alaskans they can get their oil from Saudi Arabia.

She is and always has been a RINO stooge.

I hate these people

This is Obama’s third term. Hate him. Biden is just a puppet.

It’s quite possible to hate both…I’m doing it right now.

Albeit, none of them really compare with Little Anthony Fauci who has achieved a measure of depravity that even Hitler or Il’Duce would envy.

Every time there is a discussion of going for exploration and drilling in Alaska, the Left drags out pictures of nesting birds, rivers and streams to show what will be destroyed. Of course, most of the pictures are taken hundreds of miles away from the mud flats and tidal areas where the drilling would be. The caribou herds could care less and the birds do their thing. It’s about oil.. period. Birds? Thousands get chopped up by windmills and the Left cares little. Starving in a dark hole is green enough for the masses.

Remember when Don Young tried to get a bunch of Congresscritters to visit so they could see for themselves the reality . No one would go for fear of photos showing the drilling area far from the pretty valleys always shown by the media.

Umm, really, the petroleum is still there. Does anyone really think it will never be extracted?

Depends who is in charge. If it’s Democrats then no, no it won’t be extracted. The Left want to ban the use of fossil fuels and products. If you can’t use it then there’s no point extracting it. Of course just because you can’t use it doesn’t mean it isn’t needed.

The Russians will get it when they are finished with Ukraine and move to take back Alaska. We can buy the oil from them then, without directly contributing to Climate Change. /s

If the Dems have their way, then yes, that is exactly what will happen. We and all future generations must hold it as a sacred trust for some ultimate future generation which will never come.

Murkowksi is not even good at pretending to give a damn.

You have to give it to Democrats. When they commit to something to go full bore to get it!

And here they have committed to the Green future (tinged with black and red) like only Democrats can!

Show some guys Alaska, drill where you want to. Do you really think the Feds would send in troops?

No, you are totally wrong. There is nothing stupid about anything they do.

All of these things are integrated components of a meticulously engineered and well thought out plan being executed with exacting precision in a sequence all cumulatively designed to destroy the USA as we know it and bring us to our knees so we can be sold into globalist slavery.

One lesson the oil companies, their investors, and the politicians better learn from this is to make hay when the sun shines next time.

When the Left is finally chased out of office get in there with a max effort and drill. They don’t have to pump, just drill as many as possible and cap the ones they don’t need for the moment. Wells can’t be undrilled when the political winds shift again.

In case you are not aware of this, US strategy has always been to run the world out of oil then use ours. (The NA continent has more oil than the rest of the world contrary to what the left would have you believe)

This is no secret to anyone in the oil/gas industry and was “old news” when I got into it in the 80’s.

This is why the left is so rabid to keep us from producing and how we rose to energy dependence and leading producer in such a short time under Trump.

Thank the RINO for all of this.

I’m quite aware of it. I worked offshore in the Gulf during the supposed 1979 “Oil Crisis”. Even in the height of the “crisis” only 2 of the 10 fully operational wells we serviced were open. The rest were capped for future use.

My point remains that we need to drill everywhere we are permitted to in the times when we are permitted to. Because when the greenies get in power they inevitably lock the industry out of prime production areas such as this article describes.

Again, they can’t undrill a well and it would be a huge stretch for them to be able to stop production on an already existing one.