The law has Down Syndrome in its name, but it covers ALL disabilities. 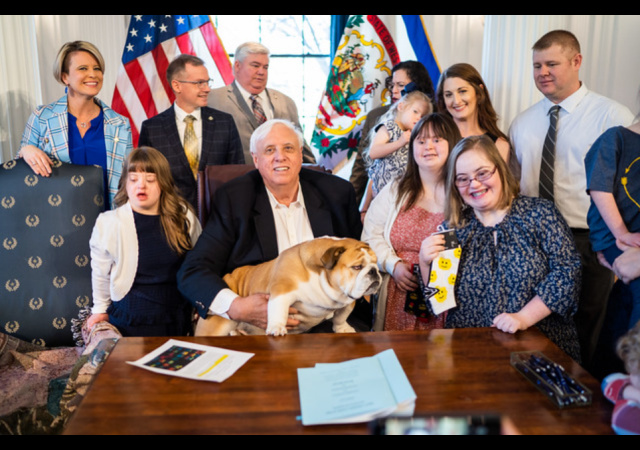 West Virginia Gov. Jim Justice signed the “Unborn Child With Down Syndrome Protection and Education Act” into law on Monday.

The law goes into effect on June 10. You can look at all the pictures from the bill signing on Justice’s Flickr account.

The law has down syndrome in its name, but it covers all disabilities:

“Because of a disability” means on account of the presence or presumed presence of a disability or diagnosis in a fetus including, but not limited to, chromosomal disorders or morphological malformations occurring as the result of atypical gene expressions.

A medical professional can bypass the law if there is “a medical emergency or a nonmedically viable fetus.”

The doctor faces punishment if he or she performs an abortion knowing the woman chose the abortion because of a possible disability.

The mother will not face any punishment.

Justice signed the law on World Down Syndrome Day. He said abortions based on disabilities “just seems terribly discriminatory in my book.”

There is not much evidence out there, but data tells us “that 67% of U.S. pregnancies where it is suggested the baby would be born with Down syndrome end in abortion.”

In 2008, a woman I know got a call that her child’s Down Syndrome test came back positive. But after the doctor looked at her chart again he realized it included two due dates: the one based on her last period and the true one based on the six-week ultrasound.

The lab went with the first due date, which was about two weeks from the true due date.

Thankfully she did not rush out and have an abortion. Instead, she and her husband started to make plans for life with a disabled child. Yes, I have permission to speak about this because she wants people to understand that blood tests aren’t always true.

She didn’t even have the blood test with her second child because it wouldn’t have mattered anyway.

The pro-life group Susan B. Anthony List applauded the signing and its president Marjorie Dannenfelser told Lifenews: “West Virginia takes a bold step forward today in the fight against eugenic discrimination in America. Research shows 99% of people with Down syndrome lead happy lives, yet instead of being cherished and included, far too often they are targeted for destruction in the womb where they are most vulnerable. We are proud to stand with West Virginians, the community of self-advocates and their loved ones calling on our nation to ‘embrace, not erase’ Down syndrome.”

“We are grateful for Governor Justice’s swift action and for all our local pro-life allies, especially our National Pro-Life Caucus members Del. Kayla Kessinger and Sen. Patricia Rucker, who worked tirelessly up to the final minutes of the session to get these vital protections enacted in the law. As we await a decision in the landmark Dobbs case, we hope the people of every state will soon have the chance to modernize our laws.”

That made for the perfect day to sign SB 647 and SB 468. Both bills give deserved respect to our Down Syndrome community.

Baby steps. That said, viability of baby and granny from the first to last heartbeat, from the first to last coherent nervous system impulses. Ultimately, there is no mystery in sex and conception, and no elective abortion a.k.a. planned parent/hood a.k.a. wicked solution for social, redistributive, clinical, and fair weather causes.

Meaninglessness gesture as the legislation is unconstitutional on its face and fails both strict scrutiny and the undue burden test.

Yeah, I went and read it.

Although I support the concept and agree with the reasoning (I’m anti-abortion except in extreme cases)- this law as it is written ( based on what was published) will not stand.

This is basically a “show legislation” and it will not survive a real challenge.

It makes me wonder how much of laws like this are written deliberately just for propaganda purposes knowing they have built in flaws that will otherwise render them ineffective.

How so, exactly. Lines 16-19 simply state that except in a medical emergency or a non-medically viable fetus “disability” cannot be the sole reason for seeking an a abortion. Can’t see where that would “pretty much end it”. Women can still get abortions on demand. They just can’t kill the baby because it might have a disability (Might because those tests aren’t always accurate.)

Milhouse kinda beat me to it further down but in those lines the “definitive standard” is simply “I said it wasn’t due to a disability”.

A different application of “don’t ask- don’t tell” because nobody is going to ask and the person obviously isn’t going to say the “magic words”.

That’s just on the wording- now lets look at the challenge.

By stating what amounts to an unqualified individual choice ( which doesn’t directly affect the population at large)- that’s tap dancing on equal protection in the 14th amendment which triggers the tests of undue burden and strict scrutiny because it looks (on the face of the plain language) like its directed toward a specific sect that doesn’t directly affect the citizenry at large.

Its so weak, I have to believe it was deliberately written that way.

“A different application of “don’t ask- don’t tell” because nobody is going to ask and the person obviously isn’t going to say the “magic words.”

“Excuse me, my good sir. I should like to purchase this box of ‘condoms’… strictly for the prevention of disease only!”

What we “believe” doesn’t really matter as SCOTUS has ruled on it (until and if it gets overturned) and it is the law of the land.

That same court created/supported law development equally applies to a lot of gun control laws, tax laws and some others but until challenged and defeated remain the law of the land.

And yet, according to the magic of American jurisprudence, once found unconstitutional, those very same laws that were “still the law of the land” right up until that point suddenly become “wholly void, and ineffective for any purpose; since unconstitutionality dates from the time of its enactment and not merely from the date of the decision so branding it. An unconstitutional law, in legal contemplation, is as inoperative as if it had never been passed.”

Griz asked recently what “retcon” meant. In politics, I cannot think of a better example.

‘Strict Scrutiny’ and constitutional are two different things. Cannot a legislature apply scrutiny to the laws they author? Cannot the executive apply scrutiny prior to signing the law (and isn’t a veto the result of scrutiny)? But no, only the courts have the ability to apply strictness to scrutiny.

Call it what it is: a means in which the judiciary usurps the legislative branch powers to strike down laws they do not agree with.

Yes they “should” strictly review bills for legality, interference with other laws and Constitutionality before ever submitting them but they usually don’t.

Personally, I think that’s deliberate and done so a politician can say they “did something” without actually doing anything.

Jackson took it further: every sworn public official was to support the constitution as he understood it, not as others told him.

I rather favor Jackson’s bold radicalism in this regard, but his social credit score is low on both sides of the aisle.

Show me the part of the Constitution that protects abortion. Is it the section with the tooth fairy?

No, its all about the passage of time and how time affects Constitutional things as they pass.

It’s the Ninth and Tenth Amendments. The ones that say that unless a power is explicitly delegated to the feds, the feds can’t assume it, and just because a personal right isn’t enumerated doesn’t mean it isn’t protected.

There were clever penumbras built into those amendments, behind where the fedguv hides all those things — like retirement planning, health care, drug prohibition, education, housing, national parks and federal lands, and many others also forbidden by those very same amendments — that nobody wants to talk about.

As soon as they invent a time machine, everybody that believes in abortion should be sent back to their mother’s womb and be aborted.

When this happens, we can control the passage of time

Actually, you don’t need a time machine for that. Just another retcon law.
We do retcon laws all the time.
25yo guy gets told in 1956, “Maybe you didn’t hit her, but it isn’t worth contesting — just plead down to misdemeanor domestic violence, you do 30 days community service, and all this goes away.”
Same guy, now 65yo, gets told in 1996, “Oh, you can’t own guns anymore because of your DV conviction 40 years ago.”
“But that’s ex post facto!”
“No, it isn’t ex post facto, because shut up!”

So I just call them retcon laws instead.

It’s a nice gesture, but it will have no practical effect because there’s no reason for the mother to tell the hit man why she wants the baby dead. All the hit man has to know is that she wants it dead; her reason is not medically significant, so s/he has no need to know it. Therefore the first thing they will tell customers, as soon as they come in, will be “Don’t tell me why you’re doing this; I don’t want to know”. Then they can proceed as usual.

So many of these abortions happen because the medical staff tell them to do it because of down syndrome.

My own mother was advised to abort my brother because of his down syndrome.

I appreciate we are on the same side but banning doctors from current behavior definitely makes a big difference, I consider you lucky that you have nobody in your family who was told to do an abortion by their doctor, however this law is a big deal.

I sympathize with all the players and all, but that governor is holding one ugly baby.