Russia continued its destruction of Mariupol, hitting a the famous Drama Theater. 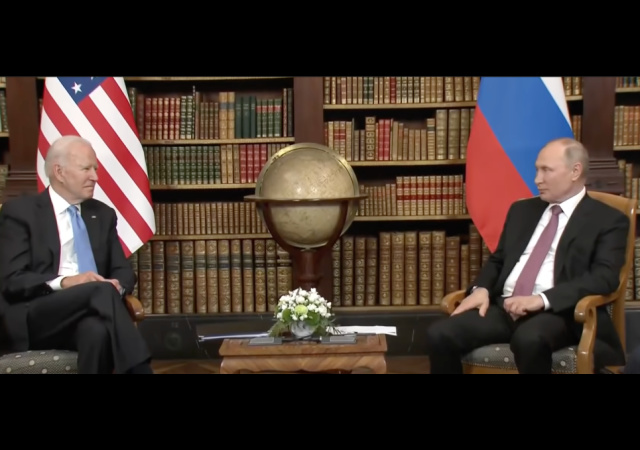 Fox News reporter Jacqui Heinrich asked if Biden considers Putin a war criminal. He said no, but it seemed to take him a minute to understand the question: “Did you ask me whether I would call… Oh, I, I think he is a war criminal.”

The answer did not please the Kremlin.

The Russians are trying to destroy everything in their path. Nothing is off-limits. Hopefully, this Drama Theater did not have refugees inside.

The famous Drama Theater in Mariupol.
De-nazified by a Russian air-dropped bomb today, on March 16, 2022.
Fuck you Russia. You’re going to pay for this. pic.twitter.com/ZQuGW6hL55

This was probably the fastest-developing city in Ukraine’s east pic.twitter.com/KJdcn8PkDZ

Zelenskyy told Lester Holt that “civilization is at stake” if Ukraine falls to Russia:

“Nobody knows whether it may have already started,” he told NBC News’ Lester Holt. “And what is the possibility of this war if Ukraine will fall, in case Ukraine will? It’s very hard to say…We’ve seen this 80 years ago, when the Second World War had started…nobody would be able to predict when the full-scale war would start.”

I don’t think Zelenskyy is being hyperbolic with his answers. Putin might not stop if he grabs Ukraine. He would definitely go after Moldova. Poland? Well, if history teaches us anything it’s that no one respects Poland’s sovereignty!

The Kremlin shot back as only the Kremlin would when someone gives them a spoonful of truth:

A spokesperson for the Kremlin, Dmitry Peskov, responded by saying that Biden’s comments were “unforgivable,” according to the Russian media outlet TASS.

“We consider unacceptable and unforgivable such rhetoric of the head of state, whose bombs killed hundreds of thousands of people around the world,” Peskov said.

Not helpful. Too bad our Vegetable-in-Chief can’t be kept away from the press’ questions.

He’s a walking, talking head of lettuce. The country knows it. Russia knows it. China knows it. People living in Timbuktu know it. Earlier this week he called Kamal Harris the first lady and Dr Jill had to correct him on live tv.

Thanks for poisoning any chance at decent relations with Russia in the foreseeable future Biden, you dribbling corpse.

How much more damage can this delirious ass with the reckless mouth do to our country before he dies/leaves office?

After the jug ears, regime bombing 3 countries we were not t war with DIctator Dementias comments seem to fall flat.

I am sorry for the horror that this has brought to the people on BOTH sides. Now would be the time for INTELLIGENT PEOPLE to discuss a solution! If Russia only wants a NEUTRAL country between them and a rag tag organization of incompetence called NATO then agree and get back to your corrupt ways! I’ll believe the Ukraine government when they release all their info on ALL the corrupt dealings of the bidens, kerrys, all the US people AND the Russians!

Maybe NATO and the US could agree to quit sponsoring Nazis, ballistic missiles, and highly questionable research on Russia’s border?

Usually a US President is expected to engage his brain before he opens his mouth. Slow Joe’s problem is that brain wise there is no there there.

There is no brain because puppets don’t have brains.

I would care, but it seems Russia is supposedly negotiating on behalf of the U,S, with Iran.

So evidently Sleepy Joe isn’t THAT worked up about Putin being a ‘war criminal’.

What’s hilarious is that this is the theme of about 80% of all known con games.

The Obama/Biden/Clinton/McCain/Biden wars in the Spring series. Trump cut off one leg of Obama’s world war in Central America. Trump/Putin cut off another leg in the Middle East. After 32 trimesters, Putin has a chance to end Biden/Zelensky’s war in the Slavic Spring that has been a progressive risk to the Ukrainian people, and preemptively expose Wuhan 2.0, and, perhaps, other illicit enterprises that fuel corruption in the land at the edge of civilization. Biden could have taken the Clinton plea to plausible denial: what difference, at this point, does it make. Instead, he spoke truth through projection, confused himself, and destroyed his credibility. Will not one relieve his “burden” h/t Obama.

The quickest and easiest way for Putin to stop the 8 year long war in Ukraine would have been to withdraw his troops and stop funding the people fighting their own democratically elected government.

Recklessly tossing about labels and descriptions regarding Russian actions is not helpful in the immediate term and is damaging in the longer term to US interests. Just for a start the US has in the very recent past:
1. Utilized cluster munitions
2. Killed civilians
3. Damaged/destroyed civilian infrastructure

Throwing out charges of war crimes based on those three examples for their immediate propaganda value is incredibly reckless as it isn’t a stretch to place similar labels on the US for it’s own actions. We don’t get a pass because we view ourselves as the ‘good guys’ with better motives than the ‘evil’ Putin. Rest assured that the same international collection of keep America weak NGO, domestic agitators and Nations will be seeking to do the same to our leaders and our Armed Forces.

Warfare is by it’s very nature destructive. People are killed, lives disrupted, limbs are lost, orphans are created, migrants flee, infrastructure is damaged, buildings are toppled. That is why warfare should be the last resort despite the urging of a great many people who call for the US to send it’s Sons and Daughters into harms way while always seeming to exempt themselves and their children. IMO, they are now making the same demands on the Ukrainian people.

Not in the West it isn’t; see the concept of a just war. Nor the in the East nor anywhere else on the planet. The victors write the history after the war or conquest. That doesn’t make it less tragic, destructive or wasteful. War is a necessary part of Statecraft and unless we achieve an unlikely libertarian utopia world-wide we will continue to have warfare. Even then any contact with an alien species is much more likely to resemble the example of Cortez and Pizarro than some benign encounter with a peaceful and benevolent group of explorers.

He may or may not capture all of Ukraine but I doubt it. If he does and decides to go after Poland next, he’s stupider than anyone could think. Does he really think that after the centuries of disrespect (undeserved in my opinion) and then the 70 plus years of Soviet control, that Poland will just lie down and welcome them back? At least think of the WWII years and how it took the vaunted German blitzkrieg many weeks to defeat the Poles with their horses and small rifles and itty-bitty artillery. Then the years of partisan trouble and then think of the Jews in the ghettos who fought and fought even though out-gunned and out-numbered. Then the 35+ more years of Soviet domination and how the Poles have persevered through all of this.
If, after 30 years of independence with retraining and arming, Putin thinks the Poles will welcome him back in? He’s just plain foolish. He underestimates the Poles.
Besides, he can barely afford what he’s doing now. He invades Poland at the risk of bankrupting his country and suffering a humiliating defeat at the hands of the Polish people. They will never give in to totalitarianism again.

There are two ways to look at this. First – the logical way – is to look at how laughably inept his military campaign has been and from that, believe that Putin isn’t stupid enough to then try his hand at a NATO country because that would be a first-class ticket to the mother of all ass-whoopings…..probably ending in a nuclear exchange.

However, there is another way to look at it, the way that Roman Emperors looked at situations like this: So long as the Legions are out campaigning, they’re not in Rome participating in my coup.

I obviously don’t know Putin. But, he strikes me as the kind of guy who has read his fair share about the Roman Empire. He may choose the latter believing that’s his best chance for survival.

From 2005 through 2013 I spent a lot of time in Russia. All over the country including many of the western areas where they amassed the troops etc. prior to the invasion. I don’t believe that Putin is acting 100% rationally. He has learned, to his chagrin, that his equipment is no match for even the small weaponry that NATO has i.e. Stinger, Javelin. The supposed explosive armor on his tanks is useless against the Javelin. He may not care though because Russia has, throughout its history, just thrown troops and more troops at the battle hoping to overwhelm the enemy that way. I don’t believe he will go any further than Ukraine because 1 – he cannot afford it. He cannot afford the supposedly good weapons that are produced in Russia, he can only sell them to other countries. 2 – He will bankrupt his country. He may be making $$ from selling oil but only at discount prices. He doesn’t care a whit about the average Russian soldier or citizen and will keep his people starving and keep throwing conscripts at Ukraine, And 3 – He will not allow himself to be seen as being defeated or weak so he may use WMD of some sort. Even though Russia is signatory to the Chemical Weapons Treaty (includes bio as well), that doesn’t mean he hasn’t been making them.
I don’t think he sees the rationality of not doing these things.

Burning up so much ordnance now would require a major refit to even think of going against Poland or Hungary…. but Russia cannot project power quickly and with the lack of speed shown it would be The Second Great Tank Plinking as in Iraq.

Well, for one thing, Poland IS in NATO.
Blackletter response, right there.

“it seemed to take him a minute to understand the question”
It was, in fact, the correct next question on his well-prepared script of questions but… well, Joe’s ears have started playing up recently…

If they were smart they would stop directing their questions to the monkey and ask to speak to the organ grinder.

Here’s an odd publication, apparently in Ukrainian only, and it seems to come from the CIA, or at least somebody in Langley VA, as well as Warsaw Poland. They are saying Russian speaking immigrants anywhere are a threat, and down the page celebrate Stefan Bandera. Russia complained about this at the UN so I searched it up.