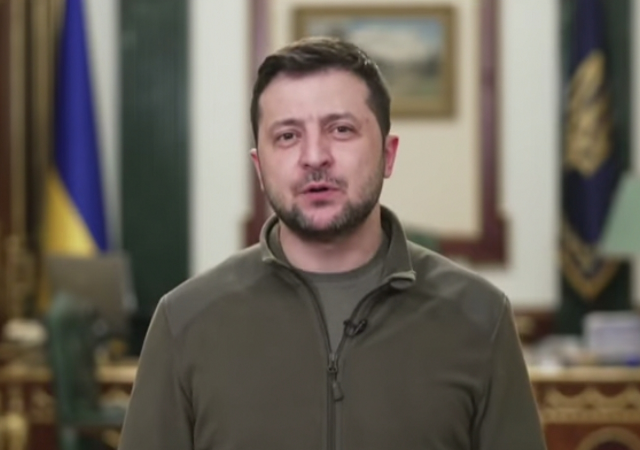 Ukraine is preparing a “relentless defense” of Kyiv as Russian forces close in on the capital, the office of the Ukrainian president said on Sunday.

In a videos released late Saturday night, President Volodymyr Zelensky rallied his beleaguered  nation to continue their heroic resistance against the invading Russian forces. “The Russian invaders cannot conquer us. They do not have such strength. They do not have such spirit. They are holding only on violence. Only on terror. Only on weapons, which they have a lot,” he said.

After 18 days of stiff resistance from Ukrainian soldiers and volunteers, the Russian grounds forces are moving closer to the capital. “Russian forces appear to be making progress in their advance on Kyiv,” The UK TV channel SkyNews noted.

Fierce fighting has been reported from across the country. “Russia bombarded cities across Ukraine on Saturday, pounding Mariupol in the south, shelling the outskirts of the capital, Kyiv, and thwarting the efforts of people trying to flee the violence,” The Associated Press reported Sunday morning.

The conditions are worsening in the encircled city of Mariupol. “Ukraine’s besieged port city of Mariupol is running out of its last reserves of food and water, the city council said on Sunday, adding that Russian forces blockading the city continued to shell non-military targets,” Reuters reported. At least 2,1oo people in Mariupol have been killed so far in the Russian offensive, Ukrainian officials say.

Initial reports on Sunday morning suggest that Russian troops fatally shot U.S. filmmaker and former The New York Times contributor, Brent Renaud, outside Kyiv.  Another journalist, named only as Juan, was also injured in the incident. “US journalist Brent Renaud is shot dead in the town of Irpin outside Kyiv, the first reporter to die in this conflict,” the BBC noted.

The British newspaper Independent reported the details of the shooting:

On 13 March, Russian forces opened fire on a car with foreign journalists inside near Irpin, targeted with intense shelling by Russian forces in recent days.

A US reporter said in a video shared by Ukraine’s Parliament that Russian forces near a checkpoint opened fire on a car with foreign journalists inside as they were on the way to film people fleeing Russia’s assault.

Anton Gerashchenko, an adviser to Ukraine’s interior minister, said in a statement that Brent Renaud “paid with his life for attempting to expose the insidiousness, cruelty and ruthlessness of the aggressor”.

Response from a New York Times spokesperson in regard to the death of Brent Renaud in Ukraine. pic.twitter.com/K11eW685yr

As Putin conducts an all out invasion of Ukraine, the Russian military offensive is advancing closer to the NATO territory. On Sunday, massive Russian missile barrages hit a Ukrainian military base just 15 miles from the Polish border, killing 35 people and leaving 134 injured.

The base has been linked to NATO, the SkyNews reported. The strike took place a day after Russia declared U.S. and NATO arms shipments to Ukraine a legitimate military target. Moscow “warned the U.S. that pumping weapons from a number of countries it orchestrates isn’t just a dangerous move, it’s an action that makes those convoys legitimate targets,” Russian Deputy Foreign Minister Sergei Ryabkov declared on Saturday.

More than 30 Russian cruise missiles targeted the sprawling facility that is less than 25 kilometers (15 miles) from the closest border point with Poland, according to the governor of Ukraine’s western Lviv region. Poland is a transit route for Western military aid to Ukraine, and the United States increased the number of America troops deployed there.

As Russian forces intensify their assault on Ukrainian cities, President Zelensky repeated his call for peace talks between Kyiv and Moscow. On Saturday evening, the Ukrainian president spoke on phone to Israeli Prime Minister Naftali Bennett.

Zelensky “suggested to Bennett that Jerusalem host the ceasefire talks between Ukraine and Russia,” the Israeli news channel i24News reported Saturday. The conversation “dealt with ways to end the fighting in Ukraine and the efforts that Israel is making on this matter,” Israeli prime minister’s office said.

Continued dialogue with 🇮🇱 PM @naftalibennett. We talked about Russian aggression and the prospects for peace talks. We must stop repressions against civilians: asked to assist in the release of captive mayor of Melitopol and local public figures #StopRussia

Ukrainian President Volodymyr Zelensky suggested on Saturday that negotiations between Ukraine and Russia to end the war could be held in Jerusalem.

The Ukrainian leader also told media he believed Israel could provide security guarantees for his country, and said he hoped Prime Minister Naftali Bennett would have a positive influence on negotiations. (…)

“We generally support mediation by anyone,” he said in an answer to a question about Israel’s potential role, posed by a reporter for Haaretz. “But I wouldn’t call Prime Minister Bennett ‘anyone.’ You can play an important role because Israel is a country with a rich history.”

Zelensky added that Ukrainian immigrants were among Israel’s founders, “who brought with them their history and their desire to build a great country, as it is now. So it’s not bad at all for us to have such mediation.”

Since beginning of the Russian invasion, Prime Minister Bennett has been engaged in diplomacy to put an end to the military offensive. Last Saturday, the Israel leader flew to Moscow for a 3-hour meeting with Russian President Vladimir Putin.

Russia is creating ‘pseudo republics’ in regions that have fallen under its occupation, President Zelensky said in his nightly address on Saturday.
“The occupiers on the territory of the Kherson region are trying to repeat the sad experience of the formation of pseudo-republics,” the Ukrainian leader warned. “They are blackmailing local leaders, putting pressure on deputies, looking for someone to bribe.”

The pattern of creating Russian-controlled puppet republics is similar to the one carried out in the eastern Ukrainian provinces of Donetsk and Luhansk which fell under the Russian occupation in 2014.

The elected mayor are taken way at gun point after Russians encircled the city of 160,000 people. The Ukraine’s presidential office “shared a video on the social media site Telegram that appears to show the moment Mr Fedorov was captured and escorted across a square in the city centre,” the UK broadcaster SkyNews reported.

Is Zelensky even in Kyiv/Kiev? Last I heard, they’re was some question as to whether he was actually there, or had slipped away to Poland.

It remains hard to tell. All sides are lying like rugs and accusing one another of engaging in propaganda.

This appears to be true

It took Hitler 40 days to take France, a much smaller country than Ukraine.

My, my, my, how things change. What are we to think about that regime that is currently in power in Ukraine?

At some point soon the Ukrainian government is going to need to face up to the reality of the situation. The Russians are moving into position to shell the defensive positions set up in Kiev. That will be bloody and destructive. The Russians don’t need to take and occupy Kiev; they seem to have operational mobility in the south and Odessa is a more important objective, IMO.

Ukraine is losing… that’s all I know right now.

When Germans killed untold millions of Jews in the holocaust Whoopi Goldberg said that doesn’t concern black people because, “It was just “white people fighting each other.”

But now Whoopi says what we’re seeing in Ukraine is nothing short of heroics … with Zelensky refusing to leave his people behind defending his white country from other white people.

questionable that Russkies are white

I’m beginning to think this is theatrical in nature.

I find that rather hard to believe, although he’s already been begging Belarus so who knows.

It’s interesting. Russia have suffered heavy losses, failed to achieve objectives but haven’t committed their frontline troops. They’ve got a lot of hardware and trained forces that they’re keeping in reserve – I think Putin genuinely believes Russia will be attacked if they don’t retain combat strength across their Western borders.

Israel’s Prime Minister has engaged in diplomacy with Russia to put an end to the conflict. Last Saturday he flew to Moscow for a 3-hour meeting with the Vladimir Putin.

In the olden days it would have been the USA who would have assumed the position of world leadership. Today our reponse is to send Kamala Harris to Poland to show them how to laugh like a clown.